Regular readers of my weekly column are accustomed to the annual league tables published in May following the end of the annual reporting season. Most companies whose equity is listed on the Malta Stock Exchange have a December year-end and therefore the annual financial statements must be published by the end of April. One of the companies with a different year-end is Simonds Farsons Cisk plc. Farsons have a January financial year-end and last week the 2016/17 annual financial statements were published.

As I have stated over recent years, the return on equity (ROE) is a very important indicator which should be monitored by investors whenever companies publish their financial statements. By way of reminder, the ROE measures the profit generated by a company from the amount of money invested by shareholders. This ratio is calculated by dividing the annual profit figure by the average level of shareholders’ funds. Profit after tax is the best measurement since it shows the actual returns achieved by the company in any financial year.

The league table provides a good overview of those companies generating the highest returns and also enables investors to gauge the changes in returns achieved by companies from one year to the next.

The new entrant PG plc, which was only listed last week following the recent Initial Public Offering, tops the ROE league table with a return on equity of 26.4%. PG has an April year-end and the Prospectus provided the forecasts for the 2016/17 financial year which came to an end on 30 April 2017 and a projection for the 2017/18 financial year which commenced on 1 May 2017 and runs through 30 April 2018. In the case of PG, the ROE for the current financial year ending 30 April 2018 is being reported as a result of the fact that it is the first year during which the three businesses are in operation for a full 12-month period following the opening of the Pama retail mall in November 2016. PG is a highly profitable business and the Directors are estimating that in the 2016/17 financial year, EBITDA and profits after tax would have climbed by 44.8% and 59.4% to €13.1 million and €7.45 million respectively. This significant rise is as a result of a full 12-month operation of the Pama supermarket and the initial period of operations of the Pama retail mall. Meanwhile, the projection for the current financial year to 30 April 2018 shows a more modest 10% rise in EBITDA to €14.5 million and an increase of 12.9% in profit after tax to €8.4 million. It is worth highlighting that the projections are based on the assumption that PG will only generate the minimum rent amount from most of the outlets within the retail mall as well as those situated adjacent to the Pama shopping complex.

Malta International Airport plc continues to rank among the most profitable companies in comparison to its equity base. MIA has been among the most consistent performers under this metric. It registered double-digit ROE’s for over a decade and has consistently returned an ROE in excess of 20% for the past six years. The ROE during 2016 of 25.8% is another remarkable achievement and represents a marginal improvement over 2015. Although MIA’s net profit in 2016 grew by 8.9% to another fresh record of €20.98 million, shareholders’ funds increased by 9.5% to €85.1 million as the company has also been retaining an increased level of profits to fund some of its future ambitious developments. MIA has regularly stated its intentions that once planning permits are received, it will develop another commercial property this time complimented by a business hotel. Despite the exceptional passenger growth in recent years, there is a very clear indication that 2017 is going to be another record year in terms of passenger volumes and MIA’s profitability should naturally reflect this trend.

It may be very surprising to many that the smallest company on the MSE, Santumas Shareholdings plc, also ranks among the highest ROE generators. During 2016, this company generated a profit after tax of €2.14 million which translates into an ROE of 24.1%. The company’s performance in 2016 was largely impacted by unrealised gains in the fair value of the company’s investment properties totalling €1.36 million and a notable increase in the fair values of its financial assets of €0.71 million. 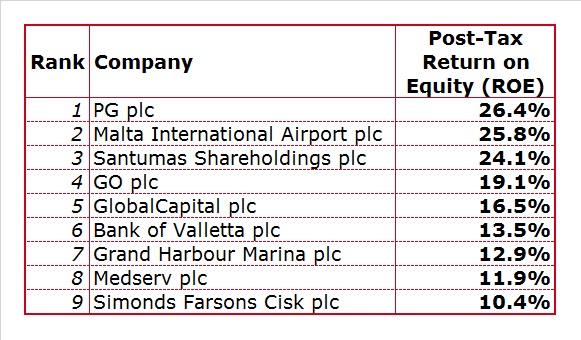 In recent years, GO plc consistently generated a double-digit ROE but it was rather volatile from one year to the next reflecting a number of one-off items impacting the group’s financial performance. In 2016, GO achieved a return on equity of 19.1% compared to 27% in 2015. Apart from the improved operational performance, the ROE in 2015 was boosted both by a fair value uplift of €7 million related to the option which GO held in relation to its investment in the Cypriot company Cablenet as well as from a reduction in shareholders’ funds following the spin-off of Malta Properties Company plc at the end of 2015. Meanwhile, the 2016 performance was positively influenced by the consolidation for the first time of the financials of the Cypriot company Cablenet following the acquisition of majority control as from 1 January 2016. During last week’s Annual General Meeting, GO’s acting CEO provided the EBITDA figures for the Cypriot subsidiary. Given the strong uplift in EBITDA over the past three years in Cyprus and the equally positive performance in Malta, GO should continue to rank among those companies achieving a double-digit ROE.

Another surprise revelation depicted in the ROE league table is the 5th position of GlobalCapital plc with a return on equity of 16.5%. Notwithstanding that the equity base more than doubled to €15.1 million during 2016 following the rights issue exercise undertaken in the first half of the year, the group had another profitable year. Given the nature of the group’s business activities, its performance is highly influenced by changes in the fair values of its financial and property investment portfolios. The Directors recently reported that the intention is to conduct a further rights issue and this can therefore lead to lower returns on equity in 2017.

Medserv plc is the company that lost most positions in the league table. It dropped from 1st position with a return on equity of 40.5% in 2015 to 8th place with a return on equity of 11.9%. The decline in the ROE reflects both the disappointing financial performance in 2016 but also the increase in the shareholders’ funds at the start of 2016 to partly fund the acquisition on the company in the Middle East for USD45 million. Medserv published its financial projections for 2017 and the group’s profitability and return on equity should improve given the current business pipeline.

In the banking sector, Bank of Valletta plc remains the most profitable bank and the only one with a double-digit ROE. In their last financial year to 30 September 2016, BOV achieved a return on equity of 13.5% and this was confirmed once again in the interim financial statements to 31 March 2017. BOV also announced that within the next 12 months it will be conducting a capital raising exercise of €150 million which will also naturally dilute the ROE going forward.

While the ROE is a very important indicator related to the profitability of a company, given the profile of many local investors and their main objective of generating a regular income stream, the dividend yield is probably a more commonly used metric when contemplating an investment decision. In next week’s article, I will publish the updated dividend league table showing the companies with the highest dividend distributions to shareholders.