GO plc (previously Maltacom plc) has been listed on the Regulated Main Market of the Malta Stock Exchange since June 1998 following the partial privatisation when the Government of Malta offered 40% of the issued share capital at an equivalent price of €2.0964 per share.

The Government of Malta held its majority stake until 2006 when it sold its 60% shareholding to Emirates International Telecommunications Limited (a member of Dubai Holding) at a price of €3.6198 per share. At the time, there was no requirement for a mandatory takeover bid since Chapter 11 of the MFSA Listing Rules came into force shortly afterwards.

The recent rise of GO’s share price to its highest level over the past 12 years coupled with the important announcement on 3 October related to the partial sale of its shareholding in BMIT Group – the data centre and cloud services arm – warrants a review of the company’s eventful journey since 2006 ahead of what could possibly be the company’s next stage of development.

Soon after completion of the entire privatisation process in 2006, Maltacom acquired Multiplus Ltd in February 2007 and entered the TV market. With the acquisition of Multiplus, Maltacom became Malta’s first quadruple-play telecoms operator offering fixed-line and mobile telephony as well as internet and TV services.

In June 2007, the company embarked on a major internal reorganisation and rebranding exercise. Through this process, Maltacom became GO plc and all of its various brands and services, namely fixed line telephony via Maltacom, internet services via Maltanet, pay-TV via Multiplus and mobile telephony via GO Mobile, were grouped together under one brand making it also possible for the company to offer bundled services.

In January 2008, GO announced that together with its majority shareholder, Emirates International Telecommunications Limited (EITL), it acquired a 21% stake in the Greek telecoms company Forthnet S.A. for the sum of €93.8 million. GO and EITL continued to build up their stake in Forthnet through the purchase of additional shares on the Athens Stock Exchange as well as through a capital raising exercise conducted by Forthnet in 2008 to acquire the Greek pay-TV operator NetMed NV for a total consideration of nearly €500 million. Following completion of the rights issue process, together with the additional shares purchased on the market throughout 2008 and 2009, GO and its majority shareholder had built up a total stake of just over 37% in Forthnet by the end of 2009.

The transformation of GO following its full privatisation in 2006 continued at a fast pace when in April 2009 the company announced that it acquired 60% of the issued share capital of BM IT Ltd, BM Support Services Ltd and Bell Net Ltd for €9.5 million. This was followed by a further investment of €8 million in July 2011 for the acquisition of the remaining 40% shareholding in these three companies. In total, GO paid €17.5 million for the entire share capital of the Bell Med Group thereby enabling the company to take full ownership of a data centre operator.

Meanwhile, however, the financial situation of Forthnet started to worsen considerably, partly reflecting the fast deteriorating macro-economic situation in Greece which eventually led the country to impose various harsh austerity measures and repeatedly ask for bailout funds. These events impacted GO’s investment in Forthnet and constrained GO to recognise sizeable losses and impairments in its financial statements between 2008 to 2011 until the value of GO’s investment in Forthnet was completely written-off even though GO today still holds 15.19% of Forthnet.

It was a particularly difficult period for GO shareholders at the time. In fact, in addition to the sizeable impairments related to Forthnet, GO also had to shoulder substantial provisions for pensions as well as early voluntary retirement costs. All these reflected in a sharp drop in the profitability of the company. In 2008, GO shocked the market with a loss of just over €2 million from a net profit of €17 million the previous year. The degree at which GO reported losses aggravated considerably in the subsequent three years as the company posted a net loss of €6.73 million in 2009 and further losses of €19.2 million in 2010 and €51 million in 2011.

The difficult times for GO also translated into lower dividends for shareholders which, in turn, dampened investor sentiment towards the equity. In fact, in 2009, GO reduced the net dividend per share for FY2008 by almost 21% to €0.12 from just over €0.15 the previous financial year. The net dividend per share was cut by a further 20% for FY2009 to €0.10, and eventually halved to just €0.05 per share for FY2010. Moreover, the company did not distribute a dividend for FY2011 until the regular distribution of dividends was thereafter re-instated and the amount of dividend increased consecutively in recent years from €0.07 per share in 2014 to €0.13 in 2017.

GO’s share price dropped considerably between 2008 and 2012 from the €2.50 level at the start of 2008 to a low of €0.712 in early May 2012. However, investor sentiment towards GO started to recover rapidly when the company decided to completely write-off its investment in Forthnet and re-introduce the distribution of dividends. Furthermore, despite the very bad experience from the overseas investment in Forthnet, this did not discourage the Board of Directors of GO to invest again internationally in order to widen the strategic ambitions of the group given the limited growth opportunities in the Maltese telecoms market. 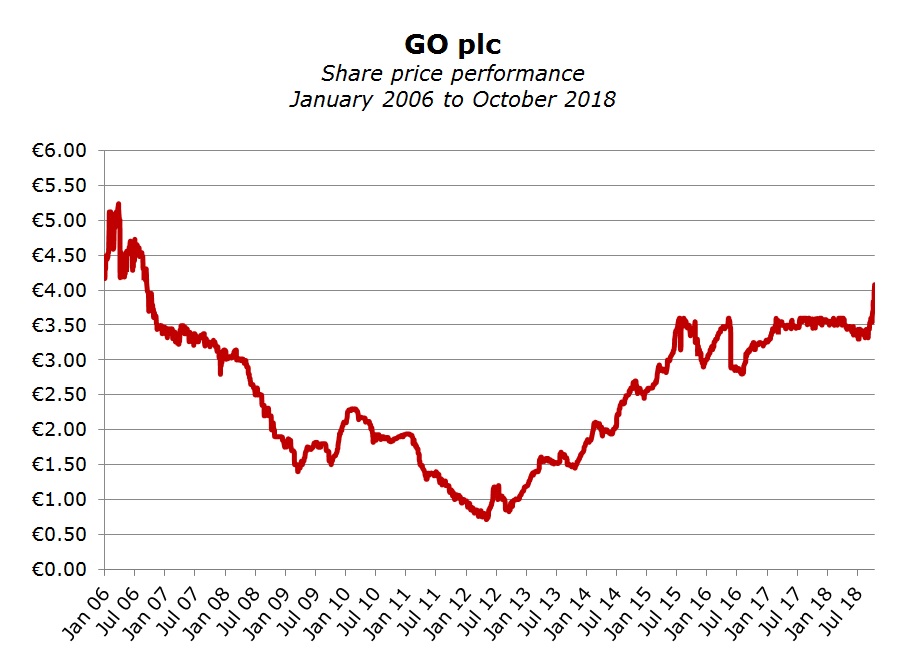 In September 2014, GO initially acquired a 25% stake in the Cypriot company Cablenet Communications System Limited (Cablenet) and also extended Cablenet a loan of €12 million which was convertible into equity. Moreover, GO had also obtained an option to acquire majority control of the company. In January 2016, GO converted its loan into equity thereby increasing its equity investment from 25% to 45% of the issued share capital of Cablenet. Concurrently, GO also exercised its option to acquire a further 6% of the issued share capital, bringing its total stake to 51% and thereby acquiring majority control of the Cypriot company as from January 2016. In total, GO invested €15 million for its 51% stake in Cablenet. The investment had a carrying value of almost €29 million in GO’s financial statements as at 31 December 2017, reflecting the original investment as well as the positive fair value adjustments registered in 2015 (€6.95 million) and 2016 (€6.08 million)

The investment in Cyprus and the consistent performance of the company from its local operations helped it improve the dividend distribution to shareholders as from 2013 and investor sentiment towards the company improved. The share price recovered to €1.825 by the end of 2013, rallied by nearly 40% in 2014 and climbed a further 34% in the first half of 2015.

However, the market was then taken by surprise in July 2015, when GO announced that its majority shareholder expressed its intention to seek to dispose of its 60% shareholding. The share price was particularly volatile at the time as a result of the uncertainty on the identity of the new shareholder and the eventual trade price.

Another major change took place in October 2015 due to the spin-off of its property holding company, Malta Properties Company plc. On 19 October 2015, GO approved a net interim dividend of €0.3313 per share by way of a distribution ‘in kind’ of the entire shareholding in Malta Properties Company plc to GO’s shareholders pro rata to the number of shares held. Each GO shareholder at the time was allotted one MPC share for every GO plc share held.

2016 was a milestone year for GO. In January 2016, GO increased its stake in Cablenet to 51% and at the same time it also acquired a 51% stake in Kinetix IT Solutions Limited. Meanwhile, in May 2016, GO announced that it selected La Société Nationale des Télécommunications (Tunisie Telecom) as the final preferred bidder for the 60% stake of EITL at a price of €2.87 per share. In view of the MFSA Listing Rules, Tunisie Telecom submitted a voluntary bid for the entire issued share capital of GO plc also at a price of €2.87 per share. This represented a sizeable discount from the share price at the time.

The share price immediately tanked on the news of the terms of the voluntary takeover bid and in July 2016, GO announced that TT ML Limited (a subsidiary of Tunisie Telecom) became the new majority shareholder with a stake of 65.4% stake, implying that it acquired an additional 5.4% from the general public during the takeover bid.

Another major change is now expected following the surprising announcement on 3 October that GO will be seeking to dispose of up to 49% of its shareholding in BMIT Technologies plc (BMIT) through an initial public offering on the regulated main market of the MSE.

An extraordinary general meeting is being held on 3 December 2018 for GO’s shareholders to approve the partial sale of BMIT. It is estimated that this disposal will raise up to €49 million which are earmarked to “deliver returns to shareholders”. Prior to the EGM, shareholders of GO will be receiving a circular providing further information on the proposed IPO of BMIT.

It is important for GO shareholders to read this circular and to attend the EGM to hear about the company’s plans for the uses of these proceeds. The changes within the GO Group over the past 12 years are quite remarkable indeed and it is hoped that GO will continue generating added value to shareholders in the future.