Last week, the Treasury of Malta issued its first ‘Annual Borrowing Plan’. This replaces the ‘Indicative Calendar’ published by the Treasury in previous years. The 2018 Annual Borrowing Plan covers the projected borrowing requirements of the Government of Malta for this year. The plan reveals that the total amount of issuance of Malta Government Stocks (“MGS”) during 2018 is not expected to exceed €350 million which are principally earmarked to finance the redemption of seven MGS’s during the course of this year totalling €391 million. Moreover, the Treasury explained that it will be issuing three different types of securities – conventional fixed rate MGS; floating rate MGS linked to the six-month Euribor that are primarily targeted to institutional investors; as well as Malta Government Retail Savings Bonds similar to the savings bonds issued in 2017. The Treasury is aiming to spread its issuance programme over 3 to 4 issues whilst the maturity structure will be a mix of short and medium to long term MGS.

Regular readers of my column may recall the article published last month in which I provided an overview of the most important developments that took place in the MGS market in 2017. In this article I explained once again how the complex dynamics of international bond markets impact the performance of the MGS market since movements in MGS prices largely reflect changes in bond yields across the globe, particularly in the eurozone. I also made reference to the fact that in 2017, the Treasury only raised a total of €357.8 million (nominal) on the primary market which was below the €371.8 million of maturing MGS’s. The amount of MGS raised in 2017 was also far below the amounts raised on the primary market in previous years, and also well below the maximum amount envisaged at the start of 2017 of €600 million.

It should not be a surprise that the maximum amount of MGS expected to be issued during 2018 of €350 million is less than the amount of €391 million of maturing MGS’s given that the Government is now running a budget surplus. In other words, the Government is currently generating higher revenues (from its various sources of income including taxes, duties and the IIP scheme) compared to its expenditure (namely salaries to Government employees, social security benefits and capital projects). This situation contrasts sharply with a budget deficit when the revenue generated by the Government fails to cover expenditure, thus the need to raise funds through fresh borrowings to fill the funding gap.

In last month’s article I also referred to the very weak demand by retail investors for MGS during 2017. In fact, following the unsuccessful issue in February 2017, when subscriptions from retail investors for the three new MGS’s issued by the Treasury of Malta amounted to a mere €19.1 million (nominal), no other issuance was targeted at retail investors with the exception of the 62+ Savings Bonds in August and October 2017 in which the Government raised a further €100 million. However, these are different instruments and cannot be compared to the traditional MGS’s since the rate of interest was much higher and the bonds are also not listed on the Malta Stock Exchange.

Following last year’s developments, will investors shun the upcoming MGS issues again this year or has investor sentiment improved since then?

The RF MGS Index dropped by 3% in 2017 and MGS prices continued to decline during the first 5 weeks of 2018 with the Index shedding a further 0.8%. This is not a good omen ahead of the new MGS issuance in the coming weeks. Until early last year, a number of investors had subscribed for MGS’s purely for speculative reasons following the hefty gains in previous years especially following the start of the quantitative easing programme by the European Central Bank in March 2015 which led to a sustained rally in bond prices across the eurozone including Malta.

So why are MGS prices declining again and what is the immediate outlook?

The prices and corresponding yields of sovereign bonds in Malta reflect global macro-economic forces and actions by the major central banks. Yields on sovereign bonds have risen sharply in recent weeks (bond prices plunged) amid what the International Monetary Fund (“IMF”) described as the “broadest synchronised global growth upsurge since 2010.” This, in turn, is exerting significant pressure on the world’s major central banks to tighten monetary policy (increase interest rates) in the months and years ahead. Amid this increasingly evident upturn in global economic growth, the influential bond strategist Bill Gross declared that a “bond bear market [is now] confirmed”. The benchmark ten-year German Bund yield rose to an over two-year high of just above 0.77% earlier this week compared to 0.43% at the end of 2017 and the all-time low of minus 0.20% in July 2016. Other benchmark yields are also at multi-year highs reflecting the new cycle in bond markets. The ten-year US Treasury yield rose close to a four-year high of above 2.88% last Monday and similarly the ten-year UK Treasury yield of 1.60% is at its highest level since early May 2016. 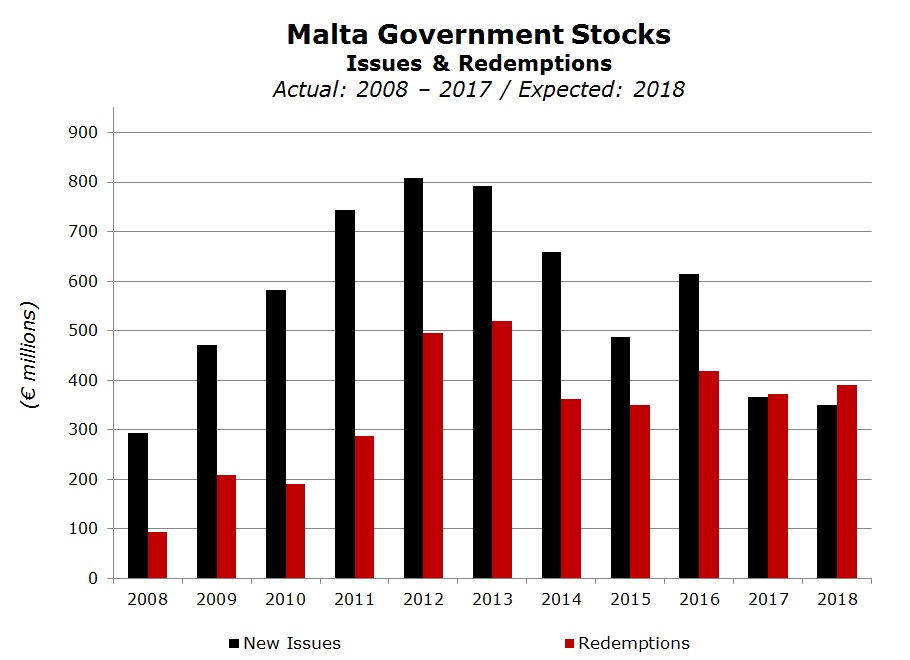 Maltese investors should also appreciate the fact that MGS prices could have easily posted sharper declines in recent weeks were it not for two important developments that possibly cushioned the impact from the steeper decline in eurozone bond prices as yields rallied strongly.

On the one hand, there were some very positive assessments about Malta both from credit rating agencies and also from some influential supranational organisations such as the European Commission and the IMF. Fitch Ratings lifted its long-term rating on Malta to “A+” from “A” on 11 August 2017 while Standard & Poor’s (“S&P”) revised its outlook on Malta to “Positive” from “Stable” on 29 September 2017. S&P maintained an “A-“ rating but the positive outlook reflects a high probability that the world’s leading credit rating agency could raise its ratings on Malta again over the next 24 months. The further confirmation of the improving fundamentals of the local economy came last week when the IMF published its latest review of the Maltese economy. In its report, the IMF noted that “Malta remains one of the fastest-growing economies in Europe” and recommended the country to “focus on sustaining the strong performance … and making growth more inclusive.” The important credit rating upgrades as well as the positive comments from the European Commission together with the IMF could have very well contributed to a softening impact on MGS prices since Malta may now be deemed to be less risky than in the past.

In some of my articles over the years I had observed how the determination of the indicative MGS prices published by the Central Bank of Malta daily is based on movements in the benchmark German bund yield as well as movements in yields of other countries with similar ratings to Malta. Although the Central Bank never published the criteria used for the determination of its MGS prices on which the RF MGS Index is based, it was very evident that movements in the bond prices and yields of Spanish government bonds have a sizeable weighting in the overall composition of the MGS pricing methodology. As such, the credit rating upgrade by Fitch Ratings on Spain to “A-“ from “BBB+” on 19 January 2018 was another important development for the MGS market which positively influenced MGS price movements.

At this stage it is difficult to say whether or not the current negative movements in international bond markets will have a spill-over effect on the demand for new MGS to be issued this year similar to the experience of last year. Investor sentiment surely does not seem to have improved following the recent movements in international bond markets and the subsequent decline in MGS prices. Moreover, volatility in bond yields (and prices) across the world is expected to remain high following the confirmation of improving economic fundamentals and the upward pressure on inflation expectations which is an important determinant for monetary policy decisions.

Ahead of the new MGS issuance in the weeks ahead, retail investors should seek advice to ensure that their portfolios are well-positioned to not only reflect their investment objectives but also the expected developments in the years ahead should yields continue to rise from their artificially low levels in recent years.