The ancient Greek philosopher Aristotle once said, “we make war that we may live in peace”. Human societies have waged war against each other for centuries upon centuries. To the victor the spoils as many-a-times conflicts shift the balance of power and delineate new paths for the victorious regimes.

Despite the obvious pain and suffering that wars cause at a human level, on the positive side and in many instances, over time they have eventually led to great leaps in technology as different cultures and nations are forced to innovate to survive.

None has been more obvious than the dawn of the nuclear age, which is largely responsible for the relative peace among major developed nations across the world for the most part of the past 8 decades. This technology was eventually adapted for various good uses, most notably in the generation of clean energy for the benefit of humankind. Indeed, it is this special human ability to learn and adapt that has been the cornerstone of our success as a species, and ultimately come out stronger than we were before as part of our evolution.

This period of volatility and eventual flourishing process can also be traced by observing the behaviour of financial markets throughout a war period. In this respect, the evidence suggests that despite an initial turbulent period, markets soon recovered largely shrugging off the events. For instance, during World War I, the Dow fell by more than 30% and markets were closed for 6 months. Once markets reopened, the Dow rose by more than 88% in 1915. Similarly, during World War II, from 1939 until the end of the war in 1945, the Dow surged by 50%, translating into an annual gain of more than 7%.

The pattern continues for all other major conflicts which took place after WWII. For example, during the peak of Cuban Missile Crisis, the Dow lost just 1.2% and gained 10% during the remainder of the year. Stocks indeed jumped 2.3% when the US invaded Iraq in 2003 and markets were up by 30% by the end of that year. Similarly, equity markets rallied past the wars in Korea, Vietnam, Afghanistan, ex-Yugoslavia, and Syria.

The message that history has taught us is that in times like these it is probably unwise to panic. In contrast, keeping a long-term perspective in mind is the most advisable strategy as once the dust eventually settles, markets have shown that they will continue to perform on their previous trajectory.

The ongoing invasion of Ukraine by Russia is a rapidly evolving and fluid situation that may be considered as a major war period as it led to a very strong reaction from a host of Western countries, creating a major direct confrontation between superpowers.

Indeed, markets have gone through the stages of a sell-off due to the uncertainty caused by the conflict, and thereafter settled and recouped some of their losses towards the end of last week. The warfare waged by the West has largely been based around strong economic sanctions against Russia for the time being.

In many respects, this war differs to previous wars as its effects are less immediate than lethal warfare on an international level. Indeed, the effects of economic sanctions are designed to slowly but surely limit Russia’s ability to wage and finance its war machine by cutting off crucial access to international trade and foreign reserves.

Despite Russia bearing the brunt of the economic sanctions, unfortunately the harsh sanctions cut both ways which is why markets have traded in a very volatile manner, particularly the financial services companies that have considerable exposure to Russian debt.

One must keep in mind that the world has become ever more connected and interdependent and the co-dependency even of world superpowers has become ever starker when compared to the other war periods.

It is important however to keep the scale of the conflict in perspective. Russia, despite its abundance of raw materials accounts for roughly only 0.3% of securities in MSCI’s global benchmark. Similarly, it represents only 3.2% of MSCI’s emerging markets benchmark. 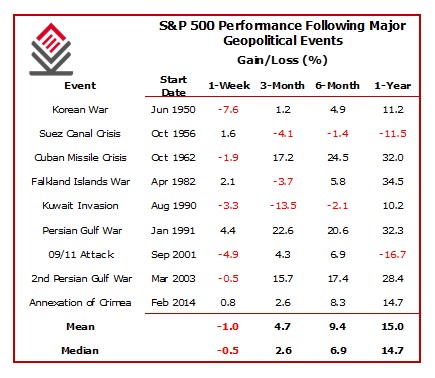 Political commentators, and probably Putin himself, have been surprised at how quickly and uniformly the vast majority of western nations have come together in contempt against the Russian invasion, and have acted strongly, including unprecedented measures that impact their own economies in defence of Ukraine’s sovereign rights. Even Switzerland has ditched its neutrality over the conflict.

There is never a good time for war among nations, however the current conflict is most unwelcome as global economies are still recovering from the pandemic induced disruptions. Indeed, financial markets have generally been under pressure since the start of the year due to the expected tighter monetary policy environment to tackle persistent levels of elevated inflation.

Highlighting fossil fuels, as prices soar due to the crisis, this has heightened the current inflation problem that world economies are currently facing. Similarly, Russia is also a major supplier of agricultural goods and other commodities which will only add to the prevailing pandemic-inflicted supply side chain disruptions that were expected to ease by the end of this year.

Inevitably, the war has implications on the decisions to be taken by major central banks as they try to control high inflation whilst at the same time maintain economic momentum and ensure price and financial stability. Indeed, the current war in Ukraine could even result in delays to forecasted interest rate hikes despite the challenges brought about by high inflation.

In times of crisis, it remains important to think logically about the implications that events surrounding the crisis may have on the world economies. War heightens the differences in performance among different sectors of the economy. Airlines and consumer discretionary tend to be laggards, while gold and energy sectors tend to outperform. At a country level, net importers of oil are likely to experience adverse effects from war.

Over the weekend, Germany announced that it will be dramatically increasing its budget on military spending in response to the Russian aggression. This resulted in a remarkable upswing of the share prices of the larger companies involved in the manufacturing of weapons. Every crisis creates an opportunity for those able to look through the noise.

Financial markets generally hate uncertainty but once a risk crystalises, markets normally get to grips with the real implications accordingly. During times like these, the importance of being positioned correctly, in the sectors that are set to benefit the most from the current economic dynamics is crucial. Meanwhile, other sectors that are not expected to be greatly affected by the conflict should continue to form part of long-term investment portfolios. Hopefully, as in other previous wars, the current conflict in Ukraine will be short-lived, and will have a limited impact on the long-term performance of the global economy.