The first half of the year is already behind us so it would be good to provide a summary of the performances across international equity markets before detailing the key themes that are likely to dominate investor sentiment across financial markets during the upcoming six months.

After under-performing during the first quarter of 2021, the main US indices outperformed the European markets during the last three months. While the S&P 500 for example rose by a ‘mere’ 5.4% between January and March 2021 compared to the 10.5% uplift in the Euro Stoxx 50, the leading US equity benchmark advanced by 8.6% in Q2 against the 3.5% gain for the Euro Stoxx 50. Interestingly, this brings both indices to an identical performance in the first half of 2021 at +14.4%. At this point, it is worth highlighting that in 2020, the US markets strongly outperformed those in the eurozone mainly as a result of the higher influence of technology stocks which was the sector that benefited the most from the social distancing measures and rigid restrictions as a result of COVID-19.

From a sectoral perspective, energy was by far the best performer across the US equity market during the first half of this year with a growth of over 42% amid a very strong recovery in the oil price which last week hit its highest level in 7 years. The financials sector was the second best-performing sector with an upsurge of 24.5% while utilities was the laggard with a minimal upward movement. In Europe, banks and the automobile sector ranked as the best performers with gains of over 23% followed by technology, construction and materials as well as retail with gains of circa 19% each. The utility sector was also the worst performer across the European equity markets.

As indicated in some of my recent articles, inflation remains a central theme and a likely key determinant of performances across various asset classes in the months ahead as inflationary pressures are becoming very evident in most developed economies. As the US consumer price index increased by 5% year-on-year during the month of May, some international financial columnists are recalling the damage to investment portfolios by the steep rise in inflation in the 1970’s as both bonds and shares suffered heavy losses. Some economists argue that the analogy with the 1970’s may not be optimal although in the current circumstances, central bankers can have a difficult decision in taming resurgent inflation since this can destabilise financial markets after a long period of ultra-loose monetary and fiscal policy measures.

Another factor that is among the key themes for the months ahead and which is very much linked to inflationary expectations is the level of interest rates set by the major central banks. Although at the start of the year, the Federal Reserve claimed that the present spike in inflation is merely a temporary phenomenon, the central bank has now begun to acknowledge that the tapering of the huge monetary stimulus measures introduced at the start of the pandemic in the first half of 2020 may need to take place. Moreover, participants within the Federal Open Market Committee are now expecting two interest rate hikes to take place during the course of 2023 unlike expectations only some months ago when no rate hikes were being anticipated.

In the eurozone, the situation may be somewhat different and in fact only last week the European Central Bank published its updated monetary policy strategy review in which the central bank set a new symmetric inflation target of 2% (inflation that is either below or above 2 per cent will be “equally undesirable”) compared to the previous aim of achieving inflation of “below but close to 2%”. Moreover, last week the ECB stated that it will tolerate a transitory period of “overshooting” inflation if a sustained period of near-zero interest rates threatens the central bank’s credibility in achieving price stability and avoid the risk of premature policy tightening. The ECB’s new strategy makes it more probable that it will keep rates lower for longer which is likely to keep eurozone bond yields low and provide support for European equity markets.

The financial performances of the larger companies across the US and European equity markets will naturally continue to remain important determinants of overall investor sentiment and performances of the main indices. International financial analysts have continued to revise higher their earnings estimates for the companies forming part of the S&P 500 not only for the second quarter of the year (the reporting season in the US commenced this week) but also for the full year. 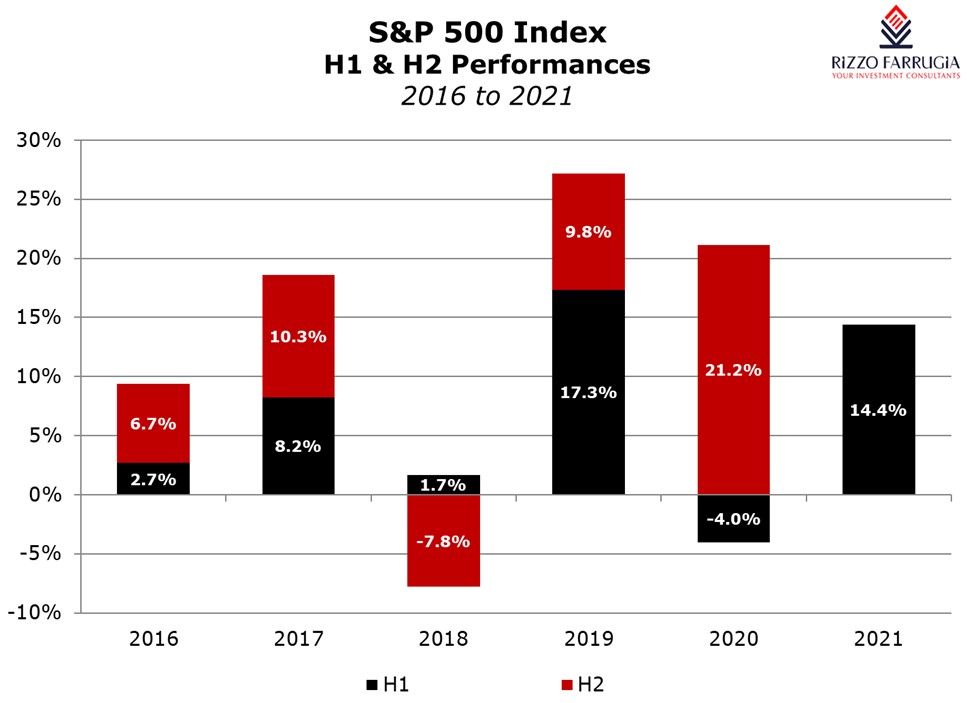 This increased optimism is due to (i) excessive caution exercised by the various analysts when setting out their initial earnings estimates; (ii) accelerating economic growth; and (iii) higher commodity prices. On their part, several companies within the S&P 500 have also become much more optimistic for the coming months and are increasing their profitability guidance for the full-year.

With respect to Malta’s economy and the capital market, the recent very disappointing news that the Financial Action Task Force placed Malta on its grey-list could lead to a period of prolonged subdued investor sentiment. This uncertainty could also have ripple effects on key sectors of the local economy such as commercial property and financial services. On the other hand, the recent statement by the international rating agency FitchRatings confirming that Malta’s credit rating will not be immediately impacted despite the additional risk of reputational damage as a result of the grey-listing could be somewhat comforting. Moreover, last week the European Commission issued its summer forecast for the eurozone members and Malta is expected to experience a growth of 5.6% in real GDP in 2021 following the considerable decline of 7.8% in 2020. The projected growth of the Maltese economy is now superior to the previous projection by the European Commission in May 2021 of 4.6% as a result of “the strong performance in the first quarter, which has a strong carry-over effect, and the positive picture painted by recent confidence indicators”. Conversely, Malta’s GDP growth forecast for 2022 has been revised lower from the previous forecast of +6.1% to a growth rate of +5.8%. Nonetheless this implies that Malta’s economy is expected to reach pre-pandemic levels of activity by mid-2022.

In the context of the overriding uncertainty following the grey-listing decision by the FATF, the interim reporting season in Malta which will start in the coming days should serve as an opportunity for the various companies to provide guidance to investors. Moreover, the financial results will reflect the extent of the recovery from the pandemic. These two factors could potentially have a large bearing on investor sentiment and individual share price performances in the months ahead.

Following the significant rally in international equity markets over the past 12 months, increased bouts of volatility are bound to materialise from one week to the next centred around the key themes highlighted above. In addition, other news flow related to the ongoing pandemic and the possible impact it may have on the expected economic recovery are also likely to influence market movements. The very low interest environment and the price risk inherent in long-term bonds as a result of inflationary pressures is among the main concerns that investors will have to deal with in the months ahead. Equities are generally a better hedge against contained inflation although those companies that are not profitable and only expected to become profitable in several years’ time may suffer as their valuation is hugely impacted by the interest rate environment. Meanwhile, equities of companies with low debt, sustainable earnings and pricing power whereby cost pressures can be passed on to consumers should provide superior returns over the medium term.