One of the most surprising developments across the financial markets in the immediate aftermath of the result of the US election was the sharp movement in the US Dollar.

In the early hours of Wednesday 9 November, as it became evident that Donald Trump was in the lead, the US Dollar weakened to $1.13 versus the euro.

However, within a very short time after Hilary Clinton conceded to the defeat, the US Dollar began to strengthen once again and ended the day at a level of $1.09.

In essence, the sudden movement in the foreign exchange market in November 2016 took place as the attention turned towards the main policies of the US President-elect. Donald Trump pledged to cut taxes and deliver a package of infrastructure spending thereby raising hopes of faster economic growth and potentially higher inflation.

In anticipation of higher levels of inflation and therefore a quicker path for interest rate hikes by the US Federal Reserve, the price of US government bonds declined and yields climbed. Meanwhile, although yields across the Eurozone also edged higher, the spread between German and US government bonds has widened to more than 2% – the largest spread since March 1989. As a result of the yield differential between US Treasuries and German Bunds, the euro has weakened suddenly against the US Dollar. In effect, investors seem to be switching out of the euro in favour of higher yielding currencies such as the USD and GBP.

Following this sudden turn of events, one of the most popular topics across the international financial media is whether the US Dollar could strengthen further and reach parity (1:1) against the euro within the next 12 months. Should this materialise, it would be the first time since 2002 and it would represent a significant change compared to the level of $1.6038 in July 2008.

Since the result of the US election, the market seems even more convinced that the Federal Reserve will hike interest rates in December and continue to tighten monetary policy during the course of 2017. Recent economic data further supports this stance with unemployment and inflation improving in line with expectations.

Another factor contributing to the weakness of the euro is the increasing political risk in Europe with a number of different political events starting off with the Italian Referendum next Sunday. Apart from the Italian Referendum, Austria may elect a new right-wing president also on 4 December. More importantly, the ECB is widely expected to maintain its current extremely loose policy stance well into 2017 by either expanding or also extending its QE programme beyond March 2017 at its next meeting on 8 December.

The increase in interest rates in the US on the one hand and an extension of the QE programme by the ECB as well as the heightened political uncertainty across Europe on the other, could easily lead to a continued widening yield spread between the Eurozone and the US resulting in further depreciation of the euro versus the US dollar.

One investment bank in particular believes that the euro will weaken towards parity in the run-up to the French presidential election in late April or early May next year. Another economist at a leading European bank also predicted a 12-month rate of $0.95 for the EUR/USD. Other factors that may currently be overlooked but which may dictate currency movements throughout the course of next year are the repatriation of sizeable US earnings by large US multinational companies as well as possible further bond-buying by the ECB well beyond the current extension likely to be announced on 8 December.

So, what are the implications if the euro continues to weaken against the US Dollar? Investors must take note of this sudden change in the exchange rate since it may have wide implications across various companies within their portfolios.

A stronger US Dollar makes US exports more expensive which may lead to a decline in revenue and profits across some of the large US exporters. Many of the US multinational companies generate sizeable profits from overseas so a stronger dollar is not generally a positive sign. 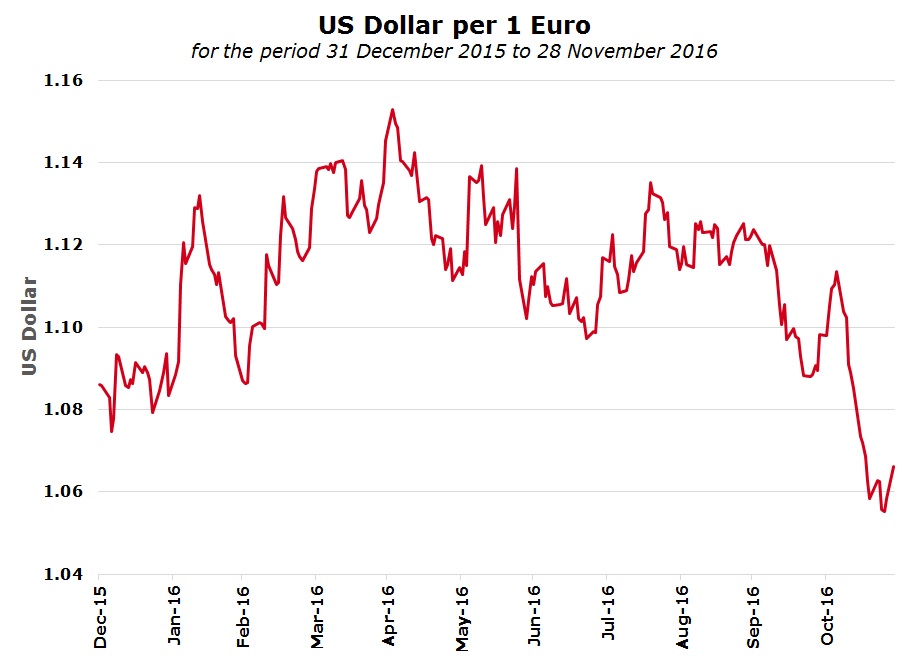 By way of example, Apple generates two-thirds of its sales outside the US and therefore a stronger US Dollar will impact the company’s profit margins. Similarly, companies such as Procter & Gamble, which manufactures consumer goods such as Pantene, Gillette and Oral-B, generates more than half its sales from outside the US and therefore this company will suffer from a strengthening US Dollar. Likewise, clothing companies such as Puma, Nike and Adidas are also negatively impacted since their contracts with Asian suppliers are all denominated in US Dollars.

Meanwhile, European companies that export to the US will find the recent currency movements to be beneficial since sales generated in the US will translate into higher revenues denominated in euros. The share prices of some of the larger European car companies such as BMW and Daimler have in fact improved in recent weeks following the weakness in the euro against the US Dollar.

Investors who do not have any exposure to companies listed on international stock exchanges and who invest solely on the Malta Stock Exchange have a limited impact to such currency movements. FIMBank plc, which reports in USD but incurs significant costs in EUR due to its head office based in Malta, is indeed a beneficiary of recent currency movements. Likewise, Medserv plc also benefits from a strengthening US Dollar against the euro following the purchase of METS earlier this year. The reporting currency of METS is in US Dollars and this subsidiary is a major contributor to overall Group revenues. Another company that is likely to be marginally positively impacted is RS2 Software plc which generates a portion of its revenue in US Dollars.

Although many financial journalists are mentioning the euro/dollar parity as being one of the key themes for 2017, some economists argue that since the markets are generally forward-looking, the evident divergence in monetary policy stances in the Eurozone and US may indeed already be factored in. Should this be the case, a partial reversal of the recent upward trend in the US Dollar may materialise.

These economists claim that if Donald Trump’s declared policies turn out to be milder after he assumes the Presidency on 20 January 2017, then investors should expect a readjustment across financial markets with the yield between the German bund and the US Treasury likely to narrow again leading to a weaker US Dollar and a stronger Euro.

Furthermore, some financial commentators believe that the ECB cannot maintain its QE programme at current levels indefinitely although core inflation in the euro zone is continuing to disappoint central bankers. During the course of next year, the ECB may be compelled to reduce the volume of QE purchases. Such a decision should support the euro going forward.

Currency movements are more often than not extremely hard to predict as was evident over the past 12 months. In fact, one of the main themes at the end of last year was that the euro will reach parity against the dollar during the course of 2016. This did not materialise as the Federal Reserve was not as aggressive in raising interest rate as initially expected.

Various factors affect currency movements. However, the political developments across Europe in the near-term as well as in 2017 are likely to largely shape foreign exchange movements in the months ahead. Investors therefore need to be continuously on the look-out for any developments likely to affect the value of currencies and as a result also the value of their investment portfolios.