Announcements and policy decisions by the major central banks are among the most influential factors affecting financial markets.

Last week’s article dealt with the recent decision by the European Central Bank to extend its Quantitative Easing programme. In the article, I also documented the intense volatility that characterized financial markets following this announcement.

Meanwhile, last Wednesday, the US Federal Reserve raised interest rates for only the second time in a decade.

While last week’s decision (of a further 25 basis point increase) had been widely expected by several international economists, only few expected the Federal Reserve to indicate that it will step up the pace of interest rates hikes so aggressively during the course of 2017 if the economic outlook evolves as anticipated. On average, the policymakers at the Federal Reserve now expect three increases of 25 basis points each next year from the earlier indication in September of two rate rises in 2017. Should these three rate hikes materialize, the base rate will increase to around 1.4% by the end of 2017.

The Chairman of the Federal Reserve Ms Janet Yellen described the expectations of higher interest rates next year as a “vote of confidence in the economy” as economic activity was expanding at a moderate pace, the rate of unemployment declined and inflation expectations had increased considerably. GDP growth in the US is now expected at 2.1% in 2017 (up from the previous forecast of 2%) and 2% in 2018 (unchanged from previous forecast) while unemployment, which fell to a 9-year low of 4.6% in October 2016, is now predicted to drop to 4.5% in 2017 and maintain this level in the years ahead.

Ms Yellen explained that expectations of fiscal stimulus following Donald Trump’s victory in the US Presidential election had been one of several factors that influenced changes to interest rate hike projections.

Naturally, an increase in interest rates in the world’s largest economy and expectations of stronger rate hikes in 2017 has wide ranging implications across global financial markets. Following last week’s announcement, bond prices declined in the US and also in other parts of the world in anticipation of the continued increase in US interest rates in 2017 which could also trigger higher inflationary expectations in other regions. By way of example, the yield on the 2-year US Treasury jumped to 1.3 per cent – the highest level since 2009. Likewise, the 10-year US Treasury yield rose above 2.6% last week – the highest since September 2014. The downward pressure on US sovereign bond prices was also felt across the Eurozone with the yield on the benchmark German 10-year bund rallying to 0.394% on Thursday morning before easing back in the following days probably as a result of the re-emergence of the issues related to the Greek bailout and the Italian banking sector as well as the economic challenges still prevailing across the Eurozone countries.

Equity markets in the US initially declined following last Wednesday’s interest rate decision but the strong upward trend experienced since the election of Donald Trump resumed by the end of the week. The share prices of financial companies were among the most positive performers once again in view of the beneficial impact of higher interest rates on profitability as their lending margins are boosted.

Meanwhile, the US Dollar strengthened against the euro to USD1.038 – its highest level in 14 years. Currency markets were extremely volatile again this year and although the US Dollar has appreciated by 4.4% against the euro so far in 2016, it had weakened to USD1.1614 in the first half of 2016 as the challenging economic conditions in several parts of the world had led the Federal Reserve to abandon its monetary tightening programme.

As indicated in some of my articles in recent weeks, a very influential theme shaping the currency markets is the monetary policy divergence between the Eurozone and the US. In fact, while policymakers in the Eurozone decided to extend the quantitative easing programme until December 2017, the Federal Reserve is on an evident course of monetary policy tightening. The future direction of the EUR vs USD exchange rate will continue to be very much influenced by interest rate expectations in the US and decisions on the bond purchasing programme at the ECB. 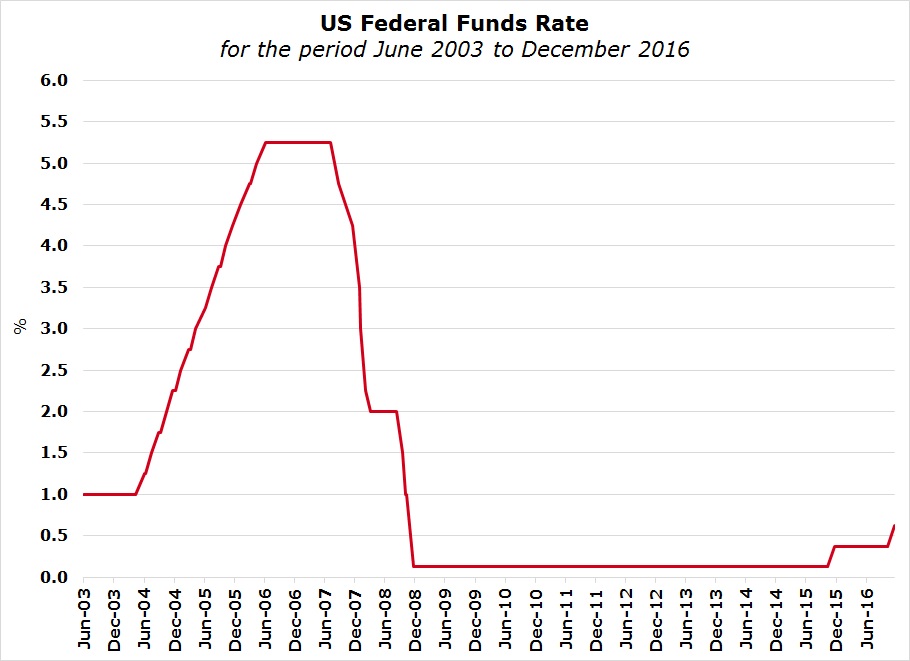 Every quarter, the members of the Federal Open Market Committee anonymously provide their interest rate predictions for the end of the year and also in the longer term. The Federal Reserve publishes these predictions in a chart where every dot represents a member’s vote. This is very often referred to as the Fed’s ‘dot plot’ and is a widely followed metric within financial circles.

However, in recent years, financial markets have been skeptical of the trajectory for interest rates that the Federal Reserve portrays in its quarterly ‘dot plots’.

In December 2015, for example, the central bank initially forecasted four interest rate rises for 2016 but only one materialized (the 25 basis point hike announced last week). Following the expectation of four rate hikes by the Federal Reserve, many analysts were predicting last year that the US Dollar could strengthen significantly and reach parity (1:1) against the euro within the following 12 months. However, this failed to materialize and the US Dollar had actually weakened during the first few months of 2016. The reasons for the delay in interest rate rises during 2016 were due to the very challenging global economic and financial developments starting off with the fears over the Chinese economic downturn in the first part of the year followed by the uncertainty as a result of the Brexit referendum in June. Another event that must have led to caution among policymakers was the US presidential election in November.

In view of the weak track record this year, many financial commentators and economists are increasingly skeptical whether the policymakers at the Federal Reserve will indeed pursue three rate hikes in 2017.

In fact, the Financial Times reported over the weekend that according to a survey of top economists, the Federal Reserve will wait six months before raising interest rates again as they believe that US policymakers will maintain a cautious approach to tightening monetary policy until they see the economic package that will be implemented by Donald Trump after he takes office on 20 January. The survey conducted by the Financial Times also indicated that the overall view among the economists that participated in this survey are that the Federal Reserve will implement just two rate hikes in 2017 as opposed to the three hikes indicated last week.

Other analysts also argued that such a faster rate of interest rate hikes is unlikely since the Fed only upgraded its economic growth projections modestly for next year while inflation forecasts were unchanged between 2017 and 2019.

In essence, the policies to be implemented by the US President-elect and how they match with general expectations will play a pivotal role in global financial market developments next year.

In turn, this will also influence interest rate decisions by the other major central banks during 2017. As such, the regular monetary policy meetings conducted by the Bank of England, the European Central Bank and the Federal Reserve will continue to be very important events for investors to follow in detail during the course of next year due to the impact on movements across all asset classes.