2016 was a milestone year for GO plc following the change in its majority shareholder (Tunisie Telecom acquired a 65.4% stake) and the acquisitions of a 51% shareholding in both Cablenet Communications System Limited (Cablenet) and Kinetix IT Solutions Limited (Kinetix).

The 2016 financial statements published on 21 February 2017 are also the first set of annual financial results following the spin-off of Malta Properties Company plc – GO’s previous property holding company – into a separate company listed on the Malta Stock Exchange in November 2015.

As such, GO’s 2016 financial results are not comparable with those of the previous year as the financial statements for the year ended 31 December 2016 include the consolidated results of Cablenet and Kinetix for the first time as well as the leases payable to Malta Properties.

In fact, some of the key headline figures may be misleading to many investors.

The GO Group reported a €33.3 million increase (+26.9%) in overall revenues to almost €157 million while cost of sales and administrative expenses grew by €23.3 million to €95.3 million. On the other hand, profits after tax, which declined by 30.2% to €18.4 million, may have confused some shareholders. The profit after tax must also be analysed in the context of the consolidation of the two new companies forming part of the Group, namely Cablenet and Kinetix. In fact, following this important development, depreciation and amortisation charges surged by €11.6 million to €35.4 million. Other factors that impacted the overall profitability in 2016 were the increase in finance costs (also as a result of consolidation) as well as the €1.5 million write-off on the investment in the Greek telecoms company Forthnet.

A more meaningful figure used across the telecoms industry is the earnings before interest, tax, depreciation and amortisation (EBITDA). During 2016, the GO Group’s EBITDA increased by 19.4% to €61.6 million. This was naturally also impacted materially by the consolidation of the two new companies forming part of the Group. In fact, GO reported that Cablenet’s share of the increase in overall Group revenue amounts to €29.1 million and as such, the Cypriot subsidiary is now accounting for 18.5% of Group revenues and possibly circa 18% of overall EBITDA. Another important revelation is that Cablenet registered an increase of 11.9% in revenue. On the other hand, although revenues generated by GO from its local operations still registered growth as they increased by 3.4% to a five-year high of €127.9 million, the extent of the more meaningful growth in revenue from the Cypriot subsidiary depicts the importance of the investment in Cablenet for the overall GO Group going forward.

Cablenet, which commenced operations in 2003, is a triple-play telecommunications operator in Cyprus providing pay-TV, internet and fixed-line telephony services. GO initially acquired a 25% stake in September 2014 and at the time it had also extended Cablenet a loan of €12 million which was convertible into equity. Moreover, GO had also obtained an option to acquire majority control of the company.

In total, GO invested €15 million for its 51% stake in Cablenet. The investment had a carrying value of €28 million in GO’s financial statements as at 31 December 2016, reflecting the original investment as well as the positive fair value adjustments registered in 2015 (€6.95 million) and 2016 (€6.08 million) in line with the growth and improved profitability of the Cypriot subsidiary. 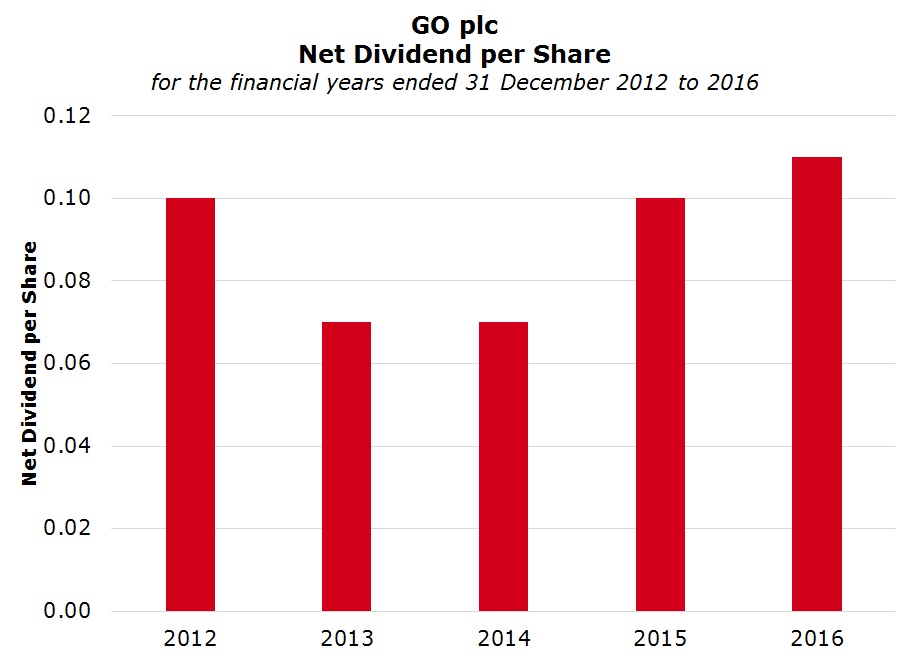 In various statements made to the press since GO had executed its initial minority acquisition of Cablenet in September 2014 and obtained majority control in January 2016, GO’s CEO at that time had commented that the investment in Cablenet forms part of the overall Group strategy of seeking growth opportunities outside Malta given the limited opportunities for incremental business within the local telecommunications market. GO’s Chairman at the time had stated that although the Group still firmly believes in the Maltese market, GO also has a broader, regional vision and Cyprus fits in well with this overall strategy. The Chairman had added that since the acquisition of a minority stake in Cablenet in 2014, the Cypriot company performed strongly, delivering double-digit growth in both revenue and EBITDA since then.

Additionally, in an interview published in the media on 7 May 2015, GO’s CEO had also stated that “Eventually it [Cablenet] could surpass GO”. Although Cablenet is still a relatively small business (with 145,000 customer connections compared to GO at over 500,000), it is reportedly registering strong progress in a market which is still largely dominated by the incumbent operator. Given the fact that Cyprus is double the size of Malta, Cablenet possibly has the potential of surpassing GO should it continue to expand its network which currently only covers approximately 45% of households in Cyprus.

While the potential for further growth via Cyprus could be an exciting prospect for the numerous GO shareholders who retained their investment in GO plc despite receiving a voluntary takeover bid in mid-2016 at a price of €2.87 per share, the current strong cash generation capabilities of the Group was again very evident during 2016. In fact, cash generated from operations amounted to €63.8 million, an increase of €27 million over 2015, as a result of improved cash from the Malta operations as well as the consolidation of Cablenet. The strong cash generation as well as the robust financial position enabled GO’s Directors to recommended the payment of a net dividend of €0.11 per share which is 10% higher than the dividend paid in the previous year. The dividend payout ratio is just over 60% and translates into a net yield of 3.12% based on the current share price of €3.50. Although we are still in the midst of the annual financial reporting season, GO’s equity currently ranks as the third highest dividend yielder among all the companies listed on the Malta Stock Exchange.

The strong recovery in the share price over recent months together with the attractive yield vindicates the decision by the numerous investors who maintained their shareholding in GO plc despite the uncertainty arising from the voluntary bid last year.

Another interesting development for GO is the recent announcement related to the appointment of a new CEO following the resignation of Mr Yiannos Michaelides who was instrumental in devising an excellent strategy for the Group to ensure that it maintains its strong position in the local telecoms market. The new CEO Mr Attila Keszeg is a very experienced person having previously held appointments with Deutsche Telekom AG and Magyar Telekom plc.

The new CEO’s international experience augurs well for GO and should help to ensure that, on the one hand, Cablenet maintains its strong expansion plans and on the other hand, that GO maintains its position as the leading telecom provider in Malta especially following revelations in the media earlier this week of the possible acquisition of Vodafone Malta by Melita Limited.

Mr Keszeg’s experience could also be important for GO in seeking opportunities to grab additional market share in the highly competitive and saturated local telecoms market. The latest statistics published by the Malta Communications Authority indicate that by Q3 2016, GO increased the number of subscribers in mobile telephony, fixed broadband and also pay-TV and it also managed to defend or gain market share in each of these market segments.

While GO managed to maintain a leading position in telecoms, following the 51% acquisition of Kinetix it is evident that the overall strategy also encompasses turning the Group into an important player in the large ICT sector. GO is still a very small player in this segment and this could therefore be another key growth area in the future. The acquisitions conducted in 2016 have resulted in GO becoming a much larger and a more diversified telecoms and ICT Group which should lead to added shareholder value in the years ahead.