The 2016 results are reflective of the volatile industry in which Medserv operates as various industry-wide factors adversely impacted the Group’s performance. Moreover, for the first time, the 2016 financial statements also included the contribution from the METS Group following the acquisition of the Middle Eastern Group of Companies in February 2016.

During the 2016 financial year, Medserv reported its largest pre-tax loss since listing its shares on the Malta Stock Exchange back in October 2006. In fact, Medserv incurred a pre-tax loss of €2.45 million in contrast with the pre-tax profit of €5.8 million in 2015. The loss was largely due to changing dynamics within the oil and gas industry including the significant downturn in the price of oil. The latter development led oil companies to cut operational costs which in turn resulted in lower profit margins for companies such as Medserv.

Furthermore, the Group’s performance was also impacted by a slowdown in activity in Iraq and Libya given the geopolitical issues in the respective countries as well as delays in other projects including the 1-well exploratory project in Portugal which was postponed due to regulatory and environmental issues. As a result of the above, the Group’s earnings before interest, tax, depreciation and amortisation (EBITDA) almost halved to €5.53 million.

Additionally, the Group’s profitability was also dampened by the non-cash amortisation charges amounting to €2.05 million related to the consolidation of the METS acquisition into the Medserv Group. Such charges are expected to recur on an annual basis for a number of years going forward.

The aforementioned loss was not anticipated by management. As a result, the 2016 actual results vary significantly from the Group’s forecasts published in the Financial Analysis Summary dated 18 May 2016. Most notably, Medserv reported a 52% variance in EBITDA with an actual EBITDA figure of €5.5 million compared to a forecasted figure of €11.5 million. The actual pre-tax loss for 2016 of €2.45 million also contrasts with the projected pre-tax profit of €4.45 million. The deviations largely stem from the unexpected losses in METS Iraq, the slowdown experienced by the Malta base and the delays in the Portugal operation.

Despite the losses incurred during 2016, it is important to highlight that the acquisition of the METS Group is a source of significant growth potential going forward and still an important element in the Group’s strategy of diversifying its geographical presence, its portfolio of services as well as its client base. During a recent meeting with the financial community shortly after the issuance of the various announcements, the Chairman of the Medserv Group Mr Anthony Diacono noted that the diversification achieved in recent years is fundamental for the sustainability of the Medserv Group’s business model in the evolving oil and gas industry.

Furthermore, it is also noteworthy to highlight that whilst Medserv did not lose any of its contracted business during 2016, it was merely delayed to future years. In fact, the Chairman highlighted that the Group also managed to secure all business opportunities that arose during the year for its base in Malta highlighting the importance of the location of this base in the centre of the Mediterranean and the Group’s growing reputation for quality service.

Nonetheless, 2017 is still expected to be a challenging year for the Medserv Group. In fact, the Directors are projecting a pre-tax loss of €1.42 million for the current financial year. The improvement compared to the €2.45 million pre-tax loss incurred in 2016 is as a result of the expected upturn in EBITDA by 36.6% to €7.55 million as a number of delayed projects are expected to commence in the second half of 2017.

Medserv is anticipated to start servicing the 1-well exploratory operation in Portugal in September 2017. Additionally, the Group’s base in Cyprus, which has been mothballed for over a year, is expected to restart operations in December 2017 with the provision of support services from Limassol to a rig involved in a 3-well exploratory programme. Medserv is also awaiting  the delivery of relevant equipment to be utilised in the Bahr Essalam phase 2 project offshore Libya which should be delivered to the Malta base towards the end of the second quarter of 2017. This should lead to a rebound in the activity levels in Malta in support of operations offshore Libya. 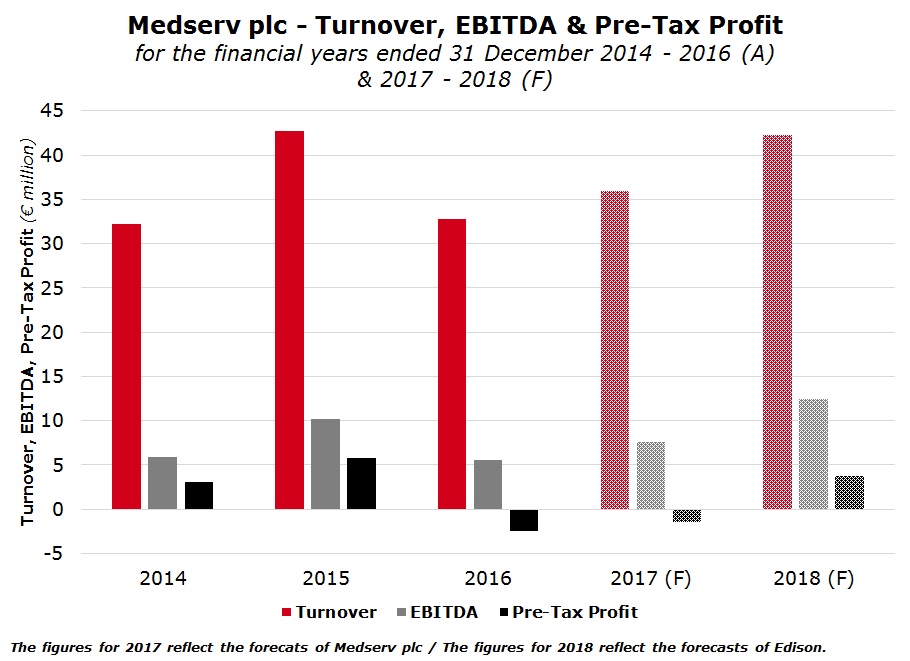 Towards the latter part of 2017, Medserv should also see the completion of the Group’s new larger base in Duqm, Oman (measuring 117,000 square metres) which will enable the Group to start servicing Sumitomo in terms of its recently awarded contract – the largest ever for the Medserv Group. In the meantime, METS UAE is anticipated to carry out an increased level of threading works in 2017 compared to 2016.

In 2018, the contracted projects of the Medserv Group should gather further momentum. In fact, EDISON are forecasting a significant improvement in EBITDA to €12.4 million in 2018. Nonetheless, given the slowdown in 2016 and the envisaged slow recovery in 2017, EDISON have reduced their valuation for Medserv to €1.83 from €2.03 per share.

Apart from the contracted works due to commence shortly, Medserv is seeking a number of other high value, higher margin, and longer duration projects in various parts of the world. None of these potential projects have been accounted for in the 2017 forecasts presented in the Financial Analysis Summary dated 5 April 2017.

In this respect, through its various subsidiaries, Medserv is participating in another tender in Trinidad & Tobago (after failing to secure the first tender) and will be participating in other tenders in the Caribbean region as they are issued during the course of 2017.

Medserv is also seeking work in Egypt. After having established its presence in this North African country, the Medserv Group has been accepted on the vendor list of two International Oil Companies (IOCs). This will enable the Medserv Group to participate in a number of upcoming tenders for the provision of shore-base logistic support services to offshore operations in Egypt including those related to the Zohr field - an offshore natural gas field containing the largest ever gas find in the Mediterranean Sea by the Italian IOC ENI.

In the meantime, the Medserv Group is also exploring the possibility of entering the Iranian market. However, further progress in this respect is still subject to additional due diligence in view of the sanctions imposed by the US on Iran which are still in force.

In view of the pre-tax loss incurred in 2016 and the loss also being anticipated for 2017, the Board of Directors have resolved not to distribute a dividend with respect to the 2016 financial year. However, it is important to note that despite the pre-tax loss, the cash position of the Medserv Group actually improved in 2016 to €6.2 million (2015: €1 million) which is projected to continue growing to reach €9.8 million in 2017 in line with the expected pick-up in activity during the second half of the year as explained above. This should be encouraging for shareholders since it enhances the possibility of dividend payments in future years. Nonetheless, EDISON are also not expecting a dividend payment in respect of the 2017 financial year.

Although Medserv’s pre-tax losses and the missed dividend payment is disappointing news for shareholders, the Group has a robust business pipeline with added prospects in other regions. However, the possibility of further volatility in the Group’s performance in future years should not be overlooked in view of the fluid nature of the oil and gas industry which, as had been very evident in recent months, can be heavily influenced by the price of oil, geopolitical developments as well as environmental and regulatory issues.