Two weeks ago marked the end of the third quarter of the year. The main highlight of Q3 is generally the interim reporting season which lasts until 31 August. However, the summer months are also generally characterized by weaker activity across the market.

Apart from the wide discrepancies in trading activity across the equity and sovereign bond markets, the main highlight during summer 2016 was the outperformance of Malta Government Stocks. The Rizzo Farrugia MGS Index advanced by 1.55% during the past three months while the MSE Share Index shed 2.1%.

Q3 2016 can best be remembered for the bond market rally. Prices of all medium and long-term Malta Government Stocks surged during the past three months and most of these securities traded up to new record levels on a regular basis.

The Malta Government Stock market mirrors developments across the Eurozone and in particular the peripheral European countries with credit ratings similar to Malta’s. It was no different over the past three months as yields across the globe dropped significantly and as a result bond prices increased sharply. 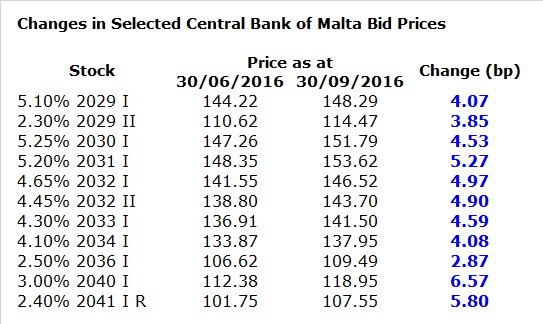 In the immediate aftermath of the result of the Brexit referendum held on 23 June, UK yields dropped heavily as the market anticipated a new package of monetary stimulus by the Bank of England to combat the potential weakening of the British economy as a result of the uncertainty arising from the decision to exit the EU. This also had a spill-over effect across global bond markets.

The 10-year benchmark German Bund dropped to an all-time low of -0.204% on 6 July  and has remained particularly volatile since then. Across the periphery countries, the 10-year yields of both Italy and Spain also dropped to fresh all-time lows in recent months. The Italian 10-year bond declined to 1.035% in mid-August compared to 1.368% before the Brexit referendum. Likewise, the Spanish 10-year yield dropped to a new low of 0.874% on 28 September compared to 1.540% in early June and 1.781% at the start of 2016. The 10-year Spanish yield has since touched a fresh record low of 0.865% on 3 October.

As indicated above, following the steep decline in international yields, the medium and long-term MGS’s performed very positively and traded up to new record levels on various occasions thereby surpassing the previous highs registered during the first half of 2015 shortly after the start of the quantitiative easing programme by the European Central Bank.

The table shows the changes in the indicative bid prices quoted by the Central Bank of Malta between 30 June and 30 September for those securities which mature from 2029 onwards. All MGS’s registered strong upward movements in prices over the past three months with gains ranging from a low of 287 basis points in the 2.5% MGS 2036 to a high of 657 basis points in the 3% MGS 2040. Incidentally, all prices peaked on 28 September and partially declined by the end of the month. 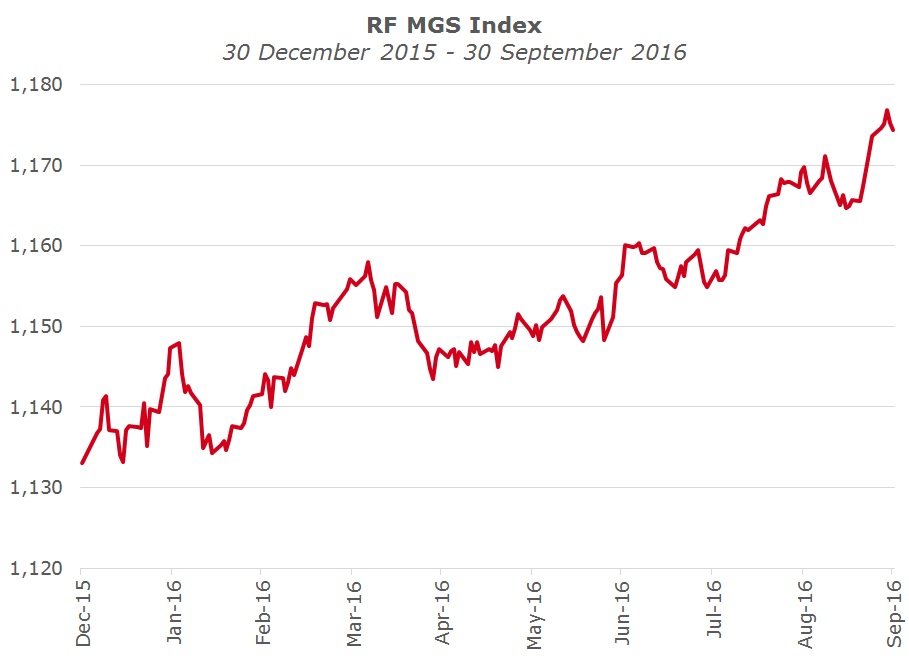 The most actively traded MGS over the past three months was the newly issued 2.4% MGS 2041. This security was first issued on the primary market during the first week of August. Retail investors once again crowded-out institutional investors and as a result, the auction process could not be held. Although trading on the secondary market in this security only commenced on 23 August 2016, during the five-week period until the end of September, the 2.4% MGS 2041 accounted for over 34% of all activity in the MGS market during Q3. A total of €54.7 million of the 2.4% MGS 2041 changed hands in this five-week period, representing 36% of the total amount in issue in this stock. In September alone, activity in the 2.4% MGS 2041 accounted for 73% of overall activity across Malta Government Stocks on the MSE.

Meanwhile, in the equity market, four equities registered double-digit losses during Q3, namely RS2 Software plc (-21.9%), 6pm Holdings plc (-15.8%), Medserv plc (-13.4%) and Mapfre Middlesea plc (-12.5%). In EUR terms, the losses in 6pm increase to -19.2%, as a result of the continued decline in Sterling verses the euro. My article of 22 September provided some background to recent developments in Medserv and RS2. Investors are now eagerly awaiting specific announcements from both companies on new client additions and the results of important international tenders.

Apart from these companies, another major contributor to the decline in the MSE Share Index in Q3 was the 9.3% drop in the share price of International Hotel Investments plc. Despite a slight improvement in EBITDA in the first half of 2016 (which excludes the contribution from the London hotel and the Golden Sands in Malta), the equity of IHI has continued to remain suppressed as investors possibly await stronger returns on the overall property portfolio which could then fund cash dividends on a regular basis.

The two top gainers during the third quarter of the year were GO plc (+12.6%) and Simonds Farsons Cisk plc (+12.3%). In my article on 22 September I had mentioned that the publication of the interim financial statements of GO plc in early August which included the consolidated figures of Cablenet in Cyprus following the increase in GO’s shareholding to a majority stake as from 1 January 2016, helped improve investor sentiment towards the company. The equity recovered by 12.6% in Q3 to €3.22 thereby partially recouping from the setback in the share price following the revelation of the voluntary bid by Tunisie Telecom on 23 May at €2.87, which represented a significant discount to the prevailing market price at the time of €3.45.

Towards the end of September, the share price of Farsons traded up to the €7.00 level for the first time in its history in anticipation of the publication of the Group’s July 2016 interim financial statements which were released on 28 September. Following the revelation of another record financial performance with pre-tax profits rising by a further 20% to €5.8 million, the equity also surpassed the €7.00 level by the end of the month and touched yet another new all-time high of €7.30 on 3 October.

The major developments taking place during the fourth quarter of the year are the new MGS issue in the coming days and the €65 million bond issue by Premier Capital plc. This is the largest ever non-bank corporate bond issue. As is customary, another important event is the publication of the annual financial statements of Bank of Valletta plc by the end of October. Moreover, by mid-November, a number of companies are also expected to provide updates to the market on their financial performance in Q3 and their expectations for the last three months of the year. Such announcements will help bridge the lengthy period between the publication of the interim financial statements by end of August and the full-year financials by April 2017. These company updates are important tools for companies to maintain a healthy flow of information to the investing community.

Meanwhile, the 2017 Budget Speech being presented by the Minister of Finance next Monday could also be an important development for the market should the Government announce any initiatives related to the Malta Stock Exchange. The capital markets (both bond and equity) need to expand further, not only in the traditional sectors but also in the new sectors of our changing economy.