Just over three months ago I wrote an article titled “The MGS market after Trump” wherein I gave a detailed description of the sudden drop in the prices of Malta Government Stocks (MGS) in the immediate aftermath of the result of the US election on 9 November.

I had also published a table showing the decline in MGS prices from their all-time highs reached between the end of October and early November 2016 and the prices at the time of publication on 22 November 2016. The table depicted a decline of between 471 basis points and 941 basis points within the space of just over 3 weeks for MGS’s maturing in 2028 onwards.

Since then, although yields across the Eurozone (and hence prices across sovereign bond markets including MGS) remained particularly volatile from one week to the next, the overall downward trend across the bond market persisted. In fact, the Rizzo Farrugia MGS Index edged up by 0.45% in December 2016 but then slumped by 2.91% in January 2017. Eurozone yields eased lower during the month of February and as a result, the RF MGS Index partially recovered from the steep losses in January as it rose by 1.07%.

The extent of the decline in the MGS market may be depicted by the fact that in less than five months, all MGS prices with maturities of nine years and over, are now more than 10 percentage points below their respective prices on 24 October 2016 – the day when the RF MGS Index reached an all-time high of 1,182.272 points.

So what is the main cause behind this renewed sell-off last week?

The main reason for the decline in MGS prices was the market reaction to the European Central Bank’s (ECB) Governing Council meeting held last Thursday during which the ECB left interest rates on hold at record lows but increased its growth and inflation forecasts for this year and next. The ECB is now expecting GDP growth of 1.8% this year and 1.7% in 2018 from the previous forecast of +1.7% and +1.6% respectively. Likewise, the ECB sounded more upbeat in its inflationary forecasts as it is now anticipating an inflation rate of +1.7% this year and +1.6% in 2018 compared to last December’s forecasts of +1.3% and +1.5% respectively.

During the customary press conference following the conclusion of the ECB Governing Council meeting, President Mario Draghi said the ECB no longer had a “sense of urgency” to take further action on monetary stimulus. Mr Draghi also removed a key sentence from the customary ECB statement, that “The ECB will use all instruments available to bring back inflation”. He also stated that policymakers “do not anticipate that it will be necessary to lower rates further”.

The ECB effetively sent a positive message to the market about the results of the monetary policy programme as eurozone inflation rose above its target of just under 2 per cent for the first time in four years. Mr Draghi basically declared victory over the deflation risks that had prompted the ECB to commence its bond-buying programme in the first quarter of 2015 in order to drive down borrowing costs across the eurozone as a way of stimulating the economy.

The subtle shift in the message from the President of the European Central Bank led to a rally in Germany’s 10-year bond yield on Thursday afternoon to 0.43 per cent from just 0.18 per cent 10 days earlier. 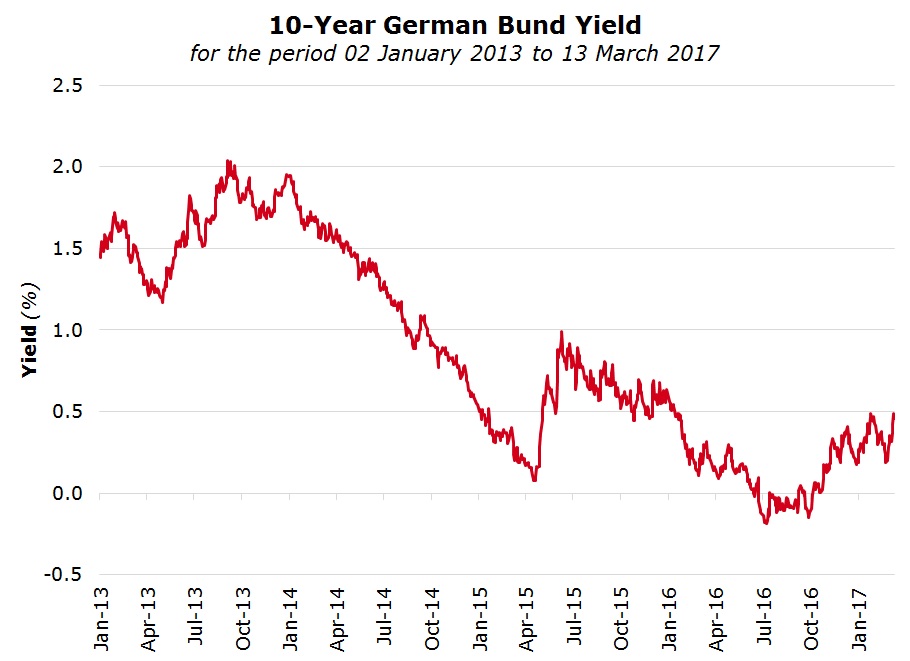 German bund yields continued to rally the following day in the aftermath of the ECB press conference and also after a report published on Bloomberg indicated that the European Central Bank had discussed whether rates could rise before it completed its bond buying programme scheduled for December 2017. Currently, banks are being charged 0.4 per cent on a portion of reserves parked at central banks across the eurozone. An easing of this negative rate would be positive for the banking sector as the negative deposit rate is squeezing profit margins since banks cannot pass this cost back to their customers.

The report from Bloomberg also said that members of the ECB’s Governing Council had discussed ways how to normalise monetary policy measures and an effective manner of how this plan should be communicated to the market.

Should the ECB truly raise rates before the end of the QE programme, it would mark a departure from the guidance on timing of rate hikes that the President of the ECB has given since March 2016, when he lowered the deposit rate to minus 0.4 percent. The President of the ECB had repeatedly claimed that “The Governing Council expects the key ECB interest rates to remain at present or lower levels for an extended period of time, and well past the horizon of our net asset purchases.”

This method would also differ from that adopted by the US Federal Reserve which ended its QE programme in October 2014 and raised interest rates for the first time in December 2015.

Although during last week’s press conference the ECB President played down the prospects of a rate hike before the end of its QE programme, he noted that the “probability of a rate cut has gone down”.

Some international economists are now anticipating that the ECB will lift the eurozone deposit rate by 25 basis points from a record low of minus 0.4 per cent as early as September 2017 and continue winding down its bond buying programme in early 2018.

In the coming months, should economic data continue to confirm the renewed positive momentum across the eurozone region and the ECB truly moves towards such tightening policies, yields are widely anticipated to continue to edge higher towards more normalised levels.

It is worth highlighting that prior to the start of the QE programme in early 2015, the eurozone 10-year benchmark bond yield stood well above 1% during the first half of 2014 and only dropped below 0.5% at the start of 2015 once the ECB formally announced a commencement date for QE purchases. Should yields edge up past the 1% level once again, sovereign bond prices across the Eurozone will continue to decline and MGS prices will follow such a trend.

As such, retail investors who may have purchased MGS’s mainly for speculative purposes and have not yet been able to exit their positions should take note of such a possibility. Bond yields and MGS prices will undoubtedly remain very volatile from one day to the next mainly influenced by economic data, statements by officials of the ECB, political developments and other factors. Investors would do well to understand the current climate and the implications should conditions across the Eurozone continue to improve.