Last Wednesday, the British government handed in the formal notification of its intention to exit the EU, marking the first-ever withdrawal of a member state in the EU bloc’s 60-year history.

Both the British government and the European Commission confirmed that the act is irrevocable, meaning that by April 2019 the UK will be out of the EU.

The two sides now face two hectic years of negotiations to agree the terms under which the UK will be leaving the EU while also determining the nature of the UK’s relationship with the 27 member states. In view of the ensuing uncertainty as to what kind of Brexit deal will be concluded (assuming an agreement will be reached), it is fair to expect conflicting views on the immediate and the longer-term outlook for the Pound Sterling.

Undoubtedly, the long-term outlook for sterling will be determined by the final Brexit deal and other trade deals that the UK may forge with other countries such as the US and China. However, shorter-term movements in the currency ahead of the April 2019 deadline will be largely dictated by the various possibilities of the Brexit deal as fresh political developments emerge.

In fact, in a talk delivered last week in Malta, Mr David Bloom, who is a senior strategist at HSBC Bank plc, explained that in foreign exchange markets, politics is the new economics.

British Prime Minister Theresa May has stated that she aims to leave the single market and clamp down on immigration. She also insisted that she wants a “bold and ambitious” trade relationship with the EU but also the freedom to negotiate trade agreements with other countries.

The response of the EU negotiating team to the UK’s trigger of Article 50 should become clear by the end of this month and the stand being taken by the EU will be critical in setting the tone for exit negotiations and subsequent trade deals between the two sides.

As a start, it is worth recalling that in the aftermath of the Brexit vote in June 2016, sterling dropped by over 14% to a 31-year low against the US Dollar and also suffered a double-digit decline against the euro to the lowest level since 2010.

Meanwhile, the steep drop in Sterling since the Brexit vote combined with a recovery in global oil prices has pushed prices higher in recent months in the British Isles (UK inflation is at its highest level in over three years), leading to fears that rising inflation will erode consumer spending which has been the main growth driver of the UK economy.

Rising inflation has fuelled expectations that the Bank of England could hike interest rates quicker than expected, particularly after the minutes of the March monetary policy meeting showed that one policymaker voted for a rate hike. This may have been the reason behind the recent recovery in sterling despite the official start of the Brexit process. However, some economists believe that a rise in inflation driven by energy prices or by the exchange rate is less likely to prompt a rise in interest rates. This will be more dependent on any  impact of rising wages on inflationary expectations.

Another source of political uncertainty which is likely to impact the value of Sterling is the recent confirmation that another Scottish independence referendum will be taking place.

The majority of foreign exchange analysts expect sterling to decline further as the Brexit negotiations unfold with several of these projecting that the British pound will drop to parity (1:1) against the euro. One investment bank in particular recently indicated that their negative view on sterling is underpinned by the fact that as negotiations become increasingly difficult during the next two years, the foreign exchange markets will bet on the worst possible outcome for the British economy – i.e. a “hard Brexit”. 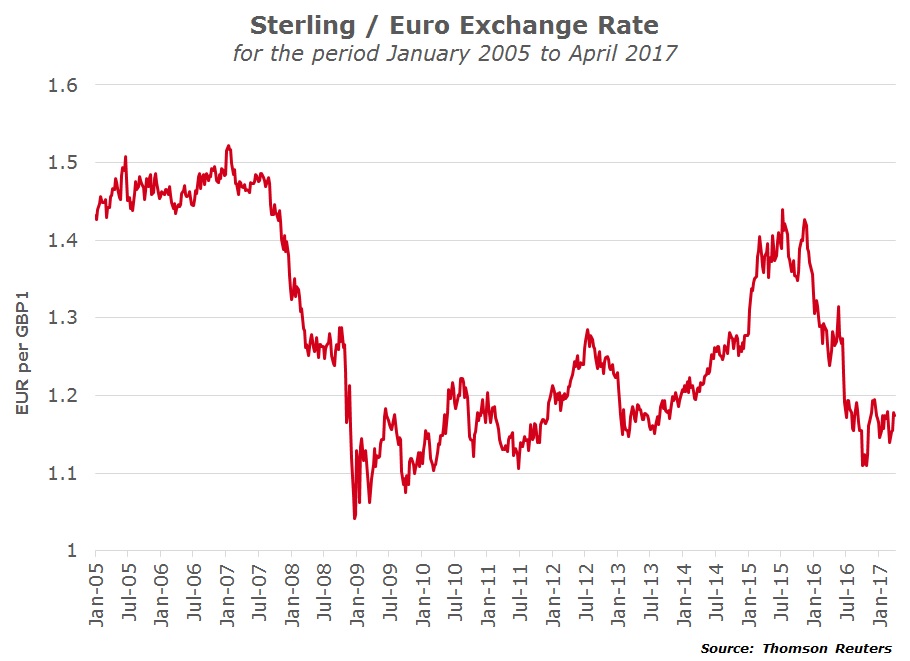 However, other analysts believe that the triggering of Article 50 is already priced into the current exchange rate and therefore they are not of the view that the pound will fall any further. In fact, these analysts claim that the currency could actually start to recover once there is less uncertainty on the outcome of the deal with the EU and other trading partners.

Reports across the British media in recent days speculated that the UK is set to keep key European Union regulation in force since there isn’t sufficient time to substitute the entire legal framework, specifically in matters such as agriculture and fishing. As a result, the UK Government could soften its stance towards the EU trade arrangements, which could benefit the outlook for the UK.

In view of this hypothesis, some of these analysts indicated that they expect sterling to fluctuate around current levels and possible ease to GBP0.90 against the euro before recovering to GBP0.72 by the end of 2018.

Since exchange rates are measured against one another, political risks and economic developments in other regions across the world will also play a role on the value of the sterling going forward. In particular, political risks in the US and also across the Eurozone remain key determinants of the value of sterling against both the US Dollar and the euro in the months ahead.

The US Dollar recently dropped to 4-month lows against a basket of currencies after the Trump administration failed to push through legislation to overhaul the healthcare sector. The vote had been viewed by market players as an important test of Trump’s ability to deliver on his electoral promises encompassing tax cuts and infrastructure spending. The dollar had already weakened in early March after the Federal Reserve hiked interest rates but did not signal a more aggressive pace of monetary tightening as many had anticipated.

Across the EU, market players are also closely monitoring political developments ahead of the upcoming French presidential elections. Although concerns may have subsided following the Dutch elections and recent polls in France, the euro is likely to remain very volatile in the run up to these elections set for between 23 April and 7 May. The euro is anticipated to strengthen (against various currencies including the Sterling and the US Dollar) if the centrist candidate Emmanuel Macron emerges victorious. On the other hand, a victory for the far-right anti-EU leader Marine Le Pen would undoubtedly lead to a collapse in the value of the euro against major currencies and as such a strengthening of sterling from this perspective.

The sterling exchange rate is very much in constant focus for several Maltese investors not only due to the impact on the fortunes of some companies listed on the MSE but also due to the exposure of various investors to foreign currency markets as well as international stock exchanges.