PTL Holdings plc was established in 2013 and in November 2014, it issued €36 million in bonds in order to repay bank loans and other short-term borrowings taken out to finance the acquisitions of two of its subsidiaries, SAD and APCO.

PTL Holdings is the holding company of the technology division of the Hili Ventures Group which was created through a series of acquisitions initially with PTL Limited (formerly Philip Toledo Ltd) in 2012, followed by SAD in June 2014 and APCO in August 2014. SAD was purchased for €40.35 million and APCO for €8.8 million.

SAD operates 24 Apple stores in various cities across Poland under the iSpot brand through a non-binding, non-exclusive Apple Premium Reseller (APR) franchise agreement with Apple Inc. SAD is the largest retailer of Apple in Poland.

Since SAD is by far the largest contributor to revenue and EBITDA of PTL Holdings plc, it is important for investors to monitor the specific performance of SAD on a regular basis via the financial statements of PTL Holdings. SAD’s business model is entirely dependent on the Apple brand and its ability to maintain its franchise relationship with Apple.

On 31 August, PTL Holdings plc published its interim financial statements for the six-months ended 30 June 2016 and as such, it is worth pointing out some of the key highlights and comparing these to the full-year projections prepared by the company which were published in the Financial Analysis Summary on 28 June 2016.

It is also worth comparing the revised 2016 projections published on 28 June 2016 to earlier projections prepared by PTL Holdings. Since PTL’s 2015 Financial Analysis Summary was published after the statutory period of 30 June, the report in August 2015 not only included an update to the forecasts for 2015 but projections for 2016 were also mandatory.

Additionally, it is also important to look back at some of the milestones that PTL had disclosed to the market at the time of the launch of its bond issue. In November 2014, PTL had disclosed some key figures as part of its 3-year business plan. In fact, the top management of PTL had announced that it expects total revenue of the PTL Group to increase from €117 million in 2015 to €145 million in 2017 and EBITDA to surge to €10.8 million in 2017 from an expected €7.5 million in 2015. Undoubtedly, the performance of SAD was fundamental in seeking to achieve this envisaged growth.

During the first half of 2016, PTL generated total revenue of €40.6 million, representing a significant decline from the turnover in the first six months of 2015 of €77.3 million. Both the June 2016 FAS and the 2016 Interim Report indicate that during the first few months of 2015, SAD generated €34.8 million in revenue from its export business. However, with effect from the second quarter of 2015, SAD terminated this area of activity due to a change in VAT regulations and the risks associated with cross border sales of technology items. The decline in revenue compared to the first half of 2015 is therefore mainly as a result of this significant change in the overall business operations. 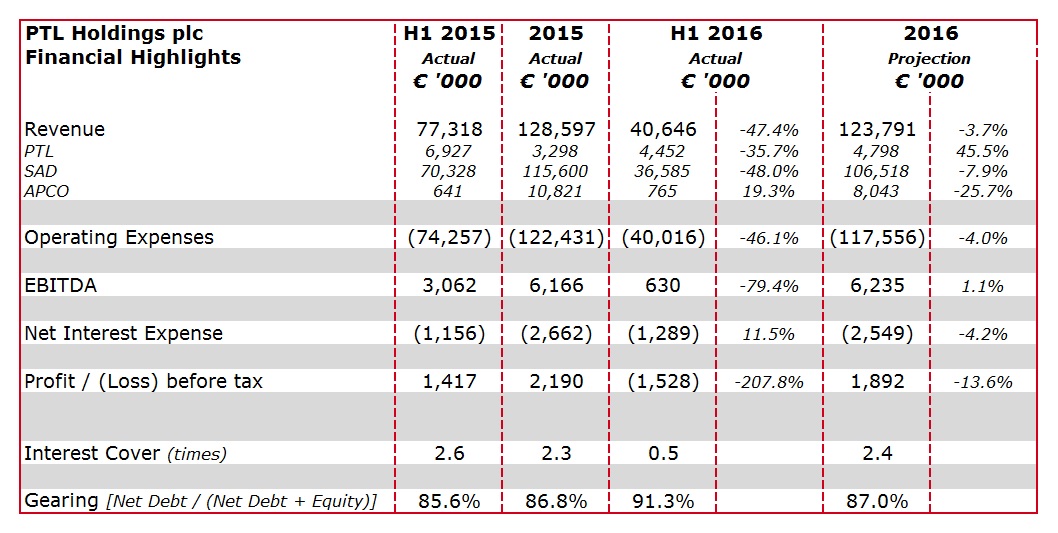 Due to the decline in revenue, PTL incurred an operating loss of €0.25 million in the first half of 2016 compared to a profit of €2.65 million during the first six months of 2015.

The Financial Analysis Summary dated 28 June 2016 states that in 2016, the Directors project overall revenue to amount to €123.8 million (up from the previous forecast of €118.6 million) and EBITDA to amount to €6.2 million (down from the previous forecast of €6.3 million). Although in the 2016 interim financial results, the Directors claim that the second half performance will improve compared to the first half, it is difficult to comprehend how the 2016 full-year projections can be achieved given the weaker performance during the first six months.

PTL was aiming to retain profits within the company to repay part of the company’s bank borrowings which would have helped the company reduce its very high level of leverage. At the time of the bond issue, PTL was among the highest leveraged companies among local bond issuers with a gearing ratio of 86% (shareholders’ funds of €7.5 million compared to net debt of €46 million). The company’s 3-year business plan envisaged that the gearing ratio of PTL would reduce to 61% in 2017 following the retention of profits generated in 2015, 2016 and 2017. Unfortunately, the recent financial performance did not match earlier expectations and PTL’s gearing ratio has now weakened to 91.3% (shareholders’ funds of €4.8 million compared to net debt of €50.3 million) as at 30 June 2016. Given the setback in the financial performance as well as the company’s metrics, it is therefore disappointing that an interim dividend of €1 million was distributed in 2015. Instead, the directors ought to retain all profits within the company to reduce the level of leverage.

As a result of the changing business dynamics and the resultant impact on the financial performance and position of the company, PTL ought to update the market with revised forecasts and explanations for the divergence from the plans disclosed at the time of the bond issue which after all only took place two years ago.

The divergences in the business model and, as a result, the underlying financial metrics warrant increased disclosure from PTL. Other bond issuers who may have suffered the same fate and may not be achieving their original projections should also be updating the market through appropriate company announcements. The numerous bondholders of such issuers should be aware of any new plans and financial targets.

As the capital market grows, it is essential for issuers to play a more important role in investor education through regular company updates followed by information meetings. Advisors and non-executive directors of companies that tapped the bond market in recent years should ensure that this more active communication strategy with the market at large takes effect.