Last week was characterised by increases in interest rates by various central banks as global monetary policymakers ramp up the battle against the highest levels of inflation seen in decades.

Inflation began to rise rapidly worldwide as economies emerged from COVID-19 induced lockdowns following the massive fiscal and monetary stimulus measures unleashed during the pandemic, and it worsened markedly as energy and food prices jumped after Russia invaded Ukraine in late February 2022.

Following the announcement by the European Central Bank on 8 September of a 75-basis point hike in interest rates, the Swedish central bank commenced last week’s series of monetary tightening announcements with a larger-than-expected increase of 1 percentage point taking its main policy rate to 1.75% on Tuesday. Sweden’s Riksbank said that monetary policy will need to be tightened further to bring inflation back to its 2% target, and further rises to its policy rate are projected over the next six months.

Most of the attention was centred around the decision by the world’s largest central bank as the US Federal Reserve announced on Wednesday a 0.75 percentage point increase for the third time since June. The Fed funds rate increased to between 3% and 3.25% compared to a range of 0% to 0.25% at the start of the year. The Federal Reserve Chairman Jerome Powell stated that there is no “painless” way to bring down inflation. In essence, many economists interpreted his speech as a clear indication that further rate hikes will take place until inflation falls to 2% even if a recession is triggered in the US. In fact, the so-called ‘dot plot’ showing the projection of future rate rises indicated that a majority of policymakers now expect the average funds rate to be at 4.4% at the end of the year and to peak at 4.6% in 2023 before falling back to about 2.5% in 2025.

Norway’s central bank raised its key rate by 0.5 percentage points to 2.25% (its highest level since 2011) and also warned that further interest hikes are necessary as the inflation rate reached 6.5% in the Nordic country.

On its part, the Swiss National Bank ended its negative-rate era as it raised its policy rate by 0.75 percentage points to 0.5%. The central bank also promised to intervene in the currency market to prevent large swings in the value of the Swiss franc which is widely seen as a “safe haven”. The Swiss National Bank’s move marks an end to Europe’s experience with negative rates.

The Bank of England hiked rates by 50 basis points on Thursday (its sixth consecutive increase this year) to a 14-year high of 2.25% as the central bank warned that the UK economy is already in recession and inflation would remain in double-digit levels for most of the year. In its updated forecasts, the monetary policy council said that inflation would peak at just under 11% next month which is lower than the 13.3% level it had projected in August. Many analysts had expected the BOE to announce a hike of 75 basis points similar to the recent decision by the ECB. The Bank of England also approved the start of the sale of its stock of UK gilts totalling GBP860 billion which are held on its balance sheet – a process known as ‘quantitative tightening’. This will begin with the sale of GBP80 billion within the next twelve months. Various economists are forecasting that the BOE will have to go much further in its tightening cycle, forcing rates to a peak of between 4.75% and 5% in 2023.

The decisive action taken by these various central banks naturally led to sharp moves across various asset classes across the world. 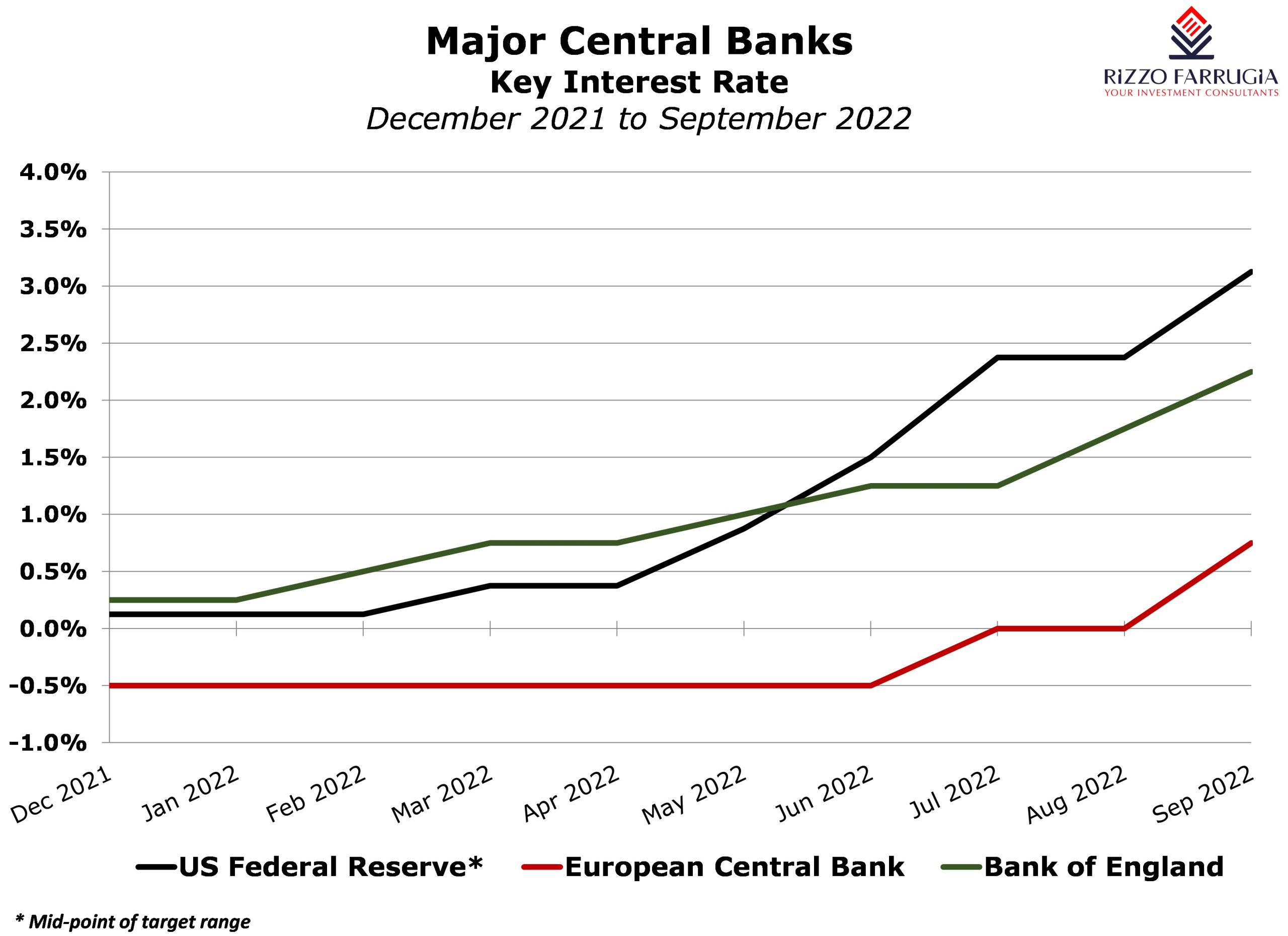 The euro hit a new 20-year low against the US Dollar of $0.9772 while the yield on the benchmark 10-year German bond surpassed the 2.1% level for the first time since 2013 amid increased fears of a prolonged recession that are weighing heavily on sentiment toward Eurozone assets. It is worth highlighting that the 10-year German bond yield had fallen to a recent low of 0.7% in early August.

In the UK, sovereign bonds (known as gilts) also saw their yields surge to their highest levels in many years. Two-year gilt yields climbed to 4.5% (the highest since August 2008) while the 10-year gilts also rose to above 4% compared to just under 1% at the start of the year. These sharp moves in the UK sovereign bond market were not only as a result of the action by the Bank of England but also due to the major announcement by the new Chancellor of the Exchequer of a series of tax cuts amounting to GBP45 billion in order to try to stimulate growth. The UK’s biggest tax cuts since 1972 triggered a rapid decline in Sterling against the US Dollar which plunged to an-time low of $1.035 representing a decline of 23% since the start of the year.

Foreign exchange markets were also impacted last week in another major historic move as Japan intervened in the currency markets for the first time since 1998. The Japanese central bank sold US Dollars to support the collapsing Japanese Yen, which had slumped to a 24-year low, as the Bank of Japan maintained its ultra-easy monetary policy despite lowering its growth forecast for 2022 and raising its inflation predictions. Japan is the only major economy not to have tightened monetary policy this year as the country now replaces Switzerland as having the lowest interest rate in the world.

The future direction of interest rates seems to be amply clear by the actions and statements made by the various central banks last week. The strong guidance by the US Federal Reserve that it will continue to raise interest rates into next year essentially raised the pressure on other central banks to either carry out similar monetary tightening measures or risk a rapid depreciation of their currencies. As a number of clear differences continue to emerge among various central banks and governments actions, this will inevitably lead to strong market reactions across various asset classes such as the global bond rout and the historic slump in the value of the British pound.