In last week’s article I highlighted that as at 30 June 2020, Apple Inc accounted for circa 44% of the investment portfolio of Berkshire Hathaway Inc which at the time was valued at around USD90 billion.

The share price of Apple has been among the most positive performers on the S&P 500 in recent months. Since 30 June 2020, Apple’s share price jumped by nearly 40% and last week the market capitalisation of Apple exceeded USD2 trillion – another remarkable milestone for the iPhone manufacturer.

Apple is the first publicly traded US company in the US to reach a USD2 trillion market capitalisation and what is most remarkable is that Apple had reached the USD1 trillion milestone on 2 August 2018. As such, the share price of Apple doubled in value in just over two years. Moreover, following the outbreak of the COVID-19 pandemic earlier this year, Apple’s share price had tumbled by 35% between mid-February and 23 March 2020. Since the low of USD212.61 recorded on 23 March (which was also the lowest since early September 2019), the equity has climbed by a staggering 137% in only a few months.

At the time of the demise of Steve Jobs in 2011, several commentators had questioned the ability of Tim Cook to match the achievements of the Apple co-founder. It is therefore worth highlighting that Apple’s market cap was USD348.8 billion when Tim Cook became CEO on 24 August 2011 and in 9 years, the share price of Apple has grown by over 470%.

According to a note published last week from one of the many financial analysts that review Apple, they opined that the company has “significant iPhone upgrade potential” in China ahead of the launch of its next flagship smartphone since just over 68% of the iPhone users in China use devices that are at least 2 years old.

Apple’s next iPhone is expected to be able to connect to 5G networks and other analysts claim that the launch of the 5G iPhone is a “once in a decade opportunity”.

In fact, another analyst predicts that by the time Apple releases a 5G iPhone in the coming months, it could have between 300 million and 350 million prospective customers ready to upgrade their smart phone. In view of this “super cycle”, this specific analyst upgraded the Apple price target to USD515 which is the highest price target among the 41 analysts that publish price targets for Apple. The lowest price target is USD314.

In recent weeks, the rally in Apple shares gathered momentum after the company had published on 30 July its Q3 results as at 30 June 2020 which positively surprised most financial analysts. Apple reported an 11% increase in overall revenues to USD59.7 billion with growth registered in all its five product categories. Revenue from sales of iPhones rose 1.5% year-over-year to USD26.4 billion, substantially better than expectations of USD22 billion. Apple reported double-digit growth in iPads, Macs, and also wearable devices comprising AirPods and the Apple Watch. Earnings per share climbed by 18% during the three-month period to the end of June.

The financial performance contrasts with expectations when in February 2020, Apple had issued a revenue warning and withdrew its guidance due to COVID-19 which sent the shares into a tailspin dropping by over 30% within a few weeks.

One of the major criticisms of Apple over recent years was its growing dependence on the sale of iPhones and this led to significant volatility in the company’s share price from one quarter to the next when the company reported its quarterly earnings and gave guidance on the expected performance in the following quarter mainly based around iPhone orders and shipments.

The success in making the company less dependent on iPhone sales can be demonstrated from the recent quarterly results showing that revenue derived from the iPhone accounted for 44% of overall revenue during Q3 2020 compared to 55% just two years ago. 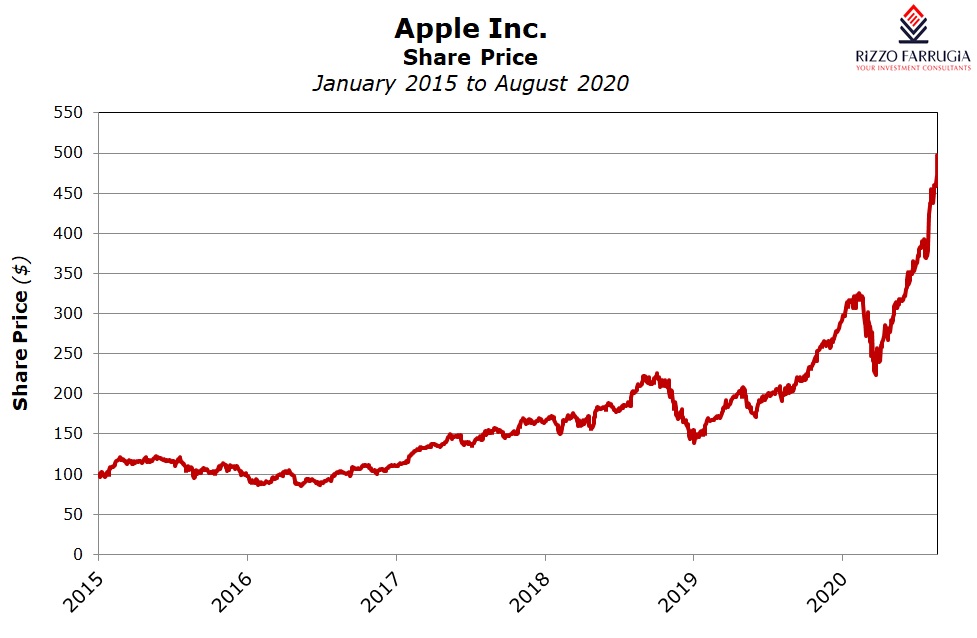 Another important announcement on the same day the company published its Q3 results on 30 July and which could have contributed to the continued excitement around Apple shares, was the news that a 4-for-1 share split will take place at the end of August. Apple stated that the share split will help “to make the stock more accessible to a broader base of investors”. As such, each Apple shareholder at the close of business on 24 August 2020 will receive three additional shares for every share held and on Monday 31 August, trading will begin on a split-adjusted basis. This should theoretically result in the absolute price of Apple shares dropping by 75% to circa USD126 as a result of the additional shares being allotted to shareholders.

In addition to the payment of cash dividends on a quarterly basis, Apple has also been regularly conducting share buy-backs given the huge amount of excess liquidity as a result of the consistently strong level of free cash flow. Since kicking-off its share buy-back programme in 2013, Apple bought a total of USD327 billion or 2.5 billion of its own shares between 2013 and 2019 at an average price of USD131 per share. The reduction in the number of shares together with the consistently strong levels of profits translated into an increasing Return on Equity. Few investors may know that the ROE of Apple is around the 70% level – an impressive return by any measure.

Although the milestone of a market cap of USD2 trillion is a major achievement and possibly more symbolic than anything else, it vindicates the success of the Apple CEO in changing the company’s focus and dependence away from a hardware company towards a software company with a growing recurring revenue from the services business. In 2017, the CEO set an ambitious growth target by indicating that Apple wanted to double its 2016 services revenue by 2020, equating to roughly USD46 billion by this year. Apple managed to achieve this target six months ahead of schedule since it reported USD13.16 billion in services revenue during the last quarter, accounting for about 22% of the overall revenue.

The rally in the share price over the past two years leading to the price to earnings ratio rising to 38 times from below 15 times until early 2017 clearly indicates that there was a major reappraisal of the company’s business model towards a software company.