Last week, PG plc published its annual financial statements as at 30 April 2021 and immediately after the publication of the annual report, a virtual meeting for financial analysts was organised by the company to provide a detailed review of the performance of its supermarkets and retail businesses as well as the Zara® and Zara Home® franchise operations.

PG’s Chairman Mr John Zarb also provided an overview of the growth in revenue being experienced during the first quarter of the 2021/22 financial year.

The 2019/20 financial year to 30 April 2020 had shown the initial impact of COVID-19 during the last two months of the financial year especially on the retail and catering outlets within the PAMA and PAVI shopping villages as well as the Zara® and Zara Home® franchise operations. Meanwhile, the results of 2020/21 financial year published last week were again impacted by a number of disruptions to certain segments of PG’s business due to the restrictions imposed again for a 6-week period towards the end of the financial year and the inevitable disruption at the start of the financial year in May 2020 following the easing of measures after the first COVID-19 lockdown.

PG waived all rents to tenants for certain periods during the 2020/21 financial year at the retail and catering outlets within the PAMA and PAVI shopping complexes and moreover, on an exceptional basis, tenants were only charged rent based on their level of revenue and did not enforce the contracted minimum rent clauses that are stipulated within the rental agreements. This had a sizeable impact on the overall rental income generated by the group. According to the Chairman of PG, this is estimated to have amounted to a reduction in rental income of circa €600,000 during the period from 1 May 2020 to 30 April 2021.

In addition to this, PG’s financial performance was also negatively impacted by the decline in revenue from the Zara® and Zara Home® franchise operations. These retail outlets had to be closed for a 6-week period towards the end of the financial year in line with the restrictions imposed by the health authorities and were also affected by the sharp decline in tourism which tends to have a larger impact on this line of business (especially the flagship store in Sliema) when compared to the supermarket operations.

When looking at a longer-term trend, it is interesting to note that the operating profit of the supermarkets segments has grown consistently over recent years from under €8.7 million in the 2017/18 financial year to €13.7 million during the past twelve months. Meanwhile, the operating profit of the franchise operations has declined from a record of €3 million in 2017/18 financial year prior to the large extension to the flagship store in Sliema to €2.6 million last year. In this respect it is worth highlighting that the operating profit of this business segment in the 2019/20 financial year, which was also impacted by the start of the pandemic, had amounted to just under €3 million. It would therefore be interesting to gauge the full-potential of the franchised stores in a financial year which would not be interrupted by COVID-19 especially following the sharp increase in online sales. In fact, during last week’s meeting it was revealed that Zara® online sales increased by over 100% to €4.1 million over the previous financial year and accounted for 23% of overall sales from this segment. The overall margin from this business segment during a normalised year with the enlarged store and the strong incidence of online sales would also be of interest to gauge in the coming years. 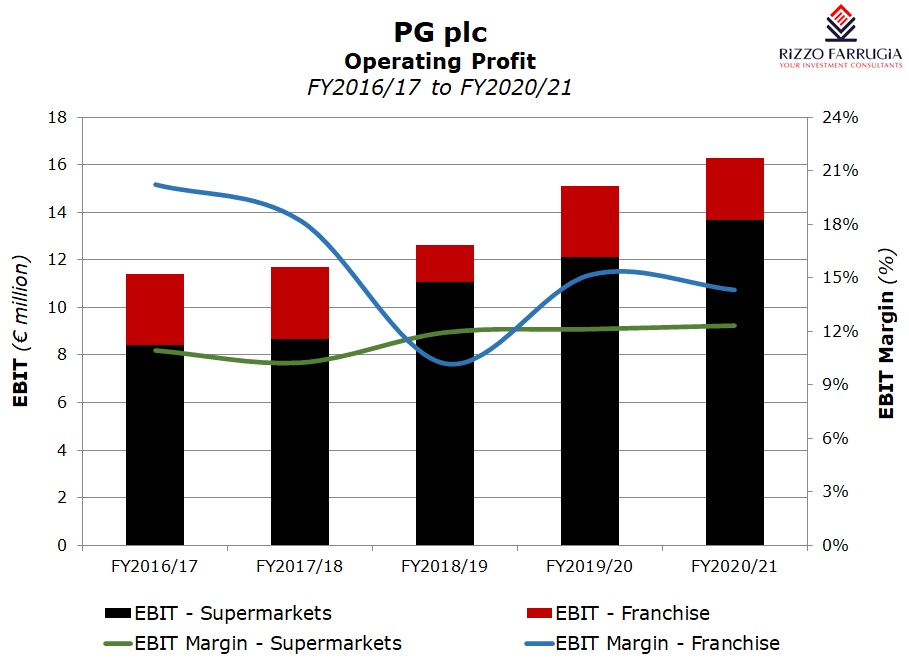 PG distributes dividends on a semi-annual basis with an interim dividend generally payable by mid-December and a final dividend payable in July prior to the publication of the annual financial statements in August and the Annual General Meeting in October. As such, no further dividend was announced last week. However, it is worth recalling that an interim net dividend of €2.0 million was distributed in December 2020 while a second net dividend of €3.2 million was paid in July 2021. The total dividend payments in respect of the 2020/21 financial year therefore amounted to €5.2 million (equivalent to €0.0481 per share) representing a growth of 8.3% over the dividends paid in respect of 2019/20. The dividend payout ratio in 2020/21 of 49.3% is very much in line with the dividend policy established at the time of the IPO in early 2017.

Dividends have grown consistently since the maiden dividends following the IPO and given the sound business model of the group and the solid financial base, investors should expect this trend to continue also in the coming years despite the ambitions to seeking investments in new supermarkets and/or retail complexes in the future.

In fact, PG’s annual report shows that net bank borrowings continued to decline and as at 30 April 2021 these amounted to €8.5 million compared to €14.9 million in 2019/20 and €22 million in 2018/19. During last week’s meeting, PG’s Chairman indicated that the company should manage to repay all bank borrowings by the end of the current financial year in April 2022 given the consistent strong cash flow generation on an annual basis. In effect, the group’s free cash flow (representing the cash generated from operating activities less the funds used for investing activities) totalled €11.4 million in 2020/21 which is twice as much the amount of cash spent by PG during the year for the servicing and/or repayment of borrowings, as well as for the payment of dividends.

This positive cash flow should continue also during the current financial year with Mr Zarb’s presentation showing very strong turnover levels between May and July 2021 which is the first quarter of PG’s current financial year. Revenue from the supermarket segment grew by a further 13% between May and July 2021 with the franchised operations registering a growth of 55% in recent months.

The very low level of financial leverage and consistently strong financial performance allows PG to target further areas of expansion. This had been mentioned by the company over recent years and during last week’s meeting it was stressed once again that a number of potential projects are being assessed but nothing has yet been finalised.

PG’s Chairman also made reference to the proposed extension of the PAMA Shopping Village which is still awaiting approval from the Planning Authority. Mr Zarb confirmed that there is consistently high demand for space by tenants at both PAMA and PAVI and should this extension to the shopping village be approved, it would satisfy the demand being seen from potential tenants.

While it may be disappointing that no tangible expansion plans have been confirmed as yet, shareholders should be happy that the growth in the existing business lines continues to exceed expectations and should lead to continued high shareholder returns in the years ahead.