Most of the largest public companies in the US have already published their financial results for the period to 30 September 2022. While the companies within the energy sector, as expected, reported record quarterly profitability levels, the other main theme that dominated the current earnings season was the remarkable movements in most of the share prices of the Big Tech companies, namely Alphabet, Apple, Amazon.com, Microsoft and Meta Platforms in the aftermath of their announcements.

As the weakening economic environment is very likely to continue to negatively impact revenue generation among most of the Big Tech names, investor sentiment soured considerably. The share prices of Alphabet, Amazon.com, Microsoft and Meta Platforms posted sharp double-digit declines as their announcements were released with most companies giving up almost all of their exceptionally strong gains registered during the pandemic.

Meta Platforms ranks as the worst performer across the entire S&P 500 Index so far this year with a decline of over 70% translating into a loss of market cap of over USD600 billion. During the 3-month period to 30 September, advertising revenue (which makes up 98% of overall revenue through its Facebook and Instagram services) dropped by 4% while costs surged by 19% causing quarterly profit to fall by 50%. Investors have become increasingly sceptical on the company’s huge investment in the metaverse which is basically a virtual reality world that people access via headsets. In view of this remarkably sizeable investment, Meta has gone from its highest free cash flow in its history during Q4 2021 at USD12.7 billion to the lowest in more than 10 years of USD0.2 billion only a few months later.

The decline in advertising revenue was worse-than-expected not only as a result of the current economic downturn but also from increased competition from rivals such as Amazon and Apple as well as some of the newer social media companies such as Tik Tok.

Alphabet, which generates circa 80% of overall revenue from advertising, was also hit by worse-than-expected declines in advertising. For example, in Q3 YouTube advertising revenue dropped 2% year-on-year to USD7.07 billion. YouTube’s revenue on a year-over-year basis has never decline since Alphabet started disclosing the segmental results in 2019.

Amazon and Microsoft are becoming increasingly dependent on the growth from cloud services. Although many investors hoped that this sector will prove resilient even in weak economic conditions, several analysts are highlighting the financial risk of the capital-intensive nature of building data centres to support cloud services. Amazon’s cloud segment (AWS) is essentially the cash cow of the company. Amazon reported its first quarterly sales growth below 30% with the result that the AWS segment had a 26% operating margin in the past quarter (compared to 29% previously). Although the cloud segment had a 26% operating profit margin, Amazon’s overall operating margin was a mere 2%. Amazon is still generating plenty of cash from its operations to fund its investments but recently its free cash flow turned negative in view of the growth in capex. Moreover, guidance for the upcoming quarter was well below expectations. This caused the company’s share price to plummet by over 20% in the days following the recent announcement – the worst selloff since November 2008.

On the other hand, Apple’s business revolves around hardware and services that is still very much in demand and as such, investors believe that the company is in a better position to ride out the recession compared to its peers. Sales of the iPhone, which typically account for almost 50% of the company’s total revenue, grew by 10% during the quarter to 30 September. Although this was slightly less than analysts had expected, it must be seen in the light of the tough comparative period with 39% growth in the same quarter last year.

Another interesting trend is that while global smartphone shipments have declined by 9% in Q3, Apple’s iPhone shipments have increased by 8%. As such, Apple’s performance looks very strong when compared to its competitors as it is evident that Apple’s premium phones are being impacted less negatively than other smartphones. 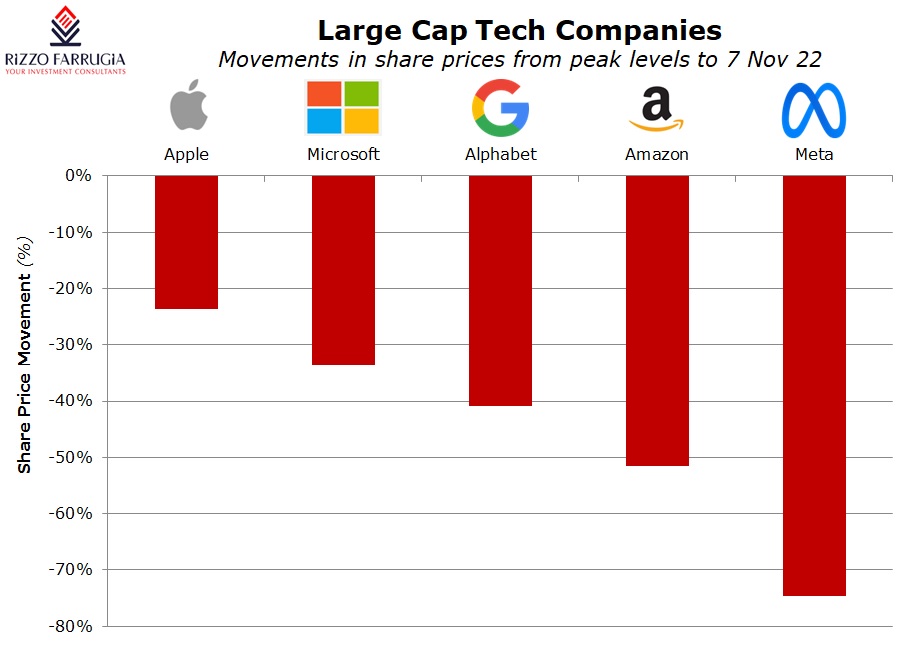 However, Apple has not escaped the downturn in consumer and corporate spending. Despite rising by 5% year-on-year after the adverse impact of the strong dollar, Apple’s ‘Services’ revenue (including the App Store, Apple Music, Apple Pay, Apple TV+ and others) was slightly lower than anticipated as advertising and gaming revenue faltered. The ‘Services’ segment, with revenue of USD19.2 billion during the past quarter, has a very strong gross profit margin of over 70%.

Apple generated USD122 billion in cash from operations during the 12-month period to 30 September. The company has refrained from any massive investments such as that of Meta Platforms and instead it is returning sizeable amounts of cash to shareholders, mainly through share buybacks. Apple repurchased USD89 billion worth of its shares during the 12-month period to 30 September. Despite this, the company still had a net cash balance of USD49 billion at the end of September.

Following the sharp movements in the share prices of Alphabet, Amazon.com, Microsoft and Meta Platforms over recent weeks, there are now only 3 companies in the US with a market cap greater than USD1 trillion (Apple at USD2.2 trillion, Microsoft at USD1.7 trillion and Alphabet at USD1.2 trillion).

The drop in total market capitalisation of the US technology companies has indeed been remarkable. In fact, in 2021 there were 7 companies in the ‘Trillion Dollar Market Cap Club’ as Amazon, Meta, Tesla and Netflix all suffered sharp declines over the past 12 months following the remarkable change in sentiment towards the tech sector.

At a market cap of USD2.2 trillion, Apple is now worth almost as much as the combined values of Amazon (USD920 billion), Meta (USD256 billion) and Alphabet.

Apple first reached the USD1 trillion milestone in August 2018 and in January 2022, it became the first company to reach a market cap of USD3 trillion. Although Apple’s share price has dropped just over 20% from its peak, the company has clearly fared better than the other Big Tech companies which registered much steeper declines.

Undoubtedly, the short-term outlook for the Big Tech companies remains challenging given the economic headwinds and the interest rate environment. Moreover, the size and complexity of these companies not only make them a target for regulators but also makes the historic rate of growth a greater challenge to emulate. Nonetheless, these companies are now priced at more reasonable valuation multiples. Given the dominance and financial strength of most of the Big Tech companies, long-term and patient investors are likely to continue to be rewarded handsomely in the years ahead similar to the stellar returns over past years.