Last week, AX Group plc published a prospectus in connection with the issuance of two new unsecured bonds for a total of €25 million – the 7-year bond maturing in 2026 has a coupon of 3.25% and the 10-year bond due for redemption in 2029 has a coupon of 3.75%.

The proceeds from the bond issues will be used to part-finance the acquisition of two sites (€7 million for land situated in ‘Tas-Sienja’, Marsa and €9 million for the property known as ‘41 Merchant Street’, Valletta), to refinance part of existing bank borrowings and to finance general corporate requirements.

This is the first time that AX Group plc is issuing bonds directly. In the past the AX Group issued bonds through its finance arm, namely AX Investments plc. In fact, AX Investments have an outstanding bond of €40 million which matures in 2024.

AX Group plc is the parent and holding company of the wider group which in turn, through various subsidiaries, operates across four main divisions: (i) Hospitality; (ii) Healthcare; (iii) Construction and (iv) Property Development. AX Group is owned by Chairman Angelo Xuereb with a 55% stake and the balance of 45% is held equally between his three children.

Although AX may be synonymous with the construction industry, it is essentially largely a hospitality company nowadays. The seven properties within the hospitality division generate around 70% of the group’s turnover and nearly 85% of total gross operating profit (GOP). The two main contributors are the ‘AX Seashells Resort by Suncrest’ and ‘The Palace Hotel’ which in aggregate contributed around 47.6% of the group’s total revenue of €56.8 million in the last financial year to 31 October 2018. These two hotels generate around 70% of the group’s hospitality revenue and circa 71% of gross operating profits of the hospitality division.

Interestingly, Section 15 of the registration document states that subject to approval from the relevant authorities to undertake the development of the Verdala Site, the AX Group intends to issue additional bonds for an amount of €50 million. Moreover, simultaneously with the issuance of these ‘Tranche II’ bonds, the existing shareholders intend to launch an offer to the public for 25% of the entire issued share capital.

Chairman Angelo Xuereb intends to sell 4% of the company thereby retaining majority control with a stake of 51%. Richard Xuereb will dispose of his entire stake of 15% and DX Holdings Limited and The Lotus Co Ltd will both sell 3% thereby reducing their respective shareholding to 12% each. The prospectus also reveals that a significant part of the proceeds of the share offer will be reinvested into the €50 million ‘Tranche II’ bonds and the balance will then be available to the general public.

The expected dividend policy was also disclosed with the company indicating that it aims to pay up to 40% of the distributable profits subject to a minimum overall payment of €5 million per annum.

The prospectus also provides a detailed explanation of the major upcoming investments and developments earmarked by the group over the next 7 years. In addition to the developments currently in the process of completion in Sliema and Mosta, the largest investment will be the development of the former ‘Verdala Hotel Complex’ located in Rabat. The proposed plans for the Verdala site presently include the development of a 40-suite boutique hotel (which in conjunction with the 19 units on an adjacent site at Virtu Heights would comprise a 59-suite upscale hotel property) and the construction of a residential complex comprising 100 luxury apartments. This development is expected to take place between 2020 and 2023 at an estimated cost of €37 million.

Moreover, between 2023 and 2024, the AX Group plans to demolish and rebuild the Sunny Coast Resort & Spa in Qawra at an estimated cost of €18 million and subsequently an amount of €13 million will be invested in the extension of the ‘AX Seashells Resort at Suncrest’. An additional two floors will be added thereby creating a total of 200 rooms coupled with the refurbishment of the entire hotel and lido area. 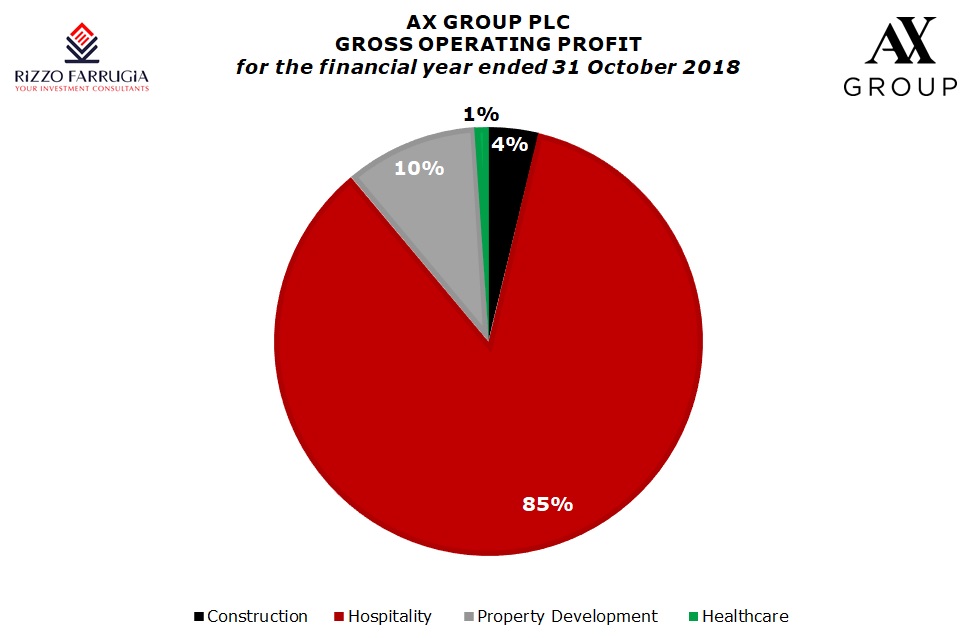 The prospectus published last week gives the financial forecasts for the 2018/19 financial year which came to an end on 31 October 2019 and projections for the current financial year to 31 October 2020. The AX Group registered a record performance in 2017/18 with revenues of €56.8 million and earnings before interest, tax, depreciation and amortisation (EBITDA) of €20.9 million (representing an increase of 36.3% from the previous year), translating into an EBITDA margin of 36.9%.

The AX Group is expected to have experienced a decline in both its revenues as well as in its EBITDA figures during the latest financial year to 31 October 2019 on the back of a somewhat weaker tourism market in the first few months of 2019, a lower number of projects for the construction division as well as the lack of any property sales. In fact, the AX Group is expected to report a 7.7% decline in revenues to €52.4 million and a 23.5% drop in EBITDA to just over €16 million. However, during the current financial year to 31 October 2020, revenue is expected to jump to a record €66.48 million and EBITDA is expected to increase to €25.45 million. Most of this projected improvement however is expected to emanate from the property development division on the back of the projected sales of 8 residential units in Sliema (currently under development), 2 apartments at TG Complex in Mosta as well as 11 out of 22 plots in Mosta which are presently subject to promise of sale agreements.

The AX Group is essentially a hospitality company with a growing portfolio of property development projects – the main being the Verdala site and in later years the sizeable project in Marsa. The only other equity of a hospitality company is International Hotel Investments plc which has a higher exposure to countries outside Malta but also with possible large property development projects covering two sizeable areas in Malta.

Hopefully, should the share offering of AX Group take place in the next few months, the company will publish financial forecasts also for future years to enable investors to analyse the impact of the total additional borrowings of €75 million on the overall financial strength of the company. It is important for the investing publish to gauge the potential financial benefits over the next few years from the sizeable investment programme being contemplated.