BMIT is a subsidiary of GO plc given the latter’s 51% shareholding in the technology company and as such, the results of BMIT are consolidated in the Group financial statements of GO plc.

The other important subsidiary of GO plc is the Cypriot company Cablenet Communications Systems plc (GO owns 62.2% of Cablenet) whose bonds are listed on the MSE. Cablenet also published its interim financials last week.

On its part, GO plc very recently proceeded with the listing of a €60 million bond issue and in line with regulatory requirements, the company also published its forecasts for the current financial year to 31 December 2021.

As such, in view of the various reporting lines of the main constituents of GO, a lot of information is available for the investing public to gauge the performance of the entire Group. As indicated in some of my recent articles last year, following the start of the COVID-19 pandemic the performance of companies within the telecoms and technology sectors were more resilient and robust than in other sectors such as hospitality, aviation, retail, etc. This has also been well-documented across the international media with some of the share prices of the largest technology companies benefiting markedly from the stay-at-home trend experienced last year as lockdown measures were introduced and technology became a critical enabler in the circumstances.

The resilience of operators within the telecoms sector and the continued growth in technology companies that was widely reported across the international media was also evident in the financial statements of both GO as well as BMIT during 2020 and the first half of 2021.

In 2020, BMIT had reported that profits after tax increased by 6.6% to €4.74 million which exceeded the projected figure of €4.67 million published in the IPO Prospectus in late 2018. The positive financial performance continued during the first half of 2021 as BMIT reported last week that revenues surged by 9.4% to €12.8 million (a record at interim stage), EBITDA grew by 11.8% to €5.7 million and pre-tax profits rose by 13% to €4.38 million compared to €3.88 million in H1 2020. Investors need to pay close attention to margins achieved by various companies over all reporting periods and BMIT reported last week an improvement in its EBITDA margin to 44.5% compared to 43.6% in H1 2020. Another key ratio that investors need to monitor is the return on equity with BMIT’s annualised return on equity of 61.3% based on the results for the first half of 2021 .

In its outlook as part of the half year report published last week, BMIT noted its cautious optimism that the current positive performance can be sustained into the foreseeable future. Meanwhile, BMIT continued to reiterate its objective for market expansion beyond Malta as the company continues to look out for international opportunities. In recent past, the company has indicated such an international investment programme as one of its main strategic objectives. As such, this is one of the main developments that the investing public is eagerly awaiting in order to better gauge BMIT’s long-term business ambitions and potentially incremental returns to shareholders in due course. 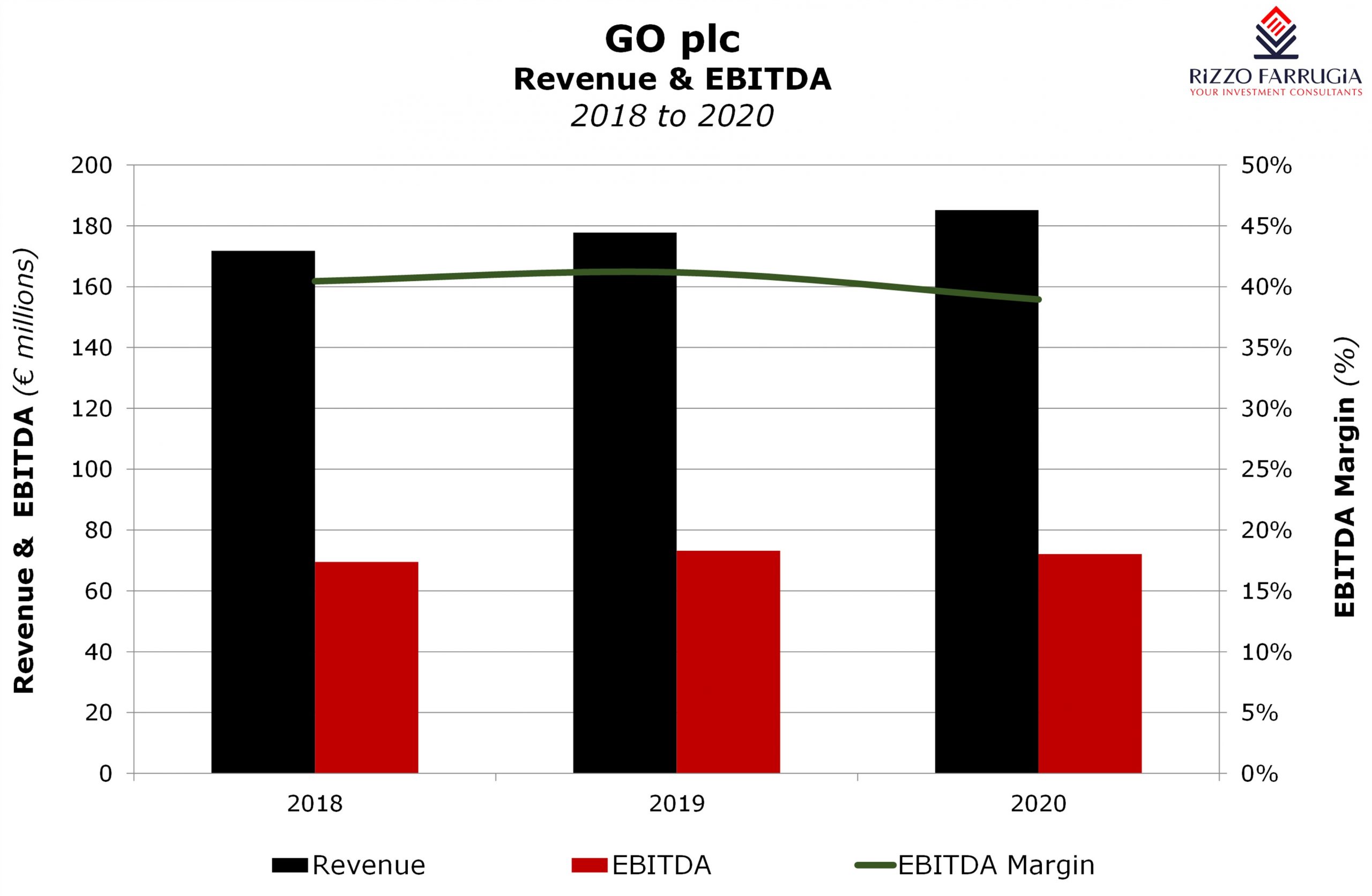 Meanwhile, the Cypriot-subsidiary Cablenet Communication Systems plc saw a 10.5% increase in revenue to €25.6 million accounting for 27.3% of Group revenue. As indicated earlier, BMIT Technologies experienced a revenue growth of 9.4% and this subsidiary accounted for 12.7% of overall Group revenue.

The consolidated EBITDA of the GO Group eased by 1.9% during the first half of 2021 to €34.8 million as the improved profitability by the Malta telecoms segment and BMIT was offset by the widening operating loss of Cablenet mainly in view of the considerable investments being made for the setting up, launch, and operation of the new mobile service in Cyprus through a RAN sharing agreement with ‘CYTA’. The GO Group EBITDA margin contracted to 37.1% compared to 38.8% in the first half of 2020.

Possibly the major surprise within the announcement issued by GO last Monday was the decision to declare a net interim dividend of €0.07 per share payable by the end of August. This is the first time since 2007 that GO will be distributing an interim dividend.

Following the publication of the financial statements of both BMIT and GO in recent days, the executive management teams of both companies should reach out to the investing community to explain the key highlights of their interim financial performance and delve into the strategic initiatives being undertaken to grow their business further.

A more detailed overview would also need to be given on the contingent liability disclosed in the note to the financial statements of GO plc wherein it was indicated that the Directors of GO were made aware of potential irregularities in relation to a subsidiary’s participation in certain EU-funded projects. This relates to Cablenet Communications Systems plc since a similar note was also included in the financial statements of the Cypriot company last Friday in which it was also noted that the amounts disbursed by the EU to Cablenet between 2017 and 2020 total circa €608,000.

Since the start of the pandemic, there has been a clear distinction between those companies whose revenues were materially impacted and had to suspend dividend payments and those companies that are more resilient and could afford to maintain and grow dividend distributions. The interim reporting season continues to highlight these major distinctions and investors need to take due considerations of these important trends within the context of allocations within their investment portfolios.