The series of articles published throughout the month of October and early November on the companies whose bonds are listed on the Regulated Main Market of the Malta Stock Exchange continues today with a review of the two companies within the oil and gas sector, namely Mediterranean Maritime Hub Finance plc and Medserv plc.

Mediterranean Maritime Hub Finance plc is the financing arm of MMH Holdings Limited which in turn is engaged in the provision of services supporting the oil and gas industry, as well as other maritime services. MMH Holdings is the guarantor of the bonds and was formerly called Ablecare Oilfield Services Holdings Limited. Mediterranean Maritime Hub Finance plc had issued a €15 million bond in September 2016 in order to partially finance the start of the redevelopment of the site previously occupied by the Malta Shipbuilding. In January 2015, the Group had been selected as the preferred bidder for the concession that was awarded by the Government of Malta to rehabilitate the 169,000 sqm site which was rebranded the Mediterranean Maritime Hub. In fact, on 1 August 2016, MMH Holdings entered into a contractual deed with Malta Industrial Parks Ltd for the 65-year emphyteutical concession of the large site formerly occupied by Malta Shipyards Ltd. The conversion of the site into the Mediterranean Maritime Hub entailed an investment of approximately €55 million spread over three phases. The proceeds from the bonds were in the main earmarked to commence the redevelopment of the hub with €6.5 million required for carrying out dredging works of the inner sea area adjacent to the hub; €3.45 million for carrying out infrastructural improvements at the hub and €3 million for the acquisition of plant and machinery as well as other investments related to the redevelopment of the hub.

The Group registered an improved financial performance during 2019 with revenues rising by 19.9% to €17.4 million, gross profit reaching €2.7 million and EBITDA amounting to €2.6 million compared to just €0.78 million in the 2018 financial year. The improved performance was however boosted by the compensation received from the Government amounting to €2.7 million relating to the road works and consequent disruption to the Group’s original business plan. This was partially set-off by an occupational fee of circa €1 million for use of the property. The interest cover improved to 2.5 times in 2019 from 0.9 times in 2018, and the net debt to EBITDA multiple dropped substantially to 8.2 times from over 20 times in the previous financial year.

The Financial Analysis Summary published on 25 June 2020 indicates that revenue during 2020 is expected to decline by €7.5 million to €9.9 million, equivalent to a drop of 43.2%. The considerable contraction in business is a result of the negative impact brought about by the COVID-19 pandemic which is expected to shrink the gross profit to €1.7 million. EBITDA is anticipated to amount to €1.1 million which will enable the Group to register an interest cover of just above 1 times.

In view of the sharp drop in EBITDA, the net debt to EBITDA is expected to deteriorate significantly to 19.4 times. The net debt of MMH Holdings is expected to remain largely unchanged during 2020 at circa €21 million. In view of the decline in the equity base as a result of the overall loss of €1.09 million anticipated to be incurred during 2020, the gearing ratio will deteriorate to 86.9% from 83.5% as at the end of 2019. The report published in June however highlights the fact that the cash flow forecast presented by the Group shows that sufficient cash from operations will be generated throughout 2020 to enable the Group to meet its financial commitments. 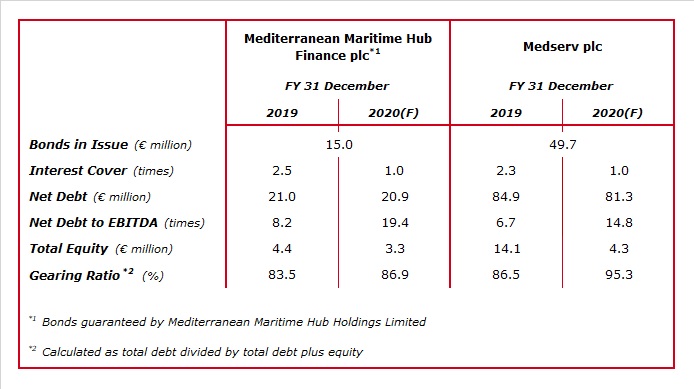 The financial performance of Medserv plc is also being heavily impacted by the COVID-19 pandemic with overall revenues anticipated to reach €27.1 million in 2020 compared to a record of €68.7 million last year. This is also partly due to the fact that as was anticipated also prior to the outbreak of the pandemic, the sizeable contract in Suriname came to an end in December 2019. During 2019, the Suriname contract generated overall revenue of €30.5 million.

EBITDA is expected to amount to €5.5 million which translates into a contraction of 57% over FY2019 resulting in an interest cover of 1 compared to 2.3 times in 2019.

The projected net debt to EBITDA multiple is expected to worsen to 14.8 times compared to 6.7 times in 2019. This is of concern to bondholders given the bonds are due to mature in 2023 and 2026.

Medserv is anticipating that by mid-2021, the company should return to pre-COVID-19 trading levels since a number of projects on which the Group is contracted will resume activities. The company highlighted in its most recent announcement that the business pipeline remains strong as a result of a number of existing long-term contracts in Malta, Cyprus and Oman and other new contracts recently announced in Abu Dhabi, Malta and Libya.

In view of the excessive gearing level (expected to reach 95% by the end of 2020), the company noted in its most recent announcement that it continues to adopt a dual strategy, namely that of securing sustainable growth through its pipeline but also of strengthening its balance sheet. Medserv indicated that it is currently actively pursuing a number of options to secure this outcome. This should help to alleviate bondholder concerns.

It is evident that these two companies have among the highest gearing levels when compared to the other companies whose bonds are listed on the Regulated Main Market of the Malta Stock Exchange. In view of this, coupled with the very difficult conditions within the oil and gas sector in general (which is, in itself, a cyclical sector that is also highly susceptible to external forces), investors need to remain extremely vigilant on upcoming developments to gauge whether the operating performances of both companies can start to improve in 2021 and whether this would be sufficient for them to continue honouring their obligations to stakeholders.