Since the start of the interim reporting season just over two weeks ago, three retail banks were among the various companies that published their half-year results.

The financial performances of the three banks – namely APS Bank plc, Bank of Valletta plc and HSBC Bank Malta plc – were impacted by individual factors that swayed the overall results.

The APS Group results were dented by a material unrealised loss of €8.2 million emanating from adverse market movements across financial markets. In fact, when reviewing the bank results on a ‘solo basis’, profits after tax increased by 24% in the first half of the year to €9.27 million translating into a return on equity of 8%.

As expected, BOV’s performance was overshadowed by the recognition of the settlement of the Deiulemar litigation. In fact, the BOV Group reported a loss after tax of €51.1 million. However, excluding this extraordinary line item, BOV posted a profit before tax of €26.1 million (H1 2021: €25.9 million) on the back of a marked increase in lending activity as well as higher non-interest income.

HSBC Malta’s financial performance was boosted by a net impairment reversal of €11.8 million which helped the Group report a profit after tax of €15.5 million in H1 2022 (H1 2021: €11.4 million). On the other hand, HSBC reported a drop of 3.4% in operating income as the good growth registered in net fee and commission income as well as trading income was offset by the further contraction in net interest income.

Despite the varying factors affecting the overall performance, the common trend that emerged from these three results was the continued surge in deposits.

During the twelve-month period between June 2021 and June 2022, there was an increase of €1.8 billion in deposits across the three banks. Although this growth is impressive, on the other hand it should come as no surprise when seen in the context of the extraordinary increase in resident deposits recorded in recent years which practically doubled since 2013 to nearly €25 billion.

Overall, the continued surge in liquidity at the three largest retail banks might be seen as a positive development amid the more favourable interest rate environment across the eurozone as banks are no longer incurring charges (negative rates) when leaving excess deposits idle with the central bank. In fact, the recent decision by the European Central Bank to raise the deposit rate from -0.5% to zero as from 27 July 2022 will immediately result in a marked increase in net interest income for banks holding excess liquidity. The main beneficiaries are undoubtedly BOV and HSBC given the low loan-to-deposit ratios of these two credit institutions.

Moreover, this surge in deposits continues to highlight the high savings ratio across the local financial system which could be a key strength for the Maltese economy in the midst of the ongoing economic uncertainty following the war in Ukraine which resulted in a marked increase in inflation. Although the total amount of lending to residents increased from €8.5 billion in 2010 to just under €13 billion as at June 2022, the difference between resident deposits and lending increased drastically to almost €12 billion compared to €3 billion in 2010 which partly explains the extent of the robustness of certain economic activity especially across the property, retail, and leisure sectors. 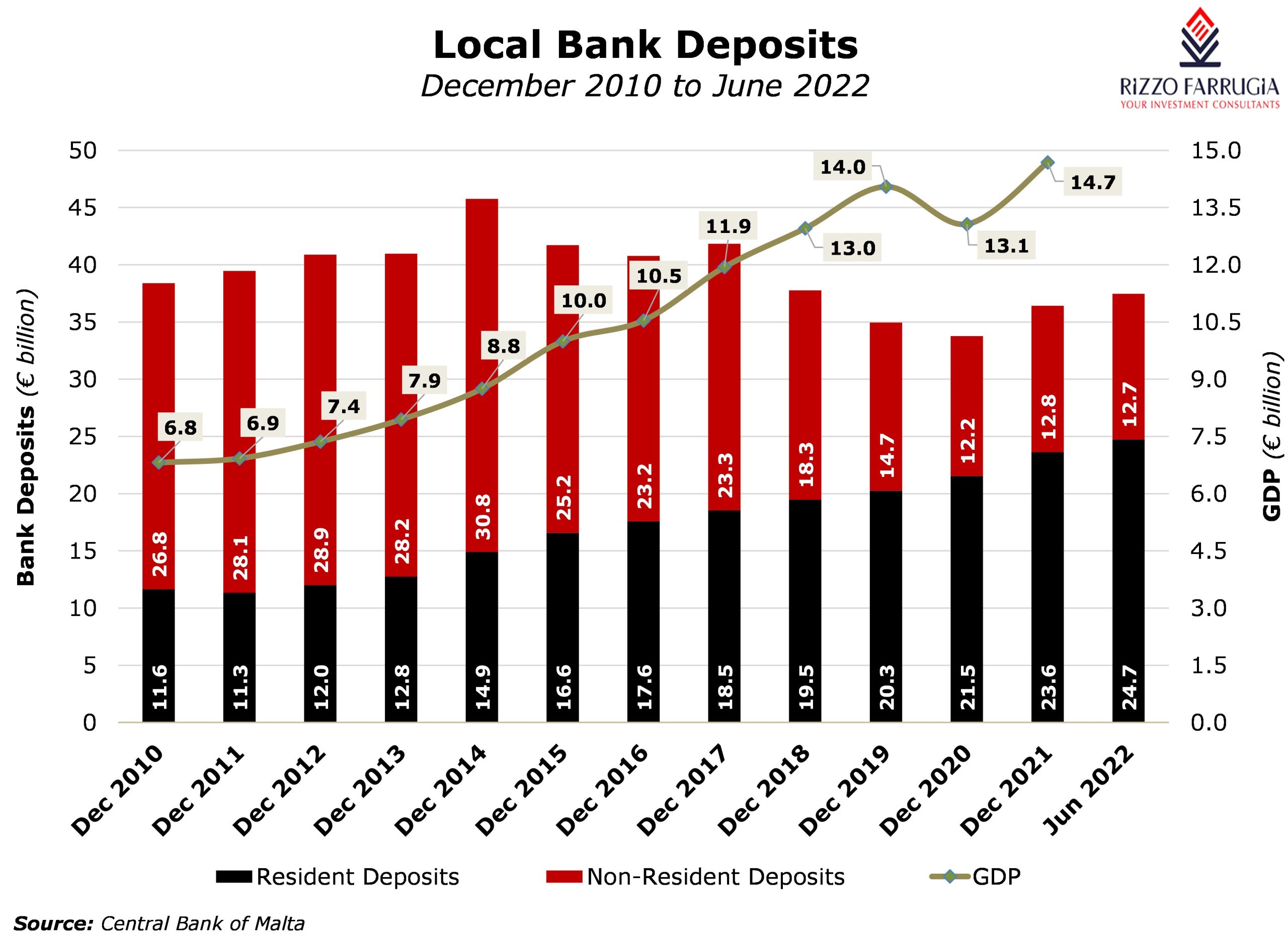 As indicated in my article in early June, while some banks are maintaining a high loan-to-deposit ratio, other banks are encountering more challenges to channel those deposits into customer loans and this liquidity may now be invested by the banks into higher yielding sovereign bonds following the marked shift in yields seen internationally as well as across Malta Government Stocks.

Alternatively, some of these deposits may also find their way into the capital market. This may have already started to take place and it may not be a coincidence that during the first half of 2022, trading activity across corporate bonds on the secondary market reached a record level of €56.3 million. In prior comparative periods, trading activity in the first half of the year was always below the €50 million level except in the first six months of 2020 when almost €56 million worth of bonds changed hands. The high level of activity two years ago was undoubtedly as a result of the increased level of concern by many investors during the start of the COVID-19 pandemic.

The increased investor participation on the secondary market for corporate bonds must also be seen in the context of the high level of new bond issues on the Regulated Main Market of the Malta Stock Exchange. Since the start of the year, a total of €336.6 million in bonds have been listed or are in the process of being listed after obtaining regulatory approval.

The high demand for corporate bonds, both on the primary as well as on the secondary market, that are listed on the Regulated Main Market of the Malta Stock Exchange is evidently providing a strong level of support and limiting the impact of adverse price movements seen internationally. This has led to a marked narrowing of spreads compared to Malta Government Stocks whose prices are more volatile as they mirror the movements across the eurozone sovereign bond market.

The less volatile nature of Maltese corporate bonds coupled with the consistent growth in deposits is providing a favourable background for new corporate bonds to continue to be admitted to the Regulated Main Market thereby enabling banks to direct customers to utilise the bond market as a means of earning higher rates of interests on idle liquidity.