The financial results published by Farsons two weeks ago cover the period when several restrictions for social activities in Malta were still in place. Moreover, additional requirements were imposed in July for travellers to Malta following the sharp increase in COVID-19 cases in early July which negatively impacted tourism arrivals. Notwithstanding these extraordinary challenges, Farsons still reported a notable rebound in business across all its three segments, namely ‘Brewing, Production and Sale of Branded Beers and Beverages’, ‘Importation, Wholesale and Retail of Food and Beverages’, and ‘Franchised Food Retailing’.

It is fair to mention that during the comparative period (i.e. between 1 February 2020 and 31 July 2020) there were also several highly restrictive measures imposed by the health authorities at the start of the pandemic which greatly impacted the performance of the Farsons Group as well as virtually all other companies dependent on tourism and social activities within the local economy. As such, during the first half of the 2020/21 financial year ended on 31 January 2021, the Farsons Group only had six weeks of what would be regarded as “normal” trading as the airport was closed between 21 March and 1 July 2020 together with restaurants, bars and night clubs. All mass events were also cancelled which therefore left a marked impact on all business segments of the Farsons Group at the start of the pandemic. In view of this very bleak comparative period, it is also worth measuring the rebound in business activity over the past six months against the pre-COVID environment during the first half of the 2019/20 financial year, i.e. between 1 February 2019 and 31 July 2019.

The main business segment of the group, namely the ‘Brewing, Production and Sale of Branded Beers and Beverages’ experienced a 7.1% increase in revenues (or +€1.55 million) to €23.4 million. However, this is still 18.9% lower than the turnover generated in the first half of FY2019/20. Sales within the ‘Importation, Wholesale and Retail of Food and Beverages’ arm climbed by 11.1% (or +€1.2 million) to just under €12 million (24% lower than the corresponding period pre-pandemic) while the revenue generated from the ‘Franchised Food Retailing’ business rebounded by 50% (or +€2.09 million) from last year to €6.28 million (27.6% lower than the record of €8.67 million achieved in H1 2019/20).

As a result of the evident recovery in business performance over the past six months, the profitability and margins also improved considerably from the weak figures last year and also compare relatively well to the pre-COVID business period.

As with several companies locally, and also in line with many companies internationally that were impacted sharply by the pandemic, Farsons had halted dividend distributions to shareholders in early 2020 in order to preserve cash resources until such time as further clarity on the effects of the pandemic became more evident. 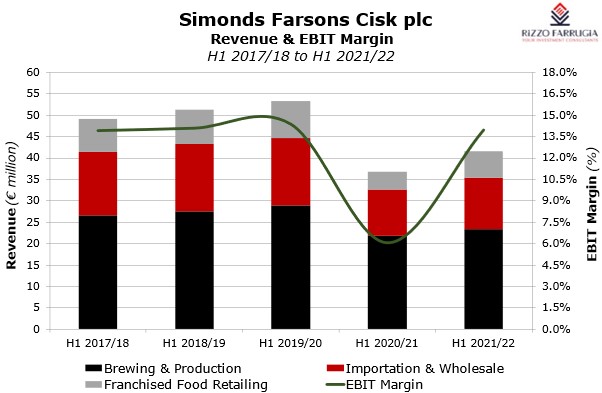 At the time of the publication of the 2020/21 Annual Report in May 2021, Farsons had noted that the declaration of an interim dividend for the current financial year will be considered once the interim financial results are published as the group would have a better indication of the performance of its business during the important summer season. On 29 September 2021, Farsons resumed its dividend distributions as it declared a €1.5 million interim dividend which will be paid on 20 October 2021. More importantly however is the statement of confidence made by the Directors that should business conditions continue to improve, another interim dividend may be declared before the end of the 2021 calendar year.

This would not be surprising giving the overall strength of the balance sheet of the Farsons Group and the indications that the group is well placed to achieve the financial targets published in the Financial Analysis Summary in July 2021 with revenues of €91.7 million; EBITDA of €19.3 million and a pre-tax profit of almost €10 million. As reported in last week’s article, the group has a very strong debt to asset ratio which is projected to amount to 0.20 times during the current financial year to 31 January 2022 with total debt of €38.9 million and total assets of just under €197 million. Moreover, the projected net debt to EBITDA multiple for the current financial year of only 1.22 times indicates that the group can repay its projected net debt of €23.6 million in under one-and-a-half years of operating profits which is indeed an enviable credit metric even by international standards.

Prior to the pandemic, the Farsons Group adopted a fairly conservative dividend policy with a payout ratio in the region of circa 26% with €4 million in dividends distributed in respect of the financial year to 31 January 2019. Although the group has considerable continuous requirements for ongoing capital expenditure related to its operations, product development and export initiatives which remains an important area of focus for the long-term growth ambitions of the group, in my view, a more aggressive dividend payout can be considered favourably in due course on the back of its robust financial position and strong market presence. This would definitely be well-received by the investing public.

Although the interim results published by Farsons cover the period until July, there are evident signs of the economic recovery materialising from the sharp setback suffered during the initial stages of the pandemic when highly restrictive measures were in force. In fact, Farsons reported that it “is cautiously optimistic that the gradual recovery of the food and beverage market for the local and tourism sectors currently being experienced will be sustained”. This is corroborated by the traffic results published by Malta International Airport plc with significant growth registered during the months of August and September compared to the June and July figures albeit they are still well-below the corresponding figures registered prior to the start of the pandemic in early 2020.

As the economic recovery continues to gather momentum in the weeks and months ahead, it would be expected that other companies follow the procedure of Farsons and restart dividend distributions to shareholders. This would be a very important development for retail investor sentiment especially at a time when new investment opportunities are being made available across both the bond market as well as the equity market.