In recent weeks, I published articles on the performance of equity markets as well as currency movements during the pandemic. Apart from equities, bonds and currencies, some investors also maintain an exposure to commodities in their investment portfolios. Gold is generally one of the most common commodities held by investors mainly due to its ‘safe-haven’ status in times of uncertainty. The price of gold grabbed the headlines in recent weeks as a result of its strong upturn and also in view of the ongoing debate on whether the price could continue to hike in the months ahead.

Indeed, the price of gold has risen by over 27% since the start of the year, by far surpassing the return posted by the Nasdaq Composite which has been among the best performing equity indices so far in 2020. Notwithstanding its perception as the principal ‘safe-haven’ asset especially during times of extreme market volatility and economic distress, the price of gold had dropped markedly at the start of the pandemic during the first half of March 2020. In fact, the price of gold dropped by over 12% in a matter of ten days to USD1,471 an ounce during the second and third week of March 2020 with many commentators claiming that investors liquidated various assets including gold to shore up cash holdings in view of the uncertainty caused by the pandemic. Earlier on in the year, gold had climbed to the USD1,680 level following an impressive upsurge of 43% that had started in mid-August 2018. After touching a low of USD1,471 towards the end of March 2020, investor sentiment across international financial markets improved markedly as all major central banks and governments across the world unleashed unprecedented amounts of fiscal and monetary support. This led the price of gold to recover strongly also breaking the important physiological level of USD1,800 an ounce and continued surging to new record levels earlier this week. On Monday, the price of gold climbed over 2% to a high of USD1,945.26, thereby surpassing the previous all-time high of USD1,921.11 in early September 2011.

At times, it is very difficult to explain the daily movements in the price of gold. However, most financial analysts attribute a common set of factors that determine the price of the yellow metal. Apart from general demand and supply dynamics, the other major factors affecting gold are inflation and interest rate expectations, overall investor sentiment and appetite for risk, global economic growth projections as well as the relative strength or weakness of the US Dollar against major currencies. Since the US Dollar serves as the benchmark pricing mechanism for gold, a decline in the value of the US Dollar generally translates into a corresponding increase in the price of gold. Gold and the US Dollar thus mainly follow an inverse relationship and the recent rally in the price of gold also reflects the sudden decline in the value of the US Dollar which eased to USD1.17 against the euro compared to a level of USD1.07 in March 2020. Gold tends to benefit from widespread stimulus measures by central banks since it is widely viewed as a hedge against inflation. In recent weeks, higher inflation expectations have pushed US long-term real rates to new lows also helping the rally in the price of gold.

Despite being widely considered as one of the world’s oldest store of value, it is worth highlighting the views of another school of thought most often advocated by proponents of value investing. Possibly one of the most vociferous has been the legendary investor Warren Buffett who, on more than one occasion, has been critical of how investors perceive value in gold rather than assesses its intrinsic value. Although in one of his most famous quotes penned in the 2016 letter to Berkshire Hathaway shareholders, Buffett alludes that gold is precious – “every decade or so, dark clouds will fill the economic skies, and they will briefly rain gold” – on the other hand, he has consistently expressed his lack of sympathy to “the magical metal” as it is “no match for the American mettle”, is “neither of much use nor procreative” and even calls it a “sterile asset”.

In his 2011 letter to shareholders published in February 2012, Buffett was prophetic in his unorthodox views on gold. A few months earlier in early September 2011, the price of gold had exceeded the USD1,900 level after surging by 170% following a 30% slump in an eight-month period between mid-March and mid-November 2008. However, between the latter part of 2011 and the end of 2015, the price of gold skidded by 45% to around the USD1,000 level, in part possibly reflecting the inaction by the Federal Reserve over interest rates which were left close to zero during that period. 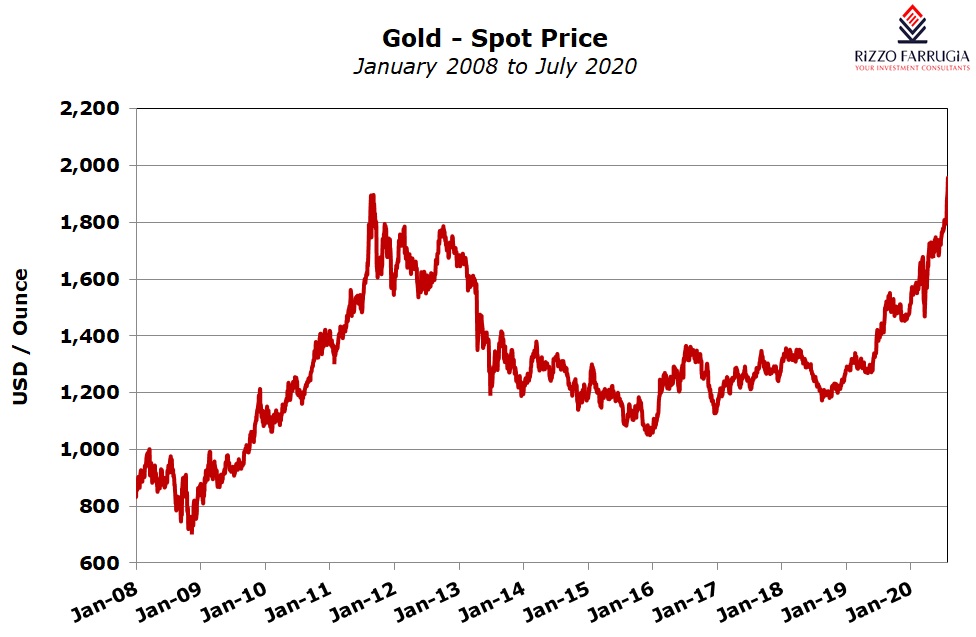 At the time, Buffett had come out with a very interesting narrative as a basis for his typical dislike to gold. He took two hypothetical scenarios – ‘A’ and ‘B’ – wherein in ‘A’, all the world’s gold is melted and a huge 170,000-ton cube having a market value of USD9.6 trillion is created. On the other hand, in scenario ‘B’, Buffett takes the same amount of money (i.e. USD9.6 trillion) and buys all the cropland in the US plus the equivalent of 16 Exxon Mobils (at the time, Exxon Mobil was the world’s most profitable company). From his analysis, Buffett concludes that a century from that date, the farmland “will have produced staggering amounts of corn, wheat, cotton, and other crops – and will continue to produce that valuable bounty, whatever the currency may be. Exxon Mobil will probably have delivered trillions of dollars in dividends to its owners and will also hold assets worth many more trillions …. The 170,000 tons of gold will be unchanged in size and still incapable of producing anything. You can fondle the cube, but it will not respond.”

With the price of gold rising for seven consecutive weeks and now having surpassed the USD1,900 level to a new all-time high, various financial analysts have been commenting on the expected price movements in the months ahead. Several value investors remain firm in their beliefs about the unattractiveness of gold while others see the price of the yellow metal reach fresh record levels. One of the most bullish estimates was published by a leading US bank claiming that the price for gold is forecast to reach USD3,000 per ounce over the next 18 months on the back of the ultra-loose fiscal and monetary policies around the globe, as well as the huge amounts of idle cash awaiting to be invested (including those held by retail and non-professional investors). Others, such as a particular Wall Street veteran, take a more cautious approach towards gold. Whilst acknowledging that the commodity is providing useful diversification in current market conditions, this commentator notes that what might happen in the months ahead remains highly uncertain due to the significant impact that demand from global Exchange Traded Funds has on gold prices in general. Furthermore, according to a widely used ratio that tracks the S&P 500 index to the price of gold, the latter seems to be fairly priced when considering that today’s multiple of 1.7 times (meaning that it takes 1,700 ounces to buy the S&P 500) is very close to the long run average of 1.6 times. However, it is much lower that the historic peak of over 5 times which was recorded at the time of the outburst of the dot-com bubble at the turn of the 21st century.

Whether or not the price of gold will continue to perform strongly in the coming months similar to its performance following the 2008 global financial crisis is highly debatable. Although value investors may continue shunning the yellow metal based on conventional investment theories, on the other hand, gold’s unique characteristics are likely to lead to continued support given growing fears of stagflation in various parts of the world. Stagflation is the combination of slow economic growth along with high unemployment and high inflation which would lead to continued loose monetary policy by the major central banks eroding the value of fixed-income investments. The unprecedented circumstances in the months ahead are very likely to continue to help gold grab the headlines across international financial markets and impact other asset classes since sharp price movements in gold send important signals about the state of the global economy.