Earlier this week, International Hotel Investments plc published a prospectus in connection with an €80 million 10-year bond issue at an interest rate of 3.65% per annum.

This jointly ranks as the largest-ever corporate bond in Malta together with the debt funding issued by Hili Finance Company plc in July 2019 mainly to finance the acquisition of the Comino hotel and bungalows.

The bond issue is conditional on a total fund raise of €50 million. Within the prospectus the company naturally discloses the use of proceeds and ranks these in order of priority.

Apart from the €20 million refinancing exercise, an amount of €9 million will be required to finance obligations arising under the preliminary long-term lease agreement pertaining to the Corinthia Hotel Rome. IHI will be managing the conversion and renovation of the property (owned by the global property investors Reuben Brothers) into a 60-room hotel operating under the Corinthia brand which is expected to open for business in 2023.

Likewise, an amount of €8 million is required for the partial financing of a premium payable under the long-term management contract for the Corinthia Hotel New York. Similar to the Corinthia Hotel Rome, this landmark property is also owned by Reuben Brothers and is set to undergo an extensive refurbishment prior to reopening in early 2023. Once renovated, IHI will operate the hotel which will have 97 guest rooms as well as 12 luxury residences located in one of the most prestigious and exclusive areas in Manhattan.

Meanwhile, IHI is also raising a total of €14 million for the partial financing of preparatory works at the Hal-Ferh Site (branded ‘Corinthia Oasis’) which is adjacent to the large site in close proximity to the Golden Sands resort. The preparatory works include excavation, demolition and development of a car park.

Moreover, €20 million is being earmarked to finance the soft refurbishment of the Corinthia Palace Hotel & Spa (€5 million) and the Corinthia Hotel St. George’s Bay (€15 million) while the remaining €8.2 million will be used for ‘general corporate funding purposes of IHI’.

The hospitality sector was one of the worst hit sectors globally from the COVID-19 pandemic. As a result of the severe restrictions across most worldwide economies, travel and tourism came to an abrupt halt in Q1 2020 leading to a severe downturn across the hospitality and other related sectors.

Naturally, the financial impact on the IHI Group was similar to that of many operators within the hospitality sector. In 2020, IHI’s overall revenue declined to €91.9 million compared to €268.3 million in 2019, with the EBITDA shrinking from a positive record level of €69.8 million in 2019 to a negative €3.75 million. The weak financial performance continued during the first half of 2021 as several restrictions were maintained in most economies worldwide since the vaccine rollout only began gathering strong momentum during the second quarter of this year. In fact, during H1 2021 overall revenues of €34.6 million represented a drop of 33% over the previous comparable period reflecting the full impact of the pandemic following the outbreak of COVID-19 in Europe in mid-March 2020. However, in view of the various cost control measures taken in 2020 as well as Government support schemes covering payroll and other forms of subsidies/support in several countries in which IHI operates, the EBITDA improved to a negative €0.83 million compared to a negative figure of €2.13 million in the first half of 2020.

In line with its obligations as a corporate bond issuer, IHI had published its 2021 financial projections in June 2021 showing revenues which were expected to increase by 27.1% this year to €116.8 million reflecting a rebound in activity following the material slump in business in 2020. IHI had predicted in June 2021 that its year-end EBITDA will amount to a positive €11 million compared to the negative figure of €3.75 million recorded in 2020.

In the Prospectus published earlier this week, IHI issued updated financial projections for 2021 as well as for 2022. While the projected revenue figure for 2021 is largely unchanged at €116 million, IHI is now expecting EBITDA to improve further to a positive €15.1 million presumably on account of the payment of USD5 million received by IHI’s fully-owned subsidiary Corinthia Hotels Limited. A few weeks ago, IHI had announced the termination of the technical services and pre-opening services agreement with Meydan Group of Dubai in respect of the Jumeirah Beach Residence in Dubai.

The 2022 financial forecasts indicate that IHI is projecting a sharp recovery in revenue to €232 million which however would still represent a 13% decline from the record revenue of €268 million in 2019. In line with the expected rebound in revenue as a result of the recovery across the global hospitality sector worldwide following the evident effectiveness of the vaccines as is evident since August even across the Maltese hospitality sector, IHI in anticipating a sharp recovery in EBITDA for 2022 to €54.8 million. Despite the sharp rebound from the negative EBITDA in 2020, the figure projected for 2022 would still be 21.4% below the record level achieved in 2019. 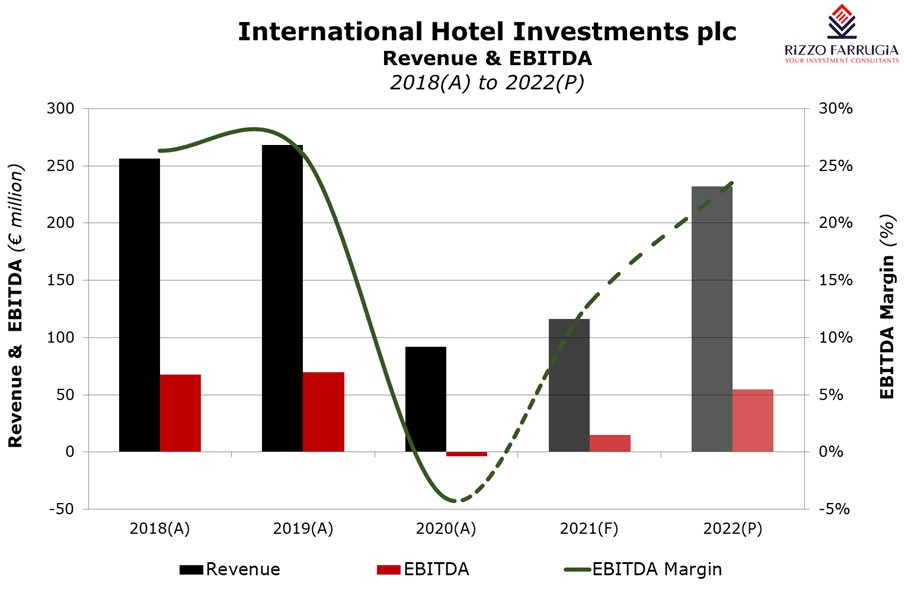 Within the section of ‘Risk Factors’ in the IHI prospectus, there is clear reference to the impact of COVID-19 and how the pandemic could strongly influence the pace and timing of the Group’s recovery and growth initiatives. IHI clearly stated that “during this period of uncertainty, the Group’s principal goal is to preserve its liquidity position. As such, should the current environment prolong beyond the Group’s expectations, the Group’s current development pipeline may not be completed and developed within already determined timeframes. In addition, the Group may need to postpone or cancel planned renovations or developments, which could adversely impact the Group’s business”.

This is an important statement in the context of the use of proceeds highlighted earlier on, namely the preparatory works at the Corinthia Oasis as well as the refurbishment plans for two of the other Malta properties.

In view of the ongoing uncertainties related to the strength of recovery across the hospitality sector and the impact this will have on IHI’s financial performance, in my view this calls for more regular communication to the market to ensure that all stakeholders are kept well-abreast of developments. As I regularly outlined in some articles in the past, an interim statement is issued by several companies across international markets during the months of October and November to provide an update on the Q3 financial performance. Moreover, in the UK for example, a ‘pre-close trading update’ is published in January to disclose key trends as at year-end ahead of the publication of the annual financial statements. This communication strategy needs to be adopted by all companies in Malta especially those whose business has been significantly impacted by COVID-19.

In the case of IHI, this level of communication is even more important in the context of the uneven recovery across the hospitality sector that may materialise in 2022 and beyond. In fact, the IHI prospectus notes that any delay in timing of the recovery “may result in a situation where the Group may require additional short to medium term funding to meet its working capital and debt service obligations”. IHI however rightly states that it has a long and positive track record in terms of negotiation with banks and other financial institutions to acquire or renew financing facilities and it also has the ongoing support of its principal shareholders, particularly that of its majority shareholder Corinthia Palace Hotel Company Limited.

Apart from the requirement to plan the upcoming investment pipeline with a strict focus on the recovery across the Group’s hotel portfolio, IHI also reiterated that its strategic plan “also comprises the divestment of assets located in secondary markets that have achieved their mature stage of development”. This plan to sell one or more of its properties had already been highlighted prior to the outbreak of the pandemic. Indeed, in the Interim Directors’ Statement published in early November 2019, IHI had explained that an international marketing exercise was being conducted for the sale of the Prague hotel which had a carrying value of €93.6 million on the balance sheet as at December 2020. Meanwhile earlier this year, IHI also sold the penthouse in London for €35.7 million (in line with book value) and the sale proceeds were principally used for the repayment of bank borrowings.

There is clearly the need for IHI to action its divestment programme at the opportune time to prove to the investing public that the strategy adopted since its IPO in the year 2000 starts to yield the desired results of achieving capital growth on property acquisitions over the years.

Moreover, the sale of the Prague property and potentially others in due course will not only help to shore up IHI’s cash resources should the hospitality sector take longer than expected to recover, but it will also enable IHI to fully finance other upcoming developments such as the Corinthia Oasis without taking on additional borrowings.