IZI Finance plc obtained regulatory approval last week for a €30 million unsecured bond issue carrying a coupon of 4.25% per annum and maturing in 2029.

Although this is IZI’s first fund raise on the Malta Stock Exchange, and therefore most investors might not be so familiar with the company’s name and business activities, the Group has been in operation for several years. In fact, IZI has been a majority shareholder of the operator of the Dragonara Casino since June 2010. Moreover, the Group has a network of 36 high street stores (branded ‘IZIBET’) through which it offers electronic gaming machines (EGMs) and retail sports betting (including virtual sports and e-sports) apart from operating the largest bingo hall in Malta which is located in Bugibba.

However, the more important development for the Group and one of the major reasons for the new bond issue is the recent successful tender for a 10-year concession agreement with the Government of Malta for the exclusive operation of the National Lottery as from early July 2022. The National Lottery has been operated by Maltco Lotteries Ltd since privatisation in 2004, and its product portfolio goes beyond the highly popular ‘Grand Lottery’, ‘Lotto’, and ‘Super 5’ as it includes other business such as monitor games, instant scratch cards, sports betting, as well as EGMs.

A total of €16.2 million from the bonds proceeds will be used for capital expenditure related to the National Lottery concession in various areas such as the installation of hardware, terminals and systems; the development of lottery software systems and back-office applications as well as the modernisation and upgrading of the distribution network amongst others. This shows the huge commitment that has been undertaken by the Group to significantly increase its presence in the land-based gaming market. Indeed, it is estimated that following the takeover of the National Lottery, IZI will have a total market share of circa 60% of the land-based gaming sector in Malta which generated aggregate revenues of €107 million in 2019.

The Group will also be utilising €8.5 million from the bond proceeds for investments related to the Dragonara Casino concession, including upgrades to the casino management system and other software developments; external and internal improvements to the landmark building; as well as the purchase and maintenance of equipment related to slot machines and gaming tables.

Meanwhile, most of the remaining proceeds from the bond issue are earmarked for capital expenditure related to the Group’s retail gaming operations, including the purchase of new gaming equipment and the refurbishment of IZI’s existing retail outlets.

The 10-year concession for the operation of the National Lottery is a very important milestone for IZI as it will enable it to enter in a new business vertical with considerable growth potential and economies of scale especially when combined with the Group’s existing network of retail outlets. Although the Prospectus only includes one year of financial projections after IZI takes on the concession of the National Lottery as from 5 July 2022, it is estimated that the National Lottery will contribute the majority of the Group’s operating profits as from the upcoming financial year commencing 1 July 2022. Indeed, IZI is expecting to generate revenues of €82.3 million and an EBITDA of €21.7 million in FY2023 compared to the forecasted figures of €28.4 million and €5.14 million respectively for the current financial year ending 30 June 2022.

The Group’s profits below the EBITDA line are also expected to improve markedly following the take-over of the National Lottery. In fact, IZI is projecting an operating profit (“EBIT”) of €3.63 million and a net profit of €1.65 million in FY2023 compared to the estimated EBIT of €0.32 million and net loss of just under €1 million in FY2022. The material difference in accounting profits depicted between the EBITDA line item and EBIT/net income in the financial statements is mostly due to the high level of depreciation charges related to the reinvestments needs of the Group (which are expected to increase significantly in the foreseeable future) as well as the huge amortisation charges related to the concessions for the operation of the Dragonara Casino and the National Lottery over a period of ten years. As such, these ‘non-cash’ accounting entries have an adverse impact on the yearly profits recorded by the Group and do not truly reflect the expected strong cash build-up ahead of the redemption of the bond in 2029. 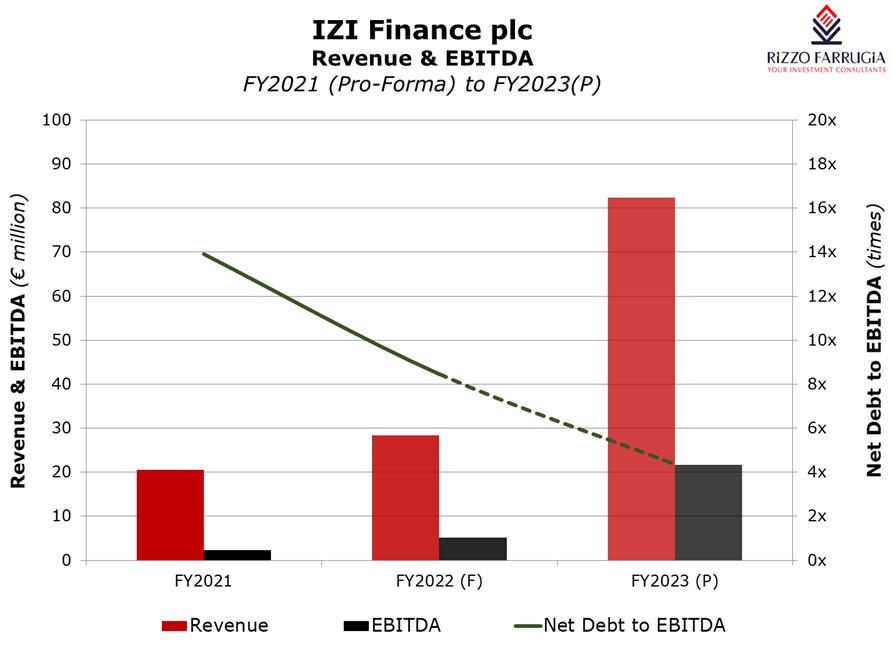 Based on the financial projections for the 2022/23 financial year, IZI will have an interest cover of 4.5 times whilst the projected net cash flows from operating activities of €20.2 million is almost 6 times the interest costs of €3.42 million. Moreover, despite the projected significant increase in indebtedness to over €100 million in FY2023 (compared to €32.5 million as at 30 June 2021), the estimated net debt to EBITDA multiple of 4.37 times essentially means that it will only take a little more than four years for the Group to pay back its debt from cash earnings assuming that these remain constant in future years.

Although no financial projections in the Prospectus are available beyond June 2023, IZI’s management has indicated that it expects the Group to generate an average EBITDA of around €29 million annually over the course of the next ten years. The EBITDA contribution from the Dragonara Casino and the ‘IZIBET’ retail operations is expected to increase to an average of circa €8 million per annum compared to €5.8 million prior to the outbreak of the pandemic on the back of the planned investments amounting to over €12 million. Moreover, the EBITDA contribution from the National Lottery is projected at an average of almost €21 million per annum over the next ten years indicating the importance of the concession agreement to the fortunes of the entire IZI Group.

While IZI’s financial targets seem ambitious, they are based on the execution of a well-defined strategy spread over a number of years that is centred around a sizeable investment programme aimed at strengthening the Group’s retail and distribution network, rationalising and improving its product mix.

More specifically for the National Lottery, IZI will be introducing EGMs across a number of outlets; extend the opening hours of all National Lottery stores; increase the frequency of the draws for ‘Super 5’ and ‘Lotto’ to a bi-weekly schedule; and strengthen the distribution network through a wider and stronger sales force including the introduction of a tiered distribution network for instant scratch cards which will also go through a major marketing and product overhaul. Moreover, IZI intends to extend and integrate the ‘IZIBET’ suite of sports betting products across the entire lottery agent distribution network with a view of maximising synergies and cross-selling opportunities including the use of self-service betting terminals and the retail mobile app, as well as the inclusion of French horse racing.

The gaming sector has often been labelled as a ‘high risk’ economic activity and is thus heavily scrutinised in terms of regulatory, anti-financial crime and compliance obligations. However, it is important to distinguish between the various segments within the industry and the track record of the various operators. The land-based market represents the more traditional and long-standing element of the broader gaming sector and its dynamics are very different to other segments which focus on the international online aspect of the business.