Last week, the Central Bank of Malta (CBM) published the 13th edition of the Financial Stability Report (FSR) which reviews and assesses the financial conditions and developments of the financial system in Malta. The report basically evaluates the resilience of the local financial system and identifies sources of potential systemic risk.

The Financial Stability Report is generally published annually in August followed by a mid-yearly update in December. This year’s annual report was published slightly earlier than usual. In my opinion, the annual Financial Stability Report should be reviewed by all investors across the Maltese capital market due to the importance of the strength of the financial system to any economy and its capital market.

Since the latest report published last week covers 2020 which coincides with the severe impact to the local economy as a result of the pandemic, a review of the main findings becomes even more critical this year. In fact, in the 12th edition of the report published in August 2020, it was stated that “the COVID-19 pandemic poses the biggest test to the resilience of the Maltese financial system since the Great Financial Crisis”.

The CBM continues to classify APS Bank plc, Bank of Valletta plc, BNF Bank plc, HSBC Bank Malta plc, Lombard Bank Malta plc, and MeDirect Bank (Malta) plc as the 6 core domestic banks. Following the maiden bond issue by APS Bank plc during Q4 2020, all these banks with the exception of BNF Bank plc have securities listed on the Malta Stock Exchange and in view of this, today’s article will focus solely on the key findings within the report with respect to the core domestic banks.

In line with the expectations at the start of the pandemic, the developments during 2020 left a significant impact on the profitability levels of the core domestic banks following the sharp increase in net impairment charges (which rose from only €0.5 million in 2019 to over €150 million by the end of 2020) together with lower gross income. As a result, aggregate pre-tax profits of the core domestic banks dropped to a mere €5.5 million in 2020 compared to almost €200 million the previous year. This naturally impacted the profitability ratios normally used across the sector such as the return on equity and return on assets.

In turn, this also resulted in a deterioration of the operational cost-to-income ratio by 2.0 percentage points to 68.2% in 2020 which is higher than the EU average of about 65%.

Despite the economic downturn, the balance sheets of the core domestic banks grew by 4.2% to €25.7 billion equivalent to just over 200% of Malta’s Gross Domestic Product (GDP).

Customer loans continued to remain the largest asset component of the balance sheets of the core domestic banks accounting for 48.2% of total assets. The report explains that the continued expansion in the loan book of the core domestic banks was largely driven by mortgages whose growth however moderated in 2020 compared to the above-average growth in prior years. Resident mortgages grew by 6.6% in 2020 compared to the 10.3% rise recorded in 2019. However, the FSR also highlights that the main area in growth in assets was primarily driven by higher holdings of government debt securities which rose by almost 20% to 14.5% of total assets reflecting “opportunities for banks to employ excess liquidity to purchase debt issued by Government as it sought to finance COVID-19 support measures”. In fact, the Government of Malta issued a record amount of Malta Government Stocks in 2020 totalling €1.34 billion which were all directed towards institutional investors.

Customer deposits remained the main funding source for the core domestic banks, financing almost 83% of their balance sheet. Customer deposits grew by 6.6% to a total of €21.5 billion compared to the 3.8% growth in 2019 largely on the back of higher demand deposits which rose by 10.3% while fixed-term deposits continued to decline. The report indicates that during the initial stages of the pandemic, household deposits picked up momentum as households stepped up their savings possibly also for precautionary reasons while there was also a contraction in consumption. 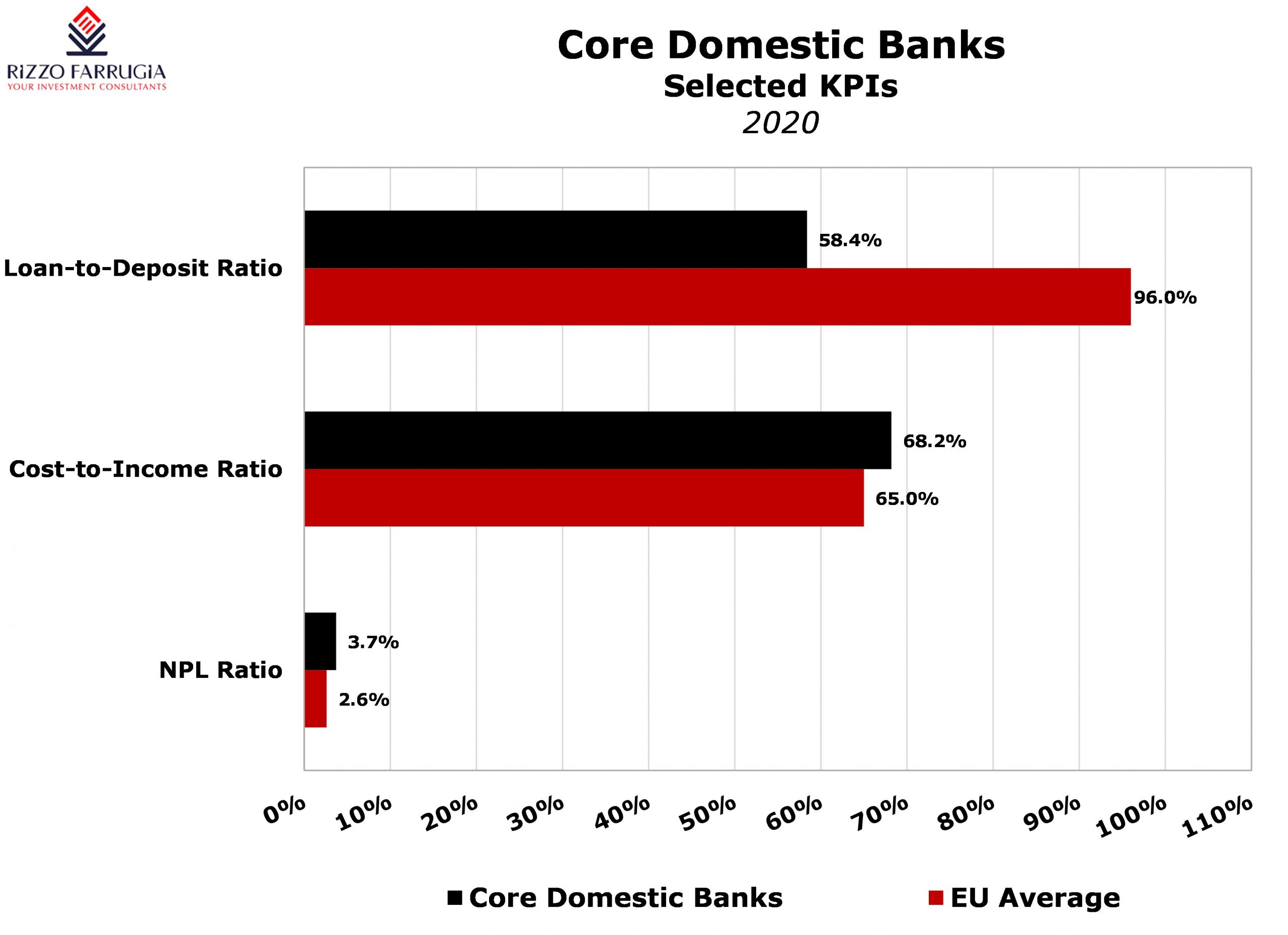 As highlighted in the 2019 report, the six core domestic banks entered the pandemic with healthy capital ratios, which continued to strengthen in 2020. In fact, the Tier 1 capital ratio improved to 18.5%.

In essence, the FSR found that the Maltese financial system remained resilient to the unprecedented economic shock brought about by the pandemic. The strong capital and liquidity positions of the Maltese banks, coupled with their prudent business models, enabled these institutions to support households and businesses withstand the effects of the pandemic.

The interim financial reporting season for those companies whose financial year-end is December commences next week and three of the core domestic banks (namely APS Bank plc, Bank of Valletta plc and HSBC Bank Malta plc) will be issuing their half-year financial statements between 29 July and 2 August. Although some weeks ago these three banks all provided detailed information about their performance in Q1 2021, the interim results will be closely monitored to understand the dynamics across the banking sector and also other sectors of the economy which are inherently suffering from the ongoing impact of the pandemic. Moreover, the interim results might also shed additional light on the strategies being adopted by the three banks to improve their profitability in the context of today’s challenging environment which goes beyond the pandemic and includes other significant hurdles such as the very low interest rate scenario, the additional jurisdictional risks of Malta after the country was placed under the ‘grey-list’ by the FATF, as well as the disruption being created by fintech and other technological innovations.

An important area of interest by the investing public since the start of the pandemic (especially with respect to the three banks who have equity securities in issue and not solely bonds) was the ability of banks to resume the payments of dividends following the recommendations by the European Central Bank issued in late 2020 for banks to refrain from or limit dividends until 30 September 2021. However, the FSR notes that banks are encouraged to continue preserving capital and to continue to build their provisions to mitigate any potential rise in credit risk in view of the lingering uncertainty surrounding the pandemic. HSBC Bank Malta plc and Lombard Bank Malta plc started distributing dividends to shareholders following the publication of the 2020 annual financial statements some months ago in line with the recommendations by the European Central Bank.

Given the substantial influence that the banking sector has on overall investor sentiment, the willingness and ability of Bank of Valetta plc, HSBC Bank Malta plc and Lombard Bank Malta plc to distribute further dividends to shareholders in the months ahead will be an important driver of the performance of the local equity market in general.