Although the MSE Share Index touched fresh 9-year highs on various occasions during the first quarter of the year, trading activity across the equity market had declined by 26.6% to €19.5 million when compared to Q1 2016. In my article reviewing the first three months of 2017, I had reported that it was the weakest Q1 in terms of equity market activity since 2014.

It is worth highlighting that this trend was reversed during the second quarter of the year as the total value of trades across the equity market amounting to €20.6 million improved when compared to Q1 2017 (€19.5 million) and Q2 2016 (€18.6 million). Once again, the top performer during the past three months was Santumas Shareholdings plc. Following the 52.5% rally during 2016 and the 35% rise during the first quarter, the equity advanced by a further 17.7% to a new all-time high of €2.00. The equity of one of the smallest companies listed on the Malta Stock Exchange (MSE) jumped by over 58% during the past 6 months. The other star performer during the second quarter of the year was RS2 Software plc with a share price rise of 15% which helped offset the 11% decline in the first three months. In fact, the equity of RS2 is now among the positive performers during H1. Further information on the performance of RS2 is provided below.

A number of developments took place during the past three months which are worth mentioning, namely (i) the commencement of trading in the shares of PG plc; (ii) the end of the financial reporting season; (iii) the publication of Interim Directors’ Statements by a few companies and (iv) the conclusion of the Annual General Meeting season.

As I had reported some months ago, the Initial Public Offering of PG plc was one of the most important highlights of Q1 since it was the first IPO since 2013. The IPO consisted of an offer by Mr Paul Gauci of 27 million shares at €1.00 each and the demand from the investing public was overwhelming. As the equity commenced trading on 4 May, this spilled over onto the secondary market as the share price rallied by 29% within the first five days on very high levels of trading activity. In fact, 1.93 million shares changed hands during the first five trading days, representing 1.8% of the issued share capital (amounting to 108 million shares) and 7.1% of the free float (the 27 million shares that were offered to the general public). The huge activity in PG shares led to an increase in the value of trades across the local equity market in May to €10.1 million – the busiest month for the equity market since February 2016. PG’s financial year came to an end on 30 April and during the summer months, the company will publish its annual financial statements.

When I had published a review of Q1 2017, I had mentioned that Medserv plc, Tigné Mall plc, MIDI plc, RS2 Software plc and International Hotel Investments plc were still due to publish their 2016 financial statements. Naturally, all 5 companies published their financial statements by the deadline on 30 April. The weak financial performance of Medserv plc and the lack of a dividend resulted in this equity ranking among the weakest performers during the second quarter of the year with a decline of 17.7%. The share price dropped to €1.19 (its lowest level since early May 2015) but then partly recovered to the €1.30 level. Medserv also published its Financial Analysis Summary in recent weeks showing that the company expects the weak performance to continue during 2017. In fact, Medserv is expected to report a pre-tax loss of €1.42 million in 2017 compared to a pre-tax loss of €2.45 million in 2016. Meanwhile, Tigné Mall plc reported that it registered a further 6.7% increase in pre-tax profits during 2016 to €3.06 million which is also 16.5% above the projected pre-tax profit figure of €2.63 million published in the IPO Prospectus dated 20 March 2013. Despite this outperformance and the declaration of another dividend, the share price of Tigné Mall ended the second quarter 7.7% lower at €0.98 after only partially recovering from a low of €0.90.

Unfortunately, since the removal of the obligation for companies to publish an Interim Directors’ Statement twice yearly, few companies continued to issue such important statements which used to provide valuable information to investors. One of the companies that generally publishes the most detailed information is Malta International Airport plc since it also includes highlights on its financial performance. The airport operator stated that during the first three months of 2017, its financial performance was much better than the corresponding period last year. MIA reported that passenger numbers grew by 22.2% year-on-year, resulting in a 15.8% increase in turnover to €13.4 million (Q1 2016: €11.6 million) and a 33.2% surge in earnings before interest, tax, depreciation and amortisation (“EBITDA”) to €5.82 million. As at the end of March 2017, MIA had a cash balance of €42.8 million which represents a 17.1% increase over the balance held as at 31 December 2016. 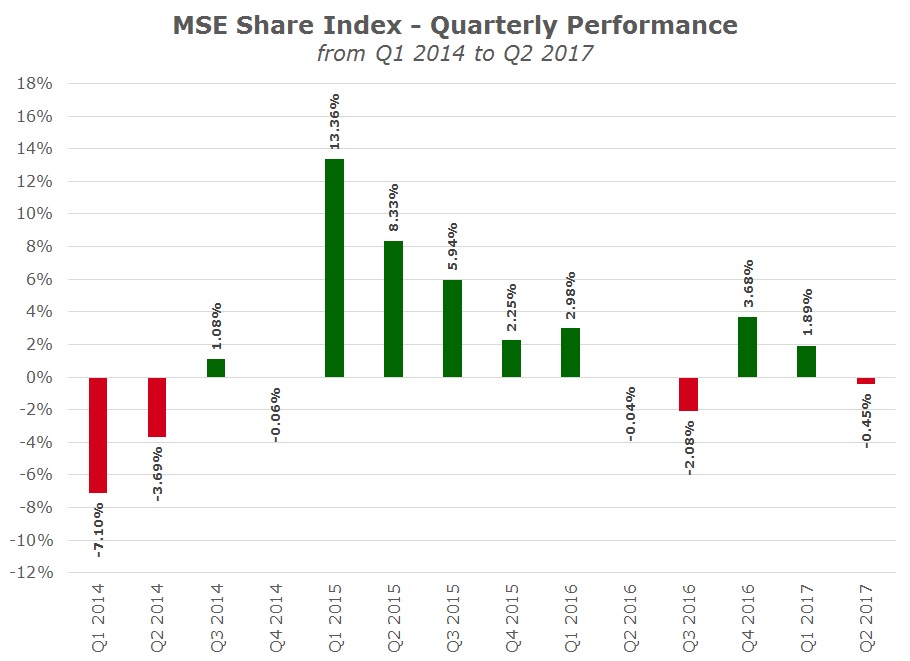 Medserv published a lengthy Interim Directors’ Statement on 22 May in which it concluded that its performance in 2017 will be split in two parts. The sluggish performance in the integrated logistic support services area of activity will continue to weigh on the Group’s financial performance but it is expected that this segment will recover in the latter part of the second half of the year as both the Malta and Cyprus operations return to production. The projected strong performance over the entire year by the OCTG sector in the Middle East is expected to have a positive impact on the Group’s results for 2017. According to the Directors, both areas of activity are then expected to be strong contributors to the Group in 2018 as the industry recovers, stabilises and returns to growth.

The second quarter of the year is also characterised by the Annual General Meeting (AGM) season where companies with a December year-end must convene their annual shareholders’ meeting by 30 June. An AGM is an important event in the corporate calendar of a publicly quoted company. On the one hand, it provides an opportunity for a company to present its main achievements to shareholders while on the other hand shareholders have an opportunity to air their views and gauge the success or otherwise of the company’s achievements and future plans. One of the important events of recent weeks was the AGM of RS2 Software plc. During the meeting held on 20 June, Chairman Mr Mario Schembri disclosed that the company applied with the Planning Authority to extend the existing head office in Malta and also build another block since the company requires additional space in view of the business currently being contracted and other potential contracts in the pipeline. On his part, CEO Mr Radi El Haj confirmed that 9 new managed services implementations will be concluded by the end of 2017 while contract negotiations are ongoing with various other potential customers. These clients emanate from various countries including Argentina, Brazil, India, Europe, Australia, Thailand, Israel, Canada and also the US. Since the AGM a few weeks ago, RS2’s share price recovered rapidly from the decline registered in previous months on very high volumes. In fact, the equity climbed by 15% on volumes amounting to 643,909 shares.

Although the summer months are normally characterised by weaker trading volumes and general subdued investor sentiment, a number of developments may lead to interesting movements across the equity market this year. The interim reporting season which commences in two weeks’ time is always an important period where investors can assess the financial performance of a company and hopefully several companies will also provide an overview of their future expectations and business developments. News relating to the ongoing sale of shares by the largest shareholder of Lombard Bank Malta plc could also be a very important event for the market during the summer months. According to the information available online a while ago from the Investment Bank of Greece, who is leading the sale process, those investors who were shortlisted to access the data room and conduct due diligence ought to have submitted a binding offer by last Monday 3 July and the indicative timelines published earlier this year indicated that a share purchase agreement should be signed by 24 July. Finally, as I had indicated in an article last month, three companies announced their intention to carry out rights issues, namely Bank of Valletta plc, FIMBank  plc and GlobalCapital plc. Although no specific timeframes were provided as yet, news from any of these companies confirming the amount being raised and the issue price could be another important development during Q3 2017.