As global equity markets tanked last week marking the end of the 11-year bull market and the worst week for international equities since 1987, the Maltese equity market also suffered from the effects of Covid-19. The MSE Equity Price Index plunged by 7.6% last week (the worst weekly performance in several years) to drop to its lowest level since August 2015.

In view of the sudden change in investor sentiment following the rapid spread of the coronavirus across Europe causing the World Health Organisation to declare Covid-19 as a pandemic, many investors may rightly assume that it would be best for one’s investment portfolio to have a high allocation towards ‘safe-haven’ assets. These are generally considered to be sovereign bonds, gold and a small number of currencies such as the US Dollar.

Malta Government Stocks may be deemed by many local investors to be a safe-haven asset which should perform strongly in times of investor pessimism. However, last week’s movements in MGS prices may have surprised and disappointed the local investing community. The RF MGS Index registered a decline of 1.5% representing its worst weekly performance in over 3 years notwithstanding the fact that the yield on the eurozone benchmark German bund dropped to a fresh all-time low of -0.91% on Monday 9 March implying a rally in bond prices.

In some articles over recent years I had explained how MGS prices are influenced by various factors including the publication of economic data, international economic and political developments as well as monetary policy announcements.

More specifically, I had also mentioned that although the Central Bank of Malta never formally disclosed its pricing mechanism for MGS, it is evident from movements over recent years that developments taking place across the sovereign bond markets in Italy and Spain have a sizeable impact on the indicative prices published by the Central Bank of Malta on a daily basis.

Italy is one of the worst-hit countries in Europe from the spread of the coronavirus, with the death toll shooting past 1,800 people as at last Sunday and the government ordering a lockdown across the entire country. It is therefore not surprising that the yield on Italian government bonds shot up recently reflecting the increased risk of holding Italian debt.

Italy’s 10-year bond yield more than doubled since early February 2020 from a level of less than 0.9% to over 1.9% last week. The significant spike in yields naturally results in a sharp downturn in bond prices. Only last week, Italy’s 10-year bond yield surged around 72 basis points – its biggest weekly rise since 1994. On Thursday, following the monetary policy meeting of the European Central Bank, the yield climbed by an incredible 55 basis points – such a jump in a single day was last experienced in November 2011 at the time of the elevated fears over the euro zone debt crisis. The reason for such a surge in yields was the decision by the ECB to keep rates steady and place the onus firmly on governments to implement aggressive expansionary fiscal policy measures to offset the adverse economic impact from the Covid-19 outbreak. Comments made by the President of the ECB Christine Lagarde contributed to a further sell-off in Italian government bonds when she remarked that it was not the central bank’s job to help “close spreads”. Ms Lagarge was referring to the yield spread, or ‘risk premium’, over German bond yields that riskier southern European countries must pay investors for their borrowing requirements. 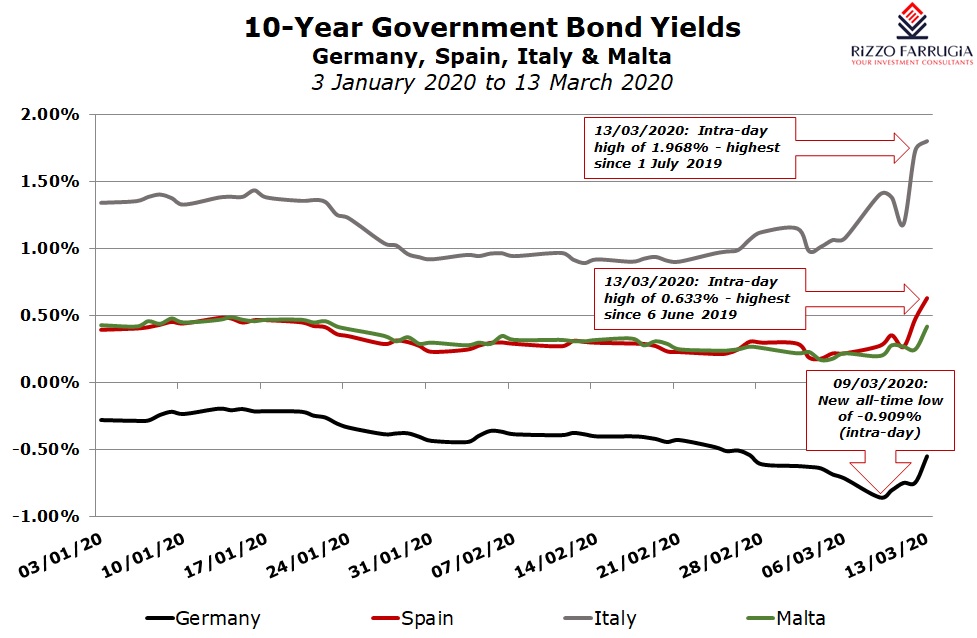 The Italian/German bond yield spread is currently at around 250 basis points after having widened by 60 basis points within a week – the biggest weekly spread widening since mid-2018 when an Italian political crisis sparked a bond market rout. Financial analysts at ING Bank predict that the spread between Italian and German bond yields will continue to widen to 300 basis points.

The Spanish 10-year bond yield also jumped in a spectacular fashion in recent weeks as it surged from only 0.14% in early March 2020 to above 0.60% in the space of only 10 days. Over the weekend, Spain announced a nationwide lockdown for an initial 15-day period as the number of coronavirus cases surged. This resulted in a further rally in Spanish yields on Monday morning with the 10-year bond yield rising to a high of 0.78%.

In view of the deteriorating circumstances in Italy and Spain, one would expect the yields on their government bonds to continue to remain elevated when compared to the German benchmark unless other emergency measures or policies are enacted by the authorities. As such, MGS prices may continue to disappoint the local investing community in the near term as was evidenced by the steep decline in prices on Monday 16 March.

Meanwhile, last weekend, the international credit rating agency Standard & Poor’s maintained Malta’s credit rating at 'A-‘ but revised its outlook lower from 'positive' to 'stable' due to “a likely sharp economic slowdown emanating from the spread of COVID-19”. The credit rating agency also said that it had revised the outlook to stable because “the country’s reputational risks related to weaknesses in regulatory financial and anti-money-laundering supervision represent an increasing risk to its macro-financial stability”. As a result of the fluidity in the spread of the virus in Malta and the uncertainty on the length of time until economic activity returns to some normality, it is difficult for any rating agency to predict the exact impact on Malta’s economic growth. Any downgrades for Malta’s credit rating below the current level of ‘A-‘ may also dampen MGS prices irrespective of the ongoing movements in Italian and Spanish yields.

In view of these extraordinary times, the Central Bank of Malta ought to reconsider its current stance and start indicating its methodology for the pricing of MGS to enable the investing community to have a better understanding of how this asset class may possibly behave in the months ahead.