At the start of October, I had published an article on the performance of the local capital market during the third quarter of the year in which I highlighted the outperformance of Malta Government Stocks compared to the MSE Equity Price Index.

During the third quarter of 2019, the Rizzo Farrugia MGS Index advanced by 3.2% bringing the year-to-date gains to an extraordinary 7.6% – on track for the second-best annual performance ever.

I had also explained that the rally in the MGS market reflected developments across the eurozone sovereign bond market as yields declined to fresh record levels at the beginning of September. The 10-year German benchmark bund yield dropped to as low as -0.74% on 3 September after breaking through the negative barrier again in the second half of March 2019. In recent months, German bund prices rose (yields declined) to such an extent that all German sovereign bonds were producing negative yields. The 30-year German bund had dropped to a record negative yield of -0.31% in mid-August.

In Malta, yields across the entire MGS market dropped below the 1% level following the strong upturn in prices during the summer months. The yield on the longest-dated MGS, the 2.4% MGS 2041, dropped below the 1% level on 5 August. The price of the 2.4% MGS 2041 continued to climb since then reaching an all-time high of 134.56% on 4 October which represented a gain of just under 26 percentage points since the start of the year.

However, since early October, MGS prices eased somewhat as eurozone yields recovered from their all-time lows. In fact, the 10-year German benchmark bund yield currently stands at around -0.37% after dropping to a low of -0.74% and the yield on the 30-year German bund is back in positive territory (+0.12%) compared to the low of -0.31% in August.

The movement in prices of Malta Government Stocks reflected the changes in yields across the eurozone. The two longest dated MGS – namely the 3% MGS 2040 and the 2.4% MGS 2041 – dropped by over 6 percentage points from their peak in a matter of approximately five weeks before partially rebounding. Similarly, the 10-year 5.1% MGS 2029 is now well below its peak of 149.8% recorded in late August having first slumped by nearly 5 percentage points to 144.81% before edging back up to above 145%.

Despite the recent downturn in MGS prices, it is worth highlighting that the overall performance of the MGS market is still very positive this year with the three longest-dated MGS producing equity-like returns and soaring by more than 20 percentage points.

At the start of the year it was extremely difficult, to envisage or anticipate that some of the longer-term MGS would have produced double-digit returns during 2019 given the series of interest rate hikes by the US Federal Reserve in 2018 and coupled with the termination of net asset purchases by the European Central Bank in December 2018.

Some investors may wonder what caused such strong volatility in the bond market once again in recent weeks.

The decline in sovereign bond prices across the developed capital markets was driven by reassuring developments on various fronts, the most notable being the trade impasse between the US and China, Brexit and an improvement in economic data in certain economies.

Ten-year US Treasury yields approached nearer to the 2% level in recent weeks compared to their lowest levels this year of 1.43% in early September. Likewise, in the UK, although movements in Treasuries were overshadowed by the fluid situation related to Brexit, it is indeed remarkable to note the swing in the 10-year UK Treasury yield which from a 2019 high of 1.38% in mid-January dropped all the way to 0.34% in early September before rebounding to 0.7%.

Another statistic which shows how the rally in sovereign bonds stalled is the level of negative yielding bonds around the world. In the midst of the rally in sovereign bond prices during the summer months, various financial journals remarked that the stock of government bonds and corporate debt with negative yields had climbed to the equivalent of circa USD17 trillion. However, following the slight improvement in investor sentiment, the amount of bonds producing negative yields declined to USD12.5 trillion clearly showing the fast manner in which yields began to recover and prices declined. 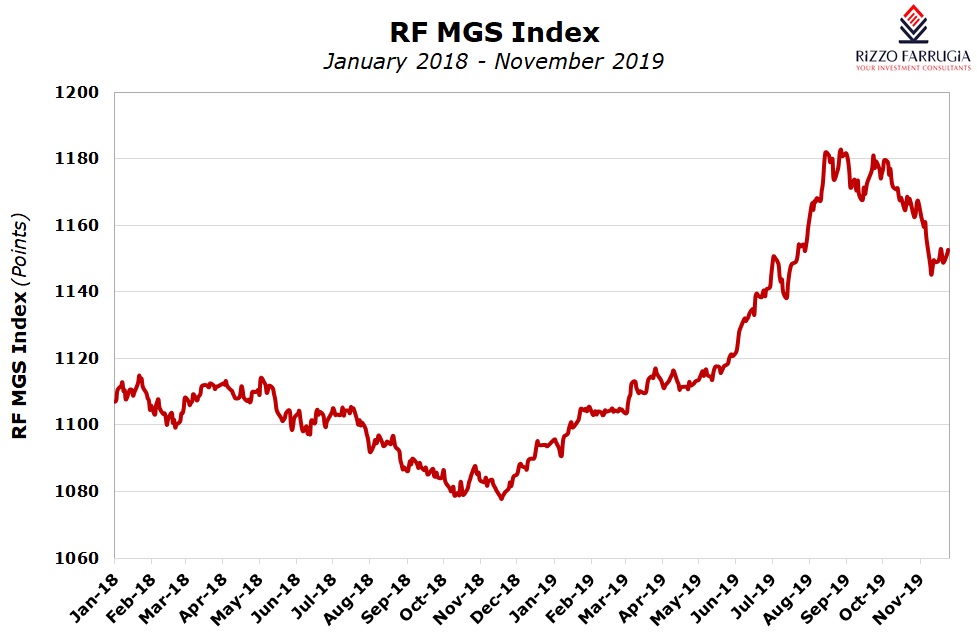 Investor confidence was also boosted by the continued positive performance of the US economy. The Chairman of the US Federal Reserve, Mr Jerome Powell, recently explained to Congress that he saw “no reason” why the economic expansion in the US could not continue in the immediate term amid a very low unemployment rate as well as strong consumer spending dynamics. Mr Powell also indicated that the Federal Reserve does not plan on changing its target range for the federal funds rate, at least in the short term, and attributed some of the US economy’s recent strength to the central bank’s timely decisions to lower interest rates this year.

Economic developments across the single currency area were also more encouraging, reflecting a number of better than expected indications including a slight growth in Q3 2019 German GDP compared to an earlier forecast of a mild contraction. On the other hand, inflation remained subdued with an inflation rate stuck at the 0.7% level which is well below the ECB’s target of close to 2%.

Despite the recovery in yields which led to such a sharp correction in sovereign bond prices, some international commentators still believe that it may be premature to describe this as the end of the multi-year bull market for bonds. They cite that although expectations of a positive trade outcome between the US and China has undoubtedly improved in recent weeks, there is still a high level of uncertainty as evidenced from the headlines almost on a daily basis. Moreover, the European Central Bank restarted its bond-buying programme earlier this month, and there is little prospect of an interest rate rise in the eurozone for several years.

On the other hand, some international commentators argue that due to the limited availability of additional monetary policy measures, policymakers need to shift their focus to fiscal stimulus in an attempt to boost growth and inflation expectations which could eventually lead to a continued recovery in bond yields and therefore a decline in bond prices. In this respect, it is also worth highlighting the recent comments expressed by Mario Draghi who, in his farewell remarks before Christine Lagarde took over the Presidency of the ECB, urged that “a more active fiscal policy in the euro area would make it possible to adjust our policies more quickly and lead to higher interest rates.” On the same lines, in her first speech as ECB President, Ms Lagarde picked fiscal policy as the “key element” for the eurozone to boost internal growth.

Bond yields ultimately reflect expectations for the future path of interest rates. If fiscal stimulus measures lead to improved economic growth in the long-term, this will then prompt central banks to lift rates thereby leading to an eventual normalisation of bond yields.

Prices of Malta Government Stocks will invariably continue to reflect the movements in eurozone bond yields. Due to the various important developments taking place across international financial markets which directly impact bond yields, MGS prices are likely to remain volatile in the near term following the strong performance in 2019.