On Friday 12 January 2018, Malta International Airport plc held its customary press conference and concurrently issued a company announcement on the Malta Stock Exchange to disclose the 2017 traffic statistics, the 2018 passenger forecast as well as the financial guidance for the financial year to 31 December 2018.

During 2017, MIA registered a remarkable 17.5% increase in passenger numbers to 6,014,548 passenger movements, representing the eighth consecutive annual record. This was slightly ahead of the revised projections issued in July 2017 when the airport operator had indicated that it expected that passenger movements would amount to circa 5.8 million, representing a growth rate of between 14% and 16%.

Another remarkable statistic is that double-digit growth in passenger movements was registered in each month during 2017. This is the first time in the airport’s history and must also be seen in the context of the significant rise in passenger numbers in recent years. In fact, during the press conference, MIA’s CEO Mr Alan Borg displayed a graph of annual passenger movements since 2007 and highlighted that passenger traffic doubled over the past 10 years from 2.97 million in 2007 to just over 6 million in 2017. This equates to an average growth rate of 10% per annum which is a truly important achievement for the company as well as Malta’s economy in general.

2017 was also the year when the highest growth was ever registered. When reviewing statistics of past years, the airport had never registered such a high level of growth. The notable achievement in 2017 can also be analysed in the context of the time taken to register an additional 1 million passenger movements. In fact, MIA had registered 5 million passenger movements in December 2016 and it therefore took just over 12 months to add a further 1 million as the 6 million level was reached during the final day in 2017. Previously, it had taken 5 years (between 2008 and 2013) to increase from 3 million passengers to 4 million while it then only took 3 years (between 2013 and 2016) to reach the next 1 million milestone.

During the press conference, other important traffic statistics were provided in terms of the airlines and markets which contributed to the growth in 2017. Ryanair registered an extraordinary growth of 26.5% in passenger numbers to 2.2 million helping this major low-cost carrier maintain its top spot as the airport’s most important airline. AirMalta grew by 3.8% to 1.66 million while Easyjet registered a 10% growth. MIA also indicated that its top markets all registered growth during 2017 with passenger numbers from the United Kingdom increasing by 8.9% (24.6% market share), Italy showing a growth rate of 14.8% (20.4% market share), Germany adding 20.9% (13.4% market share), France rising by 20.6% (5.9% market share) and Belgium registering a growth of more than 100% (4% market share).

Another very important statistic that is regularly monitored by MIA and other operators in the airline industry across the world is the seat load factor, which indicates the average occupancy of the airlines travelling to and from Malta. Despite the 18% increase in seat capacity to 7.3 million seats, the seat load factor still surpassed the 80% level and only edged marginally lower from the previous year. The 2017 seat load factor of 82.4% represents a slight decline from the record level of 83.3% in 2016.

As indicated earlier, on 27 July 2017 MIA had announced a sizeable uplift to its 2017 traffic forecasts from January’s projection of 5.2 million passenger movements (growth rate of between 2% and 3%) to circa 5.8 million, representing a growth rate of between 14% and 16%. On the same day, the company also revised upwards its financial projections to a total revenue figure of over €79 million (+8% over 2016), an earnings before interest, tax, depreciation and amortization (EBITDA) of over €45 million (+12.5% over 2016) and a net profit of over €23 million (+9.6% over 2016). MIA had also announced that it expects to end the 2017 financial year with a nil net debt position (i.e. a level of debt which is equivalent to the amount of cash liquidity) and that it will contribute €16 million to the Government of Malta by way of taxes and dividends. The Government still holds a 20% equity stake in MIA. 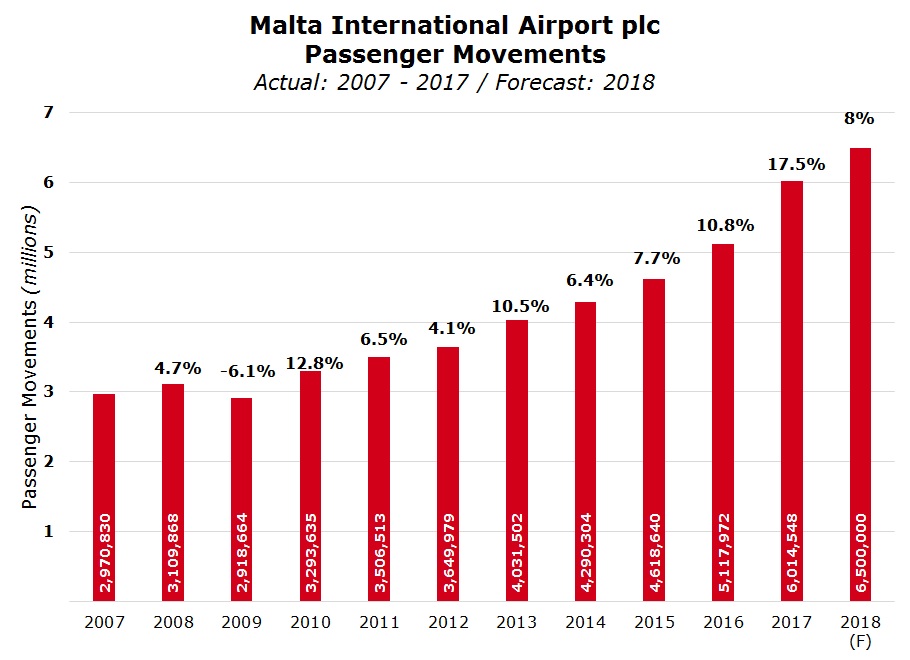 Since the company exceeded its passenger forecast during 2017 as it surpassed the 6 million level, it should also have slightly surpassed its financial targets. The 2017 financial statements which are due to be published on 21 February will enable financial analysts and investors to determine the extent of the company’s outperformance compared to the financial projections of July 2017. Possibly, the more interesting part of the announcement due on 21 February is the final dividend proposed to all shareholders ahead of the Annual General Meeting. MIA had given a good indication some months ago when it referred to the contributions envisaged to be given to the Government of Malta. These should total €16 million in respect of the 2017 financial year compared to €14 million in the previous year.

On 12 January 2018, MIA also announced that it is projecting further growth in passenger movements of between 7% and 9% to yet another record figure of around 6.5 million passengers. This is based on the current winter schedule as well as the summer schedule that has been confirmed so far. The company expects an additional 16 new routes in the summer period thereby raising the airport’s destination network up to 100 routes.

MIA also published its financial targets for 2018 showing an expected revenue figure in excess of €87 million (+10% over the projected figures for 2017), EBITDA of more than €52 million (+15% over the expected level of 2017) and net profit in excess of €28 million (+21.7% over the 2017 projection).  Moreover, by the end of 2018, MIA is also anticipating that it will be in a net cash position, meaning that its level of cash will be higher than the amount of borrowings. This is a very important indicator showing the financial leverage of the company. MIA has extensive financial resources (the excess cash coupled with the ability to raise funds given the low level of borrowings) in order to finance its ambitious expansion programme. This includes the further expansion of the terminal building at the departures lounge to accommodate an additional 15 check-in desks and three new departure gates together with additional seating as well as food & beverage outlets. Moreover, should the Planning Authority approve the company’s masterplan, MIA may proceed with the development of another level of car parking facilities as well as the construction of a further two business centres including a business hotel.

Following the recent company announcement on the 2017 record figures and the 2018 traffic and financial projections, MIA’s share price continued to edge higher and touched yet another new all-time high of €5.00 last week. In my article published a few weeks ago reviewing the 2017 performance of the Maltese equity market, I made reference to the very high level of trading activity in MIA where a total of 2.78 million shares changed hands in 2017 for a value of €11.98 million – the second most actively traded equity after BOV. Another important milestone was the increase in the market capitalisation of MIA (at over €675 million based on a share price of €5.00) which has now surpassed that of HSBC Bank Malta plc. Since only the ‘A’ shares of MIA are listed on the MSE (representing 60% of the overall issued share capital), few investors and analysts may actually take into consideration the overall size of the company. However, it would be fair to base one’s calculation for portfolio allocation purposes on the entire issued share capital (amounting to 153.3 million shares) rather than only on the ‘A’ shares. The equity indices drawn up by the MSE (namely the Equity Price Index and the Total Return Index) should also be adjusted to take this important achievement into consideration in order to depict a better picture of the situation for the investing public.