Malta International Airport plc was one of the few companies that published an announcement recently to provide information on its financial performance during the third quarter of the year.

Between January and September 2022, the airport operator generated total revenues of €66.5 million. While this figure is naturally significantly higher than that achieved in the past two years, the best comparative figure would be that of 2019 prior to the start of the COVID-19 pandemic. In this respect, during the nine-month period to 30 September 2019, MIA’s revenue had amounted to €77.3 million. As such, while the recovery over recent months has been much stronger than originally expected, the overall revenue generated is 13.9% below the figure in 2019. Similarly, the adjusted EBITDA of €42.6 million (when excluding the impact of the government wage support scheme) is 14.2% lower than the level of €49.6 million generated in the first nine months of 2019. Overall, MIA generated a net profit of €21.7 million during the first nine months of this year compared to €26.9 million in the comparative figure of 2019.

The balance sheet as at 30 September 2022 confirms that the company remained free from any bank borrowings. Moreover, the amount of available cash is truly remarkable at €53.7 million compared to €32.7 million as at the end of 2021.

Ever since the start of the pandemic in early 2020, MIA had stopped providing traffic and financial projections due to the high degree of uncertainty in view of the COVID restrictions. However, the company started issuing guidance to the market once again earlier this year when on 27 July it had announced that it expected to register passenger movements of over 5.4 million which would translate into revenues of over €82 million, EBITDA of over €50 million and a net profit of over €23 million.

In the announcement on 11 November 2022 together with the January to September financials, MIA also upgraded its traffic and financial targets for 2022. As a result of the continued strong momentum over recent months, the company now expects passenger movements to exceed 5.7 million, representing an improvement of 5.6% over the previous estimate. In 2019, the company had registered a record amount of passenger movements totalling 7.31 million. In view of the higher level of passenger figures, revenues are now expected to amount to over €85 million with EBITDA exceeding €52 million and a net profit before the recently adjudicated €12 million tax credit of over €25 million. Given the actual financial results until 30 September and the October traffic figures published earlier this month, it would not be surprising for the company to also exceed these upgraded forecasts.

Incidentally, some weeks ago, a foreign financial analyst published a report on MIA’s parent company Flughafen Wien in which the projected revenue figures for Malta were provided not only until the end of 2022 but also for the subsequent three financial years. This analyst predicts that MIA will generate revenue of €90 million in 2022 rising consistently to €104 million in 2023, €114 million in 2024 and €120 million in 2025.

While this positive trajectory may seem rather optimistic, it is worth noting that the European arm of the Airports Council International (“ACI Europe”) is projecting that in 2024, airport traffic in Europe will reach 2019 levels once again followed by a 9% growth in 2025 and a further increase of 8.3% in passenger movements in 2026. 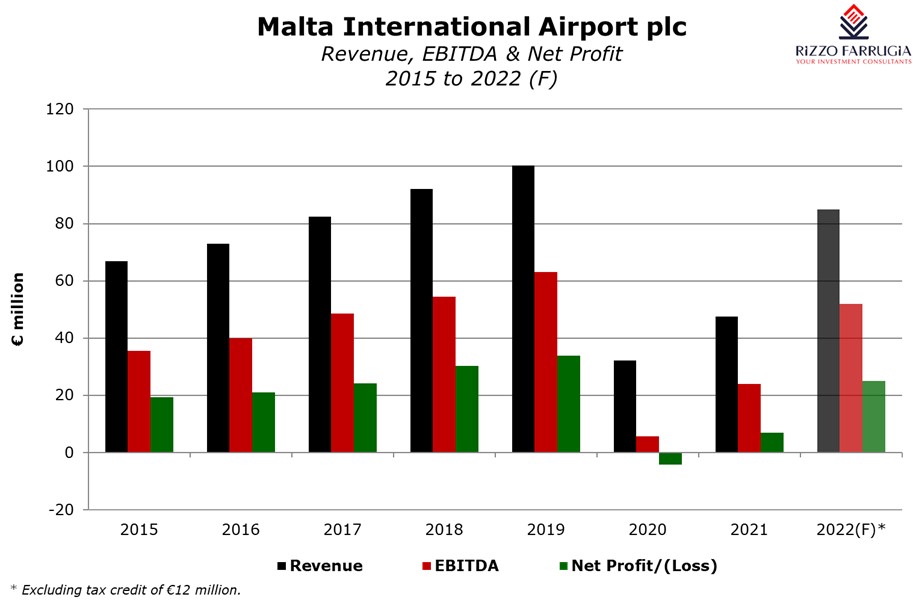 Should this projection materialise also for MIA, it would mean that by 2026, the total amount of passengers passing through the airport operator’s terminal would reach 8.63 million which would be 18% higher than the record figure of 7.31 million movements registered in 2019.

An important observation is that since May 2022, the seat load factor for airlines operating to and from Malta was consistently superior to that achieved in 2019 reflecting the robust pent-up demand for air travel despite the inflationary pressures.

MIA’s shareholders should be very pleased at the strong demand for air travel over recent months and the subsequent improvement in the company’s financial performance following the challenging environment over the past two years. Unfortunately, the company has not yet reinstated its semi-annual dividend to shareholders. MIA paid regular semi-annual dividends ever since the company’s listing on the MSE in 2002. Dividends have not been paid since early 2020 when the 2019 final dividend of €0.10 per share had first been proposed by the Board of Directors on 26 February 2020 but this was cancelled ahead of the AGM in May 2020 following the onset on COVID-19.

However, given the huge cash pile of €54 million as at 30 September 2022, one would expect the company to resume dividends in early 2023 once the 2022 annual financial statements are approved despite the high level of investments required in Apron X, SkyParks II and eventually also the AirTerminal expansion project.

Investor sentiment remains very weak across the Maltese equity market due to the significant challenges over the past three years commencing with the political crisis in November 2019, followed by the start of COVID-19 in 2020, Malta’s greylisting in June 2021 and the Ukraine war in February 2022. The reinstatement of dividends by Malta’s airport operator could be an important catalyst for a gradual improvement in investor sentiment.