Earlier this week, Mizzi Organisation Finance plc launched a €45 million bond issue carrying a coupon of 3.65% per annum and maturing between 2028 and 2031. In view of the early redemption option, the bonds are classified as complex financial instruments and thus they are only appropriate and/or suitable for investors who have the knowledge and experience to understand the risks that are specifically related to such callable bonds.

This is the third time that Mizzi Organisation is utilising the debt market. The previous bond issues were launched in 2002 and 2009 with the latter €30 million bond being redeemed early in 2016 since it too had been structured as a callable bond.

The group is one of the largest private enterprises in Malta with a broad portfolio of business interests across various economic sectors including automotive; manufacturing, importation, and distribution of beverages; hospitality, tourism, and leisure; mechanical and engineering contracting; property as well as food and fashion retail. The various group companies have relationships with a number of well-known multinational companies such as The Coca-Cola Company, the Volkswagen Group, BMW AG, Nissan, Mitsubishi and Hitachi to name just a few.

From a financial aspect, the automotive, beverage and hospitality segments historically contributed the large majority of operating profits at over 70% of EBITDA. Naturally, the outbreak of the COVID-19 pandemic in early 2020 had a sizeable negative impact on the financial performance of the group despite the extensive portfolio of assets and investments across a broad range of economic sectors. The group recorded a drop of more than 40% in EBITDA in 2020 to €9.74 million compared to €16.6 million in 2019 and €14.6 million in 2018. The beverage and hospitality segments were the ones mostly hit by the pandemic due to their dependence on tourism and social events.

The forecasts provided in the Prospectus published earlier this week show that the group is expecting a rapid recovery in EBITDA as this is projected to reach the pre-pandemic level of €16.5 million by 2022. The strong rebound is anticipated to be mostly driven by the beverage and hospitality segments although the extent of the recovery of hospitality (the Waterfront Hotel being the main operating asset in this business segment) is estimated to be at a more gradual pace compared to other business units. In fact, the EBITDA contribution from hospitality in 2022 is still envisaged to be approximately 50% lower than the level achieved prior to the outbreak of the pandemic. Elsewhere, the anticipated surge in EBITDA by the automotive division reflects the expectation that the encouraging momentum in new car sales currently being recorded (also helped by the added costs of importation of used vehicles into Malta post-Brexit) will extend further in the coming months.

Apart from these three important business units generating over 70% of EBITDA, it is worth emphasizing that the Mizzi Organisation is the owner of a significant portfolio of real estate valued at approximately €165 million situated in prime locations. The properties are mainly either used for the group’s own operations or rented out to third parties while others are presently unutilised. It is anticipated that Mizzi Organisation will dispose of some of its non-core properties in the coming years while other properties are earmarked for future development including a sizeable parcel of land located in Blata l-Bajda (known as the ‘Ħofra Project’).

In fact, one of the strategic priorities of the group in the coming years is to optimise its vast portfolio of properties through relocations, consolidation, redevelopment, and/or the crystallisation of the significant amount of value accumulated throughout the years. 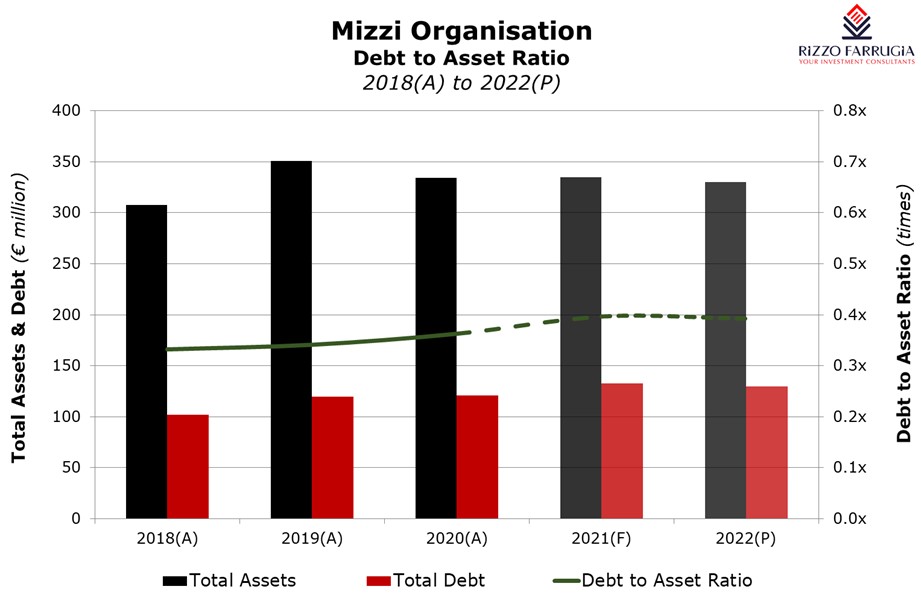 One major initiative in this respect is the impending conclusion in the coming months of the sale of a large part of the property in Qormi that in the past used to house the beverage manufacturing factory. This transaction, together with the potential sale of other underutilised properties (which in aggregate have an estimated market value of €18.5 million) will not only serve as a catalyst for a leaner business model but also enable the group to make more efficient allocation of its capital and resources with a view of generating higher returns as new capital is deployed towards avenues that produce additional cash flows.

Over the years I published various articles indicating the importance for investors to assess the financial strength and soundness of a company before contemplating an investment in bonds. This is done by performing an analysis of the financial statements and using financial ratios to gauge the credit worthiness of a company. In recent years I made reference to a number of credit metrics to rank the strength of the Maltese corporate bond issuers by publishing the interest coverage ratio and other ratios to measure the overall level of gearing.

The leverage ratio that was prominently published over recent years was the net debt to EBITDA multiple showing the number of years it would take a company to repay its overall level of borrowings. This is an excellent ratio since it gives a very strong indication on the cash generation of a company and the extent that it can sustain indebtedness.

Other more traditional leverage ratios are based on the overall level of assets of a company compared to the debt level. This is an important metric for those companies that hold a sizeable amount of property assets. The debt to asset ratio, also known as the debt ratio, indicates the amount of assets that is being financed by debt. The higher the ratio, the greater the degree of leverage and financial risk of a company.

In the case of the Mizzi Organisation, the total indebtedness following the bond issue will represent just 0.4 times of total assets which means that the amount of total assets is two-and-a-half times Mizzi Organisation’s total debt of around €130 million when including lease liabilities of almost €15 million. As such, the group’s asset base having a book value of well over €300 million is not only reflective of its overall size but should also provide significant comfort to investors in terms of financial strength and credit profile.

Following the €60 million bond issue by GO plc in June, this is the second large corporate bond issue in Malta for 2021. The significant demand shown for the GO plc bonds could have been partly due to a mobilisation by investors of the excess deposits (idle liquidity) within the banking system being channelled into the capital market. This could be one of the catalysts for a very interesting period ahead for the Maltese capital market despite the continued uncertainty arising from the country’s FATF grey-listing.