During the last two months of the year, new corporate bond issuance is expected to remain elevated thereby culminating in a record year for primary market activity.

The announcements by these 5 companies entail a total issuance of €137 million. Coupled with the numerous bonds already offered to the public since the start of the year amounting to €336.6 million, the overall total issuance of new corporate bonds for 2022 at €473.6 million would represent a new record level thereby surpassing the previous record of €358 million in 2019.

This does not exclude the possibility of other companies that may also be in the final stages of a public bond issue of disclosing their plans to the market. While there is a requirement to issue an announcement via the Malta Stock Exchange to disclose new debt funding or exchange offers in respect of upcoming bonds for redemption for companies such as the 5 mentioned earlier, no similar procedure is adopted by companies that as yet do not have any publicly-held debt and/or equity on the Malta Stock Exchange. In such instances, a Formal Notice is published in the media informing the public of the publication of a prospectus following regulatory approval.

Best Deal Properties Holding plc is the only company among the 5 upcoming bond issuers that is offering an entirely new bond without some sort of exchange offer to existing bondholders.

On its part JD Capital plc will be seeking to offer holders of the existing €5 million bonds that had been admitted to the Prospects Market some years ago to exchange their holding into new bonds being issued on the Regulated Main Market and thereby subject to approval by the Malta Financial Services Authority. JD Capital intends to issue an initial bond of €14 million through a secured bond issuance programme of up to €25 million.

In a first for the market, Von der Heyden Group Finance plc will be convening a meeting for bondholders to change the redemption date of the €25 million 4.4% existing bonds from 8 March 2024 to 16 December 2022. Should this change be approved in next week’s meeting, a new bond issue of €35 million maturing in 2032 will take place immediately thereafter.

Meanwhile, Mariner Finance plc will be carrying out a bond exchange offer in the more traditional manner that Maltese bondholders have been accustomed to. In essence, existing holders of Mariner bonds will be offered the possibility of either exchanging their current bonds into new bonds or retaining the existing bonds until the final maturity date. In this respect, Mariner Finance plc will also be increasing the issued amount from €35 million to €60 million. On the other hand, MedservRegis plc recently effected a partial redemption of the 6% secured bonds 2020/23 and will be seeking to redeem the remaining €13 million through the issuance of a new bond.

In some of my articles earlier this year I had highlighted the huge amount of idle liquidity across the Maltese financial system which had gradually started to filter into the capital market with a strong response to most of the new bonds available for public subscription over recent months. Apart from the sizeable appetite for fixed-income instruments, we also witnessed a huge response from the investing public to the share issue by APS Bank plc. 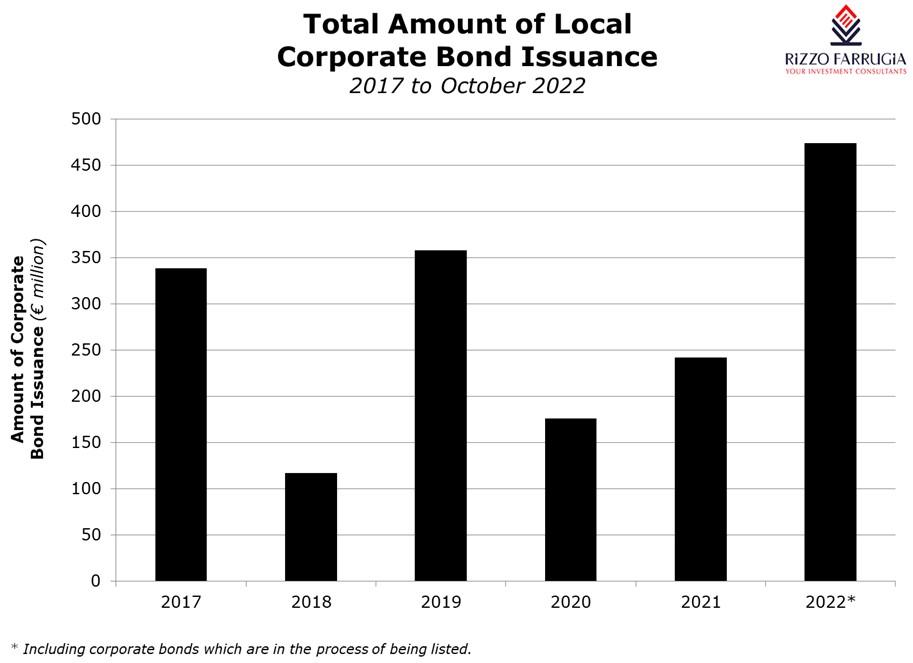 In a similar vein, the retail investing public responded with enthusiasm towards the recent 10-year Malta Government Stock offering as an amount close to €300 million was reportedly snapped up thereby crowding-out institutional investors from participating through an auction. This strong take-up was also brought about by the sudden and sharp increase in yields as the most recent MGS offering at 4% was substantially above a similar 10-year MGS offer during the summer at only 2.7% which was not well-received by both retail and institutional investors.

As a result of the spike in yields in a very brief period, it would be interesting to gauge the feedback and resultant appetite from retail and institutional investors to the new corporate bonds being issued. While 2 of the 5 upcoming issuers (namely JD Capital and Von der Heyden Group Finance plc) have already confirmed the interest rate on the new bonds, the other three issuers have yet to disclose the final terms of the bond offering. Undoubtedly, pricing a new bond issue in current circumstances following the MGS issue at 4% and with the European Central Bank widely expected to confirm further rate hikes in the coming months is no easy task.

However, within this context, it is worth pointing out that the yields across the eurozone bond market that change on a daily basis normally already factor in future interest rate hikes. In fact, while it may be premature to conclude whether sovereign bond yields across the eurozone have peaked already, current expectations of a median poll of various analysts interestingly forecast eurozone bond yields (represented by the benchmark German bund) to be lower within the next 12 months compared to current levels at circa 2.30% for a 10-year bond.

Coupled with this uncertain environment on the future trajectory on yields, the new corporate bonds being issued are also competing against additional MGS issuance planned by the Treasury. In this respect, the Treasury have not yet confirmed whether the additional MGS issuance planned for November 2022 will be open to both categories of investors or whether it would be restricted to institutional investors via an auction process for a minimum of €500,000 nominal. The market requires clarity in this respect to assist retail investors in their decision-making process as a wide variety of fixed-income instruments become available shortly. Within this context, the updated Financial Estimates published earlier this week by the Ministry of Finance as part of the 2023 Budget Speech indicate that a total of €1.6 billion in new MGS is required during 2023 to finance the budget deficit and the government bonds being redeemed next year.