The Financial Estimates published by the Ministry of Finance last week together with the Budget Speech provide key data on the state of the Government’s finances as well as on the economic projections over the next three years to 2025.

As a result of the sizeable deficits over recent years, the overall public debt is expected to amount to €9.3 billion by the end of 2022, which is equivalent to 57% of GDP. This is a very important metric used by international credit rating agencies when assessing the risk profile of any country.

As I had commented in an article last year on the state of the Government’s finances, Malta entered the pandemic from a position of strength as the debt to GDP ratio had dropped to 43% in 2019. As such, despite the very significant assistance provided to selected economic sectors during the pandemic coupled with the sharp drop in GDP, the increase in the debt to GDP ratio was sustainable especially in the context of a comparison to the debt metrics of many other countries across the eurozone. The average debt to GDP ratio of eurozone states as at the end June 2022 stood at just above 94%. It is possibly within this context that the Government of Malta immediately confirmed earlier this year that it will be providing significant energy subsidies (amounting to over €600 million in 2023) in order to control the level of inflation.

In fact, in the coming years, although the overall level of public debt will continue to increase reaching an estimated €11.9 billion by 2025, as a percentage of GDP, this is equivalent to 60% of GDP.

The investing public may be interested to note that the substantial rise in total Government debt will undoubtedly entail issuance of significant amounts of new Malta Government Stocks in order to finance the budget deficits as well as the maturing bonds over the coming years. In this respect, the Financial Estimates indicate that apart from an imminent issue of €370 million by the end of 2022, a total of €1.6 billion in new MGS issues is required in 2023 followed by a further €1.3 billion in 2024 and €1.25 billion in 2025.

The Financial Estimates also indicated that the overall amount of outstanding MGS in issue will rise substantially from €7.1 billion in 2022 to €10.1 billion in 2025. The sharp increase in yields this year will essentially translate into a significant increase in the debt servicing requirements (with interest costs rising from €173.5 million in 2022 to an estimated €300 million in 2025). On a positive note, however, the higher yields are igniting enthusiasm once again among the retail community as was amply evident last month with just over €293 million in new MGS’s taken up by over 10,000 applicants. 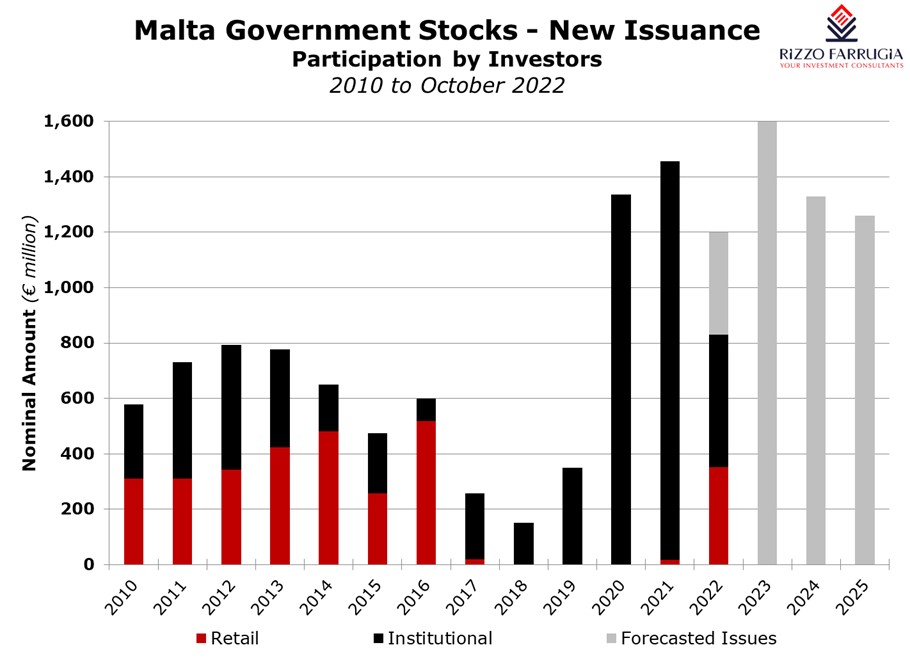 This elevated appetite by retail investors will hopefully be sustained in the near term as well as in the coming years in order to ensure that there is sufficient demand for the sizeable amounts of new MGS’s needed to finance both the annual deficit as well as the upcoming MGS redemptions which are sizeable every year until 2032. An important consideration is that the overall amount of MGS’s held by ‘resident households’ declined drastically during the 5-year period from 2017 to 2021 according to data available from the Central Bank of Malta. The amount of MGS’s held by ‘resident households’ dropped from 31.7% of total outstanding MGS’s in December 2014 to 10.8% in December 2021 which equates to a decline of circa €840 million to a total of €717 million.

The sharp decline could be due to a number of factors. Primarily, this may be as a result of the sizeable increase in MGS prices mainly between 2014 and earlier this year which encouraged numerous retail investors to capitalise on the strong gains and reduce their exposure to Maltese sovereign bonds. Secondly, there were no MGS offers available to retail investors between February 2017 and July 2021 with new issuance during this period aimed at institutional investors apart from the 62+ Government Savings Bonds totalling €100 million annually. Moreover, the decline in MGS’s held by retail investors is also undoubtedly as a result of the sizeable amount of MGS’s maturing annually that were held by retail investors and not reinvested in a subsequent issue.

In essence, the sharp increase in yields which has started to attract investors to shift part of their idle bank deposits back into the capital market coupled with the reduction in MGS holdings over the years will hopefully generate sufficient appetite from retail investors to increase their sovereign bond exposure to partially satisfy the significant new issuance which will take place annually until 2025 and beyond. It is evident that with maturities of MGS’s of between €356 million and €670 million annually over the next 10 years, we are undoubtedly entering a period of heightened issuance in the coming decade which is far higher than that seen in the period prior to the pandemic.