This week marks the first anniversary of a major turning point in the fight against the COVID-19 pandemic and the start of the economic recovery from the sharp setback at the start of 2020. On Monday 9 November 2020, Pfizer and BioNTech had announced that their vaccine was more than 90% effective in preventing symptomatic cases of COVID-19. This major announcement fuelled optimism that the pandemic could come to an end sooner rather than later and the UK became the first country in the world to authorise emergency jabs to its citizens on 2 December 2020 followed by the US on 11 December 2020. As the news of the very strong efficacy results by Pfizer and BioNTech was released, there were sharp upward movements across the main international equity markets.

Some European indices immediately climbed by nearly 10% and US equities also advanced with share prices of airlines, banks as well as cinema operators to name a few registering the strongest gains compared to other economic sectors. Moreover, the price of oil surged by more than 9% on the prospect of heightened demand once economies were expected to begin to reopen from the strict lockdowns imposed earlier on in the year. As a result of the very important announcement by the two vaccine developers and the immediate response by the equity markets, 9 November 2020 became known as ‘vaccine Monday’. Incidentally, the following Monday, the biotech company Moderna revealed that in a late-stage clinical trial, its coronavirus vaccine was found to be 94.5% effective in preventing COVID-19 which continued to fuel optimism on the strength of these two vaccines and their ability to bring an end to the pandemic.

Although there were initial signs of scepticism on the speed at which these vaccines can be distributed across the world given their storage requirements, it had become evident that both effective vaccines were to be made available in the following months. This was an important milestone for an eventual economic recovery.

Since financial markets generally anticipate events, the rally experienced in early November 2020 was sustained well into the new year and throughout most of 2021 despite the occasional spikes in COVID-19 cases and the Delta variant over recent months.

Over the past twelve months, the main international equity markets rallied strongly to new record levels with the EURO Stoxx 50 rallying by over 36% and marginally outperforming the S&P 500 Index which gained just under 34% since vaccine Monday. Meanwhile, the NASDAQ Composite in the US gained 38.2%. Across the eurozone, France’s CAC40 surged by nearly 42% closely followed by Italy’s FTSE MIB Index (+41.2%). The UK’s FTSE 100 Index was a relative underperformer as it ‘only’ gained 23.6% over the past 12 months.

The performances across the different economic sectors depict a more interesting analysis of the manner in which the news of a successful vaccine was interpreted across financial markets. As the price of oil more than doubled over the past twelve months, it is not surprising to see the energy sector rank as the best performer within the sectors across the S&P 500 Index in the US. The financials sector was another very strong performer with a surge of just over 60% followed by information technology (+37.1%), real estate (+36.5%), and consumer discretionary (+32.3%).

Within the European markets, the banking sector was the strongest performer with an upswing of close to 70% followed by the automobile industry (+55.5%) and oil and gas (+52.9%).

Although the US and European markets posted exceptionally strong gains over the past twelve months, there were instances when equity markets had their periods of volatility especially when the Delta variant started to spread in a consistent manner and was widely seen as a potential threat to the economic recovery. Another factor that featured regularly among the risks to the continued rally across equity markets was the threat of hyperinflation.

Meanwhile, another piece of important news that once again came from Pfizer was announced last Friday and is yet again being seen as a further important step in the fight against the COVID-19 pandemic. 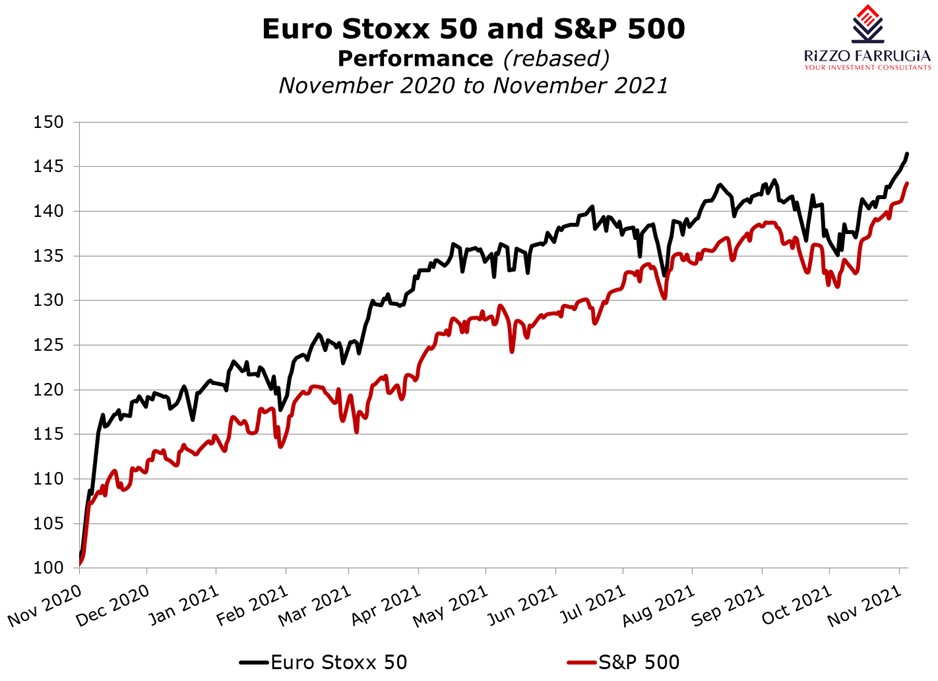 The US pharmaceutical giant announced that internal data showed that its oral COVID pill (when administered with a widely-used HIV drug) indicated an 89% reduction in the risk of hospitalization or death in adults who have been exposed to the coronavirus. This was hailed as a ‘game changer’ and the ‘end of the pandemic’ by some prominent commentators across the financial media. Pfizer indicated that it plans to seek authorisation from authorities for the widespread use of this treatment later on this month. International equity markets continued to rally strongly following this important news with the main beneficiaries being the ‘economic reopening shares’ most especially travel and tourism companies such as Airbnb. The upswing in the share prices of most companies within the travel and tourism sector was also due to the news that the US reopened its borders to vaccinated international travelers from 33 countries thereby ending a 20-month travel ban. Meanwhile, the ‘stay-at-home names’ that had rallied strongly in 2020 at the start of the pandemic fell out of favour more recently and their share prices declined further as the news from Pfizer indicated the return to normality may be even quicker than expected.

Some weeks ago, another antiviral COVID pill jointly developed by Merck & Co Inc and Ridgeback Biotherapeutics was shown to reduce the risk of hospitalisation and death from the virus by 50%. This was also hailed as an important step to end the pandemic. In fact, last Thursday the UK regulatory agency recommended the drug, ‘Molnupiravir’, for use in people suffering from mild to moderate COVID-19 symptoms. The UK’s approval was the first for an oral antiviral treatment for COVID-19 and the first for a COVID-19 drug that will be administered widely across the community. US advisers will be meeting on 30 November to review the safety and efficacy data of Molnupiravir and vote on whether this drug should also be authorized.

Although the future trajectory of international equity markets is always difficult to predict and will remain dependent on various factors (including the threat of hyperinflation and how this could be tackled by major central banks as well as global supply chain disruptions, the strength of company earnings and worries of an energy crisis), the scientific breakthroughs by the pharmaceutical and biotechnology companies around the world are providing a strong foundation for the economic recovery to be sustained in 2022 and beyond.

One of the very important lessons once again for the investing public over the past 18 months was to avoid succumbing to the short-term fear and uncertainty that engulfed the markets as certain events unfolded such as that seen at the start of the pandemic when equity markets tumbled aggressively in February and March 2020. Although equity markets will always produce shocks on a periodic basis, the long-term trajectory of equity markets has proved that owning shares in good quality businesses is the most profitable way of growing one’s wealth into retirement age.