In my article published on 30 June reviewing the developments across various asset classes during the first half of the year, I highlighted the significant setback suffered by the Malta Government Stock market. Most MGS’s posted strong double-digit declines reflecting similar price drops across international bond markets as bond yields moved sharply higher.

I had also explained that such sharp moves across sovereign bond markets took place amid spiralling inflation figures and subsequent monetary policy tightening measures by the major central banks.

Since the publication of my article on 30 June, there were equally spectacular moves over the past two months across the international bond market which were also reflected in the MGS market. These sharp movements are worth detailing for the investing public especially since this asset class is not normally synonymous with such high levels of volatility.

This volatility can easily be depicted by tracking the price movements of the new 10-year MGS issued by the Treasury in the first half of July. The 2.9% MGS 2032 was also the most popular among retail investors as it attracted demand totalling €23.3 million (nominal).

The Treasury had offered this 10-year bond at a price of 101.75% giving a yield-to-maturity (YTM) of 2.7% per annum. Shortly after trading commenced on the secondary market during the last week of July, the indicative bid price quoted by the Central Bank of Malta immediately moved higher and reached a level of 105.07% on 2 August with the corresponding YTM declining to 2.34%. This was reflective of the downward movement in yields across the eurozone with the German benchmark 10-year yield dropping sharply to 0.7% on 2 August compared to a high of 1.8% in mid-June. Such a move coincided with a meeting of the US Federal Reserve on 15 June when Chairman Jerome Powell stated that the central bank can still achieve a “soft landing” by bringing down inflation without causing a recession and high unemployment. Moreover, there were indications from data released in the US that inflation is steadying and this may reduce the need for more aggressive interest rate rises from the Federal Reserve.

However, over the past four weeks, the yield on the German benchmark 10-year yield doubled to 1.57% as sovereign bond prices tanked on further evidence of higher inflationary pressures across the eurozone and further decisive action being taken by the major central banks. In fact, the price of the 2.9% MGS 2032 dropped to 98.29% last Thursday 1 September which translates into a YTM of 3.10%. Incidentally, the current pricing is similar to that tendered by institutional investors on 15 July with a weighted average bid price of 99.20% (YTM 2.99%). It is worth reiterating that the 10-year MGS yield stood at 0.75% at the start of the year.

These sharp movements across the bond markets are taking place within the context of extreme developments unfolding across most major economies prompting further actions by central banks. The eurozone inflation reading surged to a record high of 9.1% during the month of August thereby supporting claims from various economists and financial commentators to speculate on a further rate hike of 0.75% by the European Central Bank during today’s meeting. 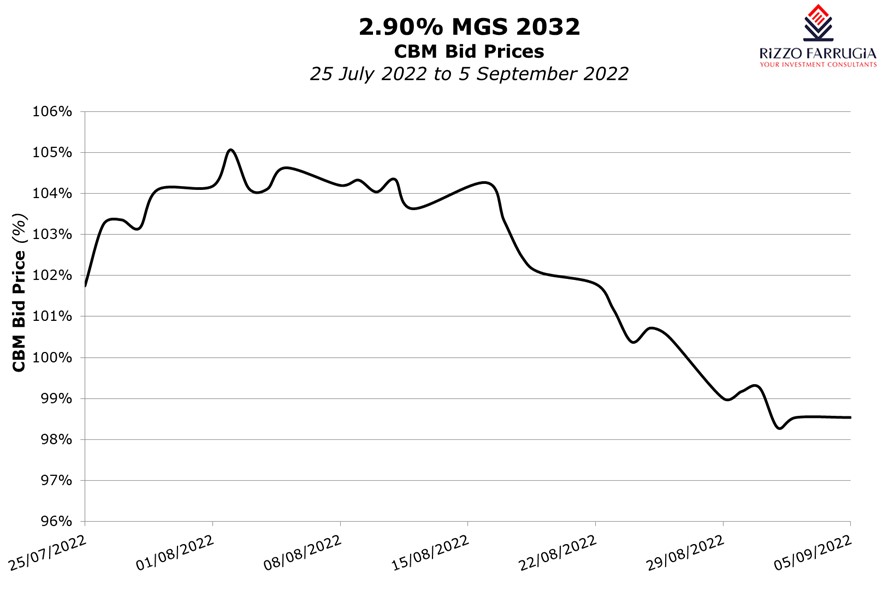 The ECB had raised its deposit rate by 0.5% in July to its current level of zero and one of the ECB members recently argued that the bank would be willing to raise borrowing costs even further to stem inflation despite the inevitable impact to employment figures and to a possible recession.

The alarming developments across the energy sector are fuelling added inflationary expectations. Wholesale energy prices soared to all-time highs in Europe last month and although they retreated in recent days, German power prices were still about 10-times higher than the level at this time last year. Energy prices jumped again earlier this week after the Kremlin warned that gas supplies to Europe would not resume until the economic sanctions imposed since the start of the war in February are lifted.

The sharp decline in the euro is also exacerbating the inflation problem through higher prices of imports, especially energy. Earlier this week, the euro dropped to below the USD0.99 level against the US Dollar for the first time since 1999. This development together with the news regarding the threat to the supply of gas is supporting some commentators to speculate that inflation will also spike to double-digit levels in the eurozone by the end of the year.

If this were to happen, the ECB would need to continue raising interest rates. An international economist interviewed across the media opined earlier this week that the ECB could raise the deposit rate to 1.75% by the end of 2023 compared to a level of 0.75% if the bank were to proceed with the expected rate hike today.

These actions by major central banks will undoubtedly continue to have a strong bearing on movements across the sovereign bond markets as well as currencies. Inevitably, the ongoing impact of the war in Ukraine will continue to impinge on such economic developments and the performance of all asset classes in the months ahead.