The two new Malta Government Stocks (MGS) that were on offer to retail investors in the early part of last week attracted significant demand that brought back memories of the strong appetite for local sovereign bonds several years ago.

The Treasury announced last Wednesday that during the three-day offer period between 10-12 October, subscriptions from retail investors amounted to just below €300 million and the over-subscription option was exercised thereby satisfying all retail applications in full.

As had been indicated in some of my articles over recent months, there was an evident build-up of excess savings by retail investors across the local banking system over the past few years. As the Treasury announced the pricing of the 10-year bond at 4%, the reaction from retail investors was immediate. Investor psychology played an important role in the dynamics of the take-up since rates had been at very low levels for a long number of years and therefore the 4% level was deemed to be attractive. In fact, the yield on a 10-year MGS had last reached the 4% level exactly ten years ago in October 2012! When reviewing the movements in yields, the most remarkable outcome is the extent of the increase in such a short period of time. During the last MGS issue only 3 months ago, the 10-year MGS (the 2.9% MGS 2032) was offered at a yield of 2.7% while at the end of 2021 (only 10 months ago), the yield on a 10-year MGS was a mere 0.7%. The sharp increase in rates in such a short period of time mobilised a significant amount of idle liquidity across the banking system as the opportunity cost of holding onto excess savings is now meaningful especially in the current inflationary environment.

Some investors may be surprised at the extent of the steep hike in yields over recent weeks. This is in part due to interest dynamics internationally following a shift in policy by the major central banks including the European Central Bank (ECB) which already raised its deposit facility rate by 125 basis points to 0.75% over the past three months. However, it also transpires that there was a significant widening in the credit spread of MGS over German government bonds which are the ‘risk-free’ benchmark for the eurozone area. In fact, the 10-year MGS yield of 4% in last week’s offering represented a premium of 180 basis points over the benchmark German Bund compared to a premium of 90 basis points at the end of 2021.

In my view, there is no particular justification for the doubling of the premium priced into MGS over recent months. This is not a case of deteriorating economic fundamentals as the Malta Government’s debt-to-GDP ratio is projected to remain at an acceptable level of close to 60% (which is considerably lower than the euro area average of around 95%) despite the huge energy subsidies also projected for 2023. Moreover, most recent reports by the international credit rating agencies confirm the reassuring position of the Government’s fiscal position.

The additional premium imputed into the MGS market over recent months could be posing problems for the local corporate bond market at a time when a significant amount of issuance is expected to take place by the end of the year. Investors may continue to expect a similar premium (interest rate differential) between corporate bonds and MGS similar to that over the past several years which is misleading given the widening spread between MGS and the eurozone area during the course of this year. 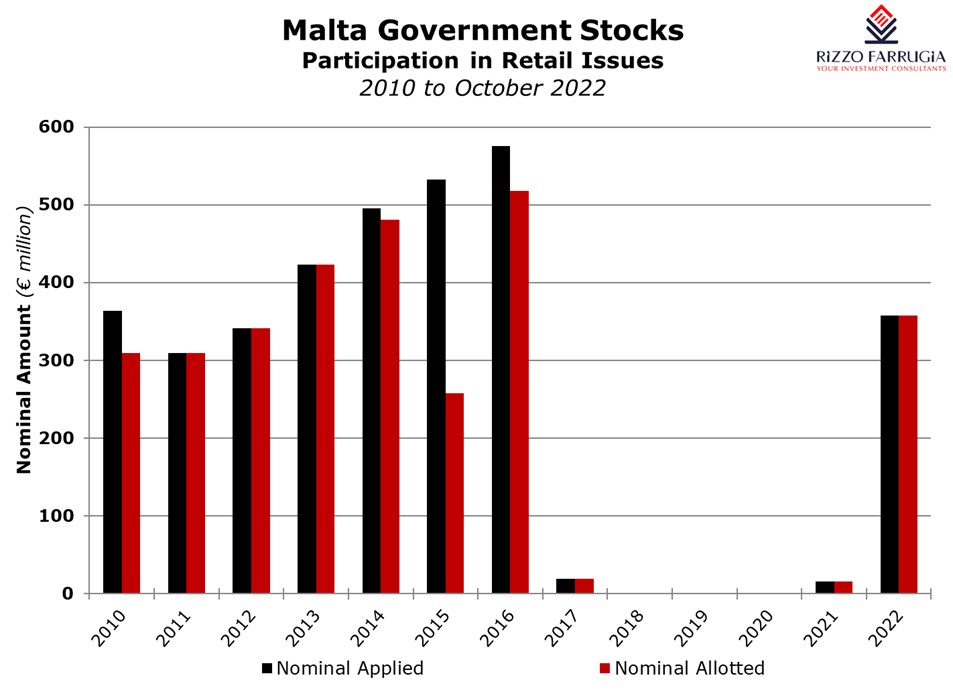 Within the context of the results of last week’s take-up, it is interesting to note that this marked a new record of the highest amount allotted to the general public in a single set of issues at just under €300 million, compared to the previous record of €200 million in February 2016 (mainly in the 2.5% MGS 2036). When looking back at some statistics over the last couple of years, other important details emerge. The absolute record number of MGS applications by retail investors took place in March 2015 (the 3% MGS 2040) when 11,028 applications were submitted for a record of €443.1 million. However, only €168.3 million were allotted at the time. The highest annual amount raised (allotted) from the general public was in 2016 at €517.9 million. As yields declined rapidly thereafter to a low of 0.109% in August 2019 for a 10-year MGS, there were no MGS offers targeted to retail investors between February 2017 and July 2021 although the Government raised €100 million for five consecutive years between 2017 and 2021 in Malta Government Retail Savings Bonds targeted to pensioners.

The strong take-up by retail investors (up to a maximum of €100,000 nominal per applicant) last week resulted in the cancellation of the auction for institutional investors. The crowding-out by retail investors for an MGS offer is also not a new phenomenon and was a common occurrence between 2010 and 2017. As a result of the strong take-up by retail investors, the Treasury also announced last week that another MGS issuance will take place in mid-November 2022. In this respect, it would be important for the Treasury to confirm whether this upcoming issue will be open to both categories of investors or whether it would be restricted to institutional investors via an auction process for a minimum of €500,000 nominal.

Given the elevated level of MGS issuance also expected next year and beyond, it would be fruitful for the Treasury to engage into discussions with market participants to discuss any changes that may be necessary in order to make the application process for retail investors more effective. For example, a longer offer period beyond the current 3-day schedule would be welcome especially in the light of the very different regulatory landscape compared to the situation over 8 years ago when such MGS’s were in strong demand by thousands of retail investors.