One of the dominant themes across financial markets over recent weeks and months was the relentless strength of the US Dollar compared to most other major currencies foremost of which the euro and the British pound.

In fact, both the euro as well as the British pound have recently slumped to fresh multi-decade lows against the US Dollar. Such currency movements must be of interest to many Maltese investors who have exposure to both the US Dollar and Sterling as part of a diversified portfolio of investments.

Meanwhile, against the euro, the British pound has only lost 3.3% this year but has performed much weaker since the Brexit referendum in 2016 with a decline of over 13%. On its part, the euro weakened by almost 11% against the US Dollar during the course of 2022 and suffered a decline of 20% over the past 10-years.

Despite the sharp decline in the value of Sterling and euro against the US Dollar to multi-year lows, many international economists and investment banks believe that the two currencies could weaken even further in the months ahead.

The pound’s sharp slide reflects not only an element of the strength of the US Dollar but mounting concerns over the UK’s economic outlook. Inflation in the UK is at a 40-year high, with the consumer price index hitting 10.1% in July amid Britain’s worst cost-of-living crisis in decades (as food and energy prices soar) despite a series of six consecutive rate hikes by the Bank of England over recent months in order to tame inflation. Although the Bank of England recently projected a peak of 13.3% in the inflation rate before the end of 2022, a leading investment bank recently opined that the inflation rate in the UK could hit over 20% in the first quarter of 2023.

The recently appointed Prime Minister Liz Truss is facing a very challenging economic environment and her proposed tax cuts, the energy relief plan as well as a pledge to review the Bank of England’s mandate have led to increased nervousness across foreign exchange market.

In essence, the eurozone and the UK economies are facing the same external shock and the energy crisis arising from Russia’s war in Ukraine which is now widely expected to push both economies into a recessionary period. In contrast, some economists still believe that the US economy may avoid a recession at least in 2022 given its relatively stronger economic position and energy independence.

Apart from the war, the single currency block is also suffering from the adverse effects of high inflation which is also the result of the weak euro especially when it comes to the importation of energy (namely oil and gas) traded in US Dollar. Indeed, inflation across the euro area climbed to 9.1% in August (the sharpest rise in more than 40 years) compared to the same month in 2021. 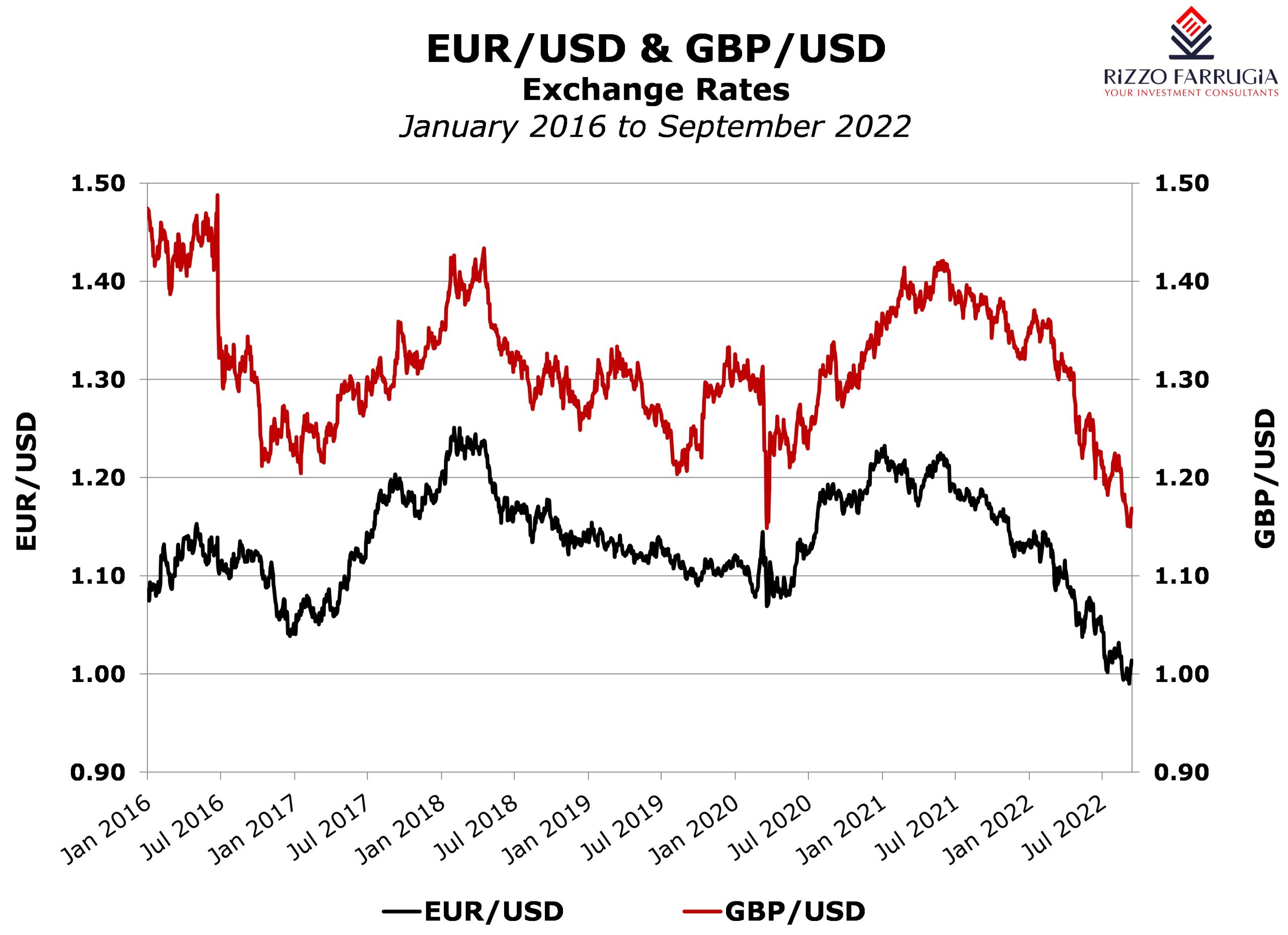 A key determinant on the performances of currencies in the months ahead is the monetary policy stance of the respective central banks. The Bank of England is expected to be more aggressive than the European Central Bank in upcoming interest rate hikes. If this were to be the case, then Sterling’s recent weakness versus the euro might soften. On the other hand, the US Federal Reserve is likely to continue with its aggressive strategy of monetary policy tightening in the coming months (with a further 75 basis point hike anticipated on 21 September) despite the jump in the target range for the federal funds rate from zero to 0.25% last year to between 2.25% and 2.5%. The Bank of England has hiked rates from a low of 0.1% last year to 1.75%, while the ECB’s deposit facility rate is still at a mere 0.75%. In view of the continued hawkishness by the Federal Reserve and the higher rates relative to those across the UK and Europe, it is unlikely that this will lead to a period of a sizeable recovery in both currencies against the USD.

A strong dollar is naturally detrimental for US exporters as profits denominated in euros or Sterling will appear weaker when translated into a lower amount of dollars. In fact, during the publication of the Q2 results over recent weeks, companies such as Microsoft Inc, Nike Inc and Johnson & Johnson all mentioned the negative impact arising from the strength in the US Dollar.

On the other hand, the weak euro and Sterling is beneficial to those companies heavily dependent on exports such as the German automobile companies and many companies forming part of the FTSE 100 share index. However, the German auto companies for example also face various other headwinds such as an economic slowdown in the US, China and other important economies; a recessionary environment in Germany and other key markets; a spike in electricity prices as well as continued supply chain issues.

As indicated in last week’s article, the monetary policy decisions and statements by the major central banks will continue to have a strong bearing on movements across various asset classes as well as currencies.