In last week’s article I highlighted a number of important lessons that emerged from the annual letter of Warren Buffett, the Chairman and CEO of Berkshire Hathaway.

The letter also included details of a 10-year bet he made with Protégé Partners in December 2007 that the S&P 500 would outperform a basket of hedge funds.

The more interesting aspect of the bet was an important decision that Warren Buffett made in 2012 which enabled him to grow his outlay of USD318,250 into USD2.2 million.

In 2007, both parties to the bet (Warren Buffett and Protégé) each purchased USD500,000 nominal in zero-coupon US Treasury bonds at a cost of USD318,250 since the bonds (which do not pay an annual interest but which mature at par similar to the Malta Government Treasury Bills) were priced at just below 64%. At the time, if the bonds were held until maturity, the investments would have generated an annual return of 4.56%.

In the 2017 annual letter to Berkshire Hathaway shareholders published on 24 February 2018, Warren Buffett stated that “After our purchase, however, some very strange things took place in the bond market. By November 2012, our bonds – now with about five years to go before they matured – were selling for 95.7% of their face value. At that price, their annual yield to maturity was less than 1%. Or, to be precise, 0.88%”. The Chairman and CEO of Berkshire Hathaway added that “Given that pathetic return, our bonds had become a dumb – a really dumb – investment compared to American equities.”

Warren Buffett noted that at the time in 2012, the annual dividend yield of the S&P 500 was 2.5%, almost triple the yield of the Treasury bonds.

In view of what he termed as “the extraordinary valuation mismatch between bonds and equities”, both parties to the bet agreed to sell the bonds in 2012 and purchase shares in Berkshire Hathaway.

Warren Buffett admitted that Berkshire Hathaway did not perform brilliantly since 2012. However, he acknowledged that he did not need an extraordinary performance to beat the annual yield of only 0.88% on the bond.

He then added that in 2012, the ‘risk-free’ return on a US Treasury bond was a far riskier investment than a long-term investment in shares. In fact, yields on US Treasuries have increased since then (bond prices declined) in view of the stronger economic growth and the gradual hike in interest rates by the Federal Reserve. The benchmark 10-year US Treasury yield has recently touched a 4-year high of 2.9%.

The comparison that Warren Buffett made between the yield on the bond market and the average yield across the equity market can also apply across Europe including Malta.

The 10-year German bund is currently at just below 0.7% per annum and has recovered strongly from the level of 0.43% at the end of 2017 and a historic low of minus 0.20% in July 2016. In contrast, many well-known European companies offer dividend yields at well above this paltry return. By way of example, last week BMW AG published its 2017 financial statements and declared that it will be proposing a dividend of €4.00 per share (a record dividend which represents an increase of 14% over the prior dividend) and which equates to a yield of 4.7% – a substantial premium to the yield on the 10-year German government bond.

GO plc published its 2017 annual financial statements on Tuesday 6 March and a final net dividend of €0.13 per share is being recommended for approval at the Annual General Meeting. This is 18.2% higher than the previous dividend and those shareholders as at close of trading on 11 April 2018 are entitled to receive this dividend. GO shares are currently offering a net dividend yield of 3.6%. 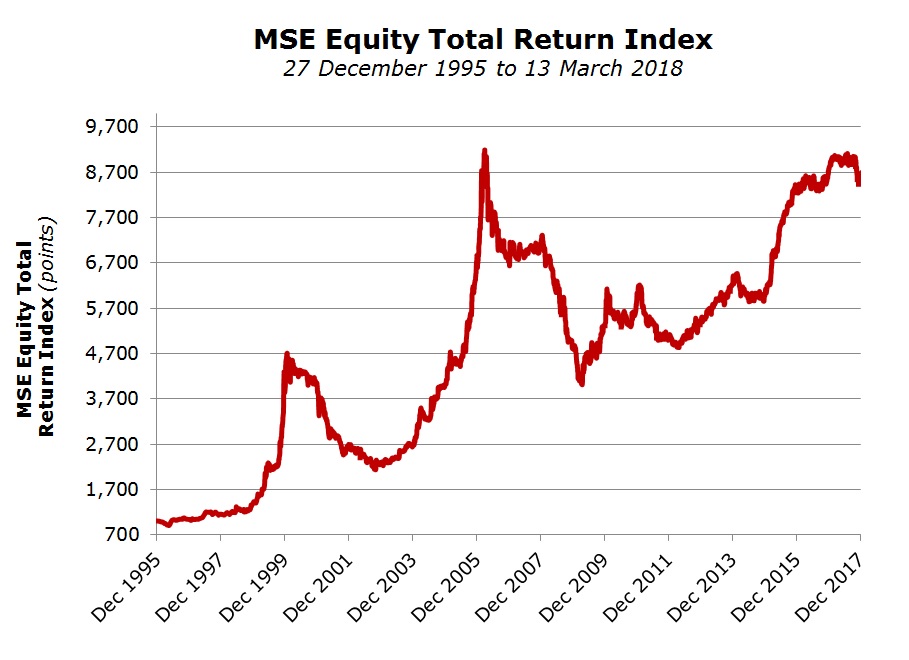 The 2017 financial statements of Malita Investments plc were boosted by the positive movement in the fair value of investment property of €16.7 million. A final net dividend of €0.01853 per share is being recommended for approval at the Annual General Meeting to all shareholders as at close of trading on 26 March 2018. Coupled with the interim net dividend of €0.0092 per share paid in September 2017, the company’s total net dividend distribution for 2017 amounts to €0.02773 per share which represents an increase of almost 20% over the previous year. The net dividend yield of Malita is 3.4%.

The Mapfre Middlesea Group reported a 52% increase in pre-tax profits to €17.7 million and a final net dividend of €0.1054 per share is being recommended for approval at the Annual General Meeting to all shareholders as at close of trading on 25 April 2018. This represents a significant hike compared to last year’s dividend of €0.0383 per share and gives a net dividend yield of 5.6% based on the current market price of €1.90.

There are various other companies that offer more attractive dividend yields to shareholders when compared to the very low yields prevailing on Malta Government Stocks. Following the publication of financial results and dividend announcements by these companies in recent weeks, investors are now eagerly awaiting the 15-month financial statements of Bank of Valletta plc and news on BOV’s dividend policy following the €150 million rights issue late last year. Moreover, within the same segment of Malita Investments plc (property companies with high dividend payout ratios), Plaza Centres plc and Tigne Mall plc will shortly be publishing their financial statements and issuing their dividend recommendations.

The financial statements published by various companies listed on the Malta Stock Exchange are showing a marked increase in profitability on the back of the strong economic performance of the Maltese economy which is also being remarked upon by the various international credit rating agencies. The continued momentum in economic growth should enhance profitability in future years and provide companies with an opportunity to continue to reward shareholders accordingly with attractive dividend payments.

In October 2012, I had published an article titled ‘Lifestyling an investment portfolio’ in which I explained the concept that as investors age, there is a general tendency for an increased allocation towards bonds and a lower allocation to equities. However, I had also highlighted that there should be an element of equity exposure in portfolios even for income-oriented investors as inflation reduces the purchasing power of bonds which offer a fixed rate of interest.

Similar to the decision made by Warren Buffett in 2012, many Maltese investors should consider whether they are over-exposed to bonds and whether they can also obtain attractive and sustainable dividends from various equities. The MSE Total Return Index, which measures the total return for investors via capital growth from equities and dividend returns, generated an average annual increase of over 10% since 1996. This very strong return should encourage investors to consider added exposure to the equity market at a time of unprecedented economic growth in Malta.