The Deutsche Börse Group, the operators of the DAX (Germany’s main stockmarket benchmark), announced a number of changes to the DAX 30 some months ago which were introduced as from last Monday 20 September.

Essentially, the DAX expanded from 30 to 40 of the biggest public companies by market capitalisation listed on the Regulated Market of the Frankfurt Stock Exchange. With just 30 members, it was one of the smallest blue-chip indices in Europe, compared with the 40 constituents in both Italy (the MIB 40 index) as well as France (the CAC 40 index) and 100 members in the UK’s FTSE 100.

Apart from the increase in the number of companies, the new criteria for entry into the DAX include a profitability requirement. In other words, in order to be eligible, companies will have to post two years of positive earnings before interest, taxes, depreciation and amortisation (EBITDA).

Moreover, all companies forming part of the DAX index are required to publish audited annual financial reports and quarterly statements. After a 30-day warning period, failure to comply will result in immediate exclusion from the index. Another change is that index companies within the entire Regulated Market of the Frankfurt Stock Exchange are eligible for inclusion while previously it only included companies from the Prime Standard segment which are required to adhere to a higher set of transparency standards.

The overhaul comes as German regulators seek to avoid a repeat of the supervisory failures that resulted in the former European payment processor giant Wirecard into accounting fraud as regulators failed to spot €1.9 billion of “missing” cash. The outcome of this regulatory oversight was the bankruptcy of Wirecard in June 2020 as the company became the first member of the DAX to ever go bust after only two years from being promoted to the benchmark German blue-chip index.

By comparison, investors in the FTSE 100 would have generated a similar performance while those in the S&P 500 would have benefited from an average return of 11% per annum including dividends over the same period.

Over the years, the composition of the DAX evolved from being heavily weighted towards banks and chemical companies to a broader mix of automakers, industrial groups and pharmaceutical companies. However, there was only one pure software company in the DAX 30 which was SAP AG. This was possibly one of the main reasons for the relative underperformance of the DAX in recent years when compared to the S&P 500 in the US.

Within the DAX 30, the largest constituents before the changes took place last Monday were SAP (10.1% weighting), followed by Linde (9.2%), Siemens (8.6%), Volkswagen (8%), Deutsche Telekom (5.6%), Allianz (5.3%), and Daimler (5.1%). Essentially, the 7 largest constituents represented just over 50% of the index. Moreover, it is also interesting to note that half of the 30 constituents registered double-digit gains so far in 2021 with Deutsche Post AG and Merck KGaA leading the performance table with gains in excess of 40%.

Curiously, the aeroplane manufacturer Airbus had originally been excluded from the DAX 30 due to the low volumes of shares traded on the Frankfurt stock exchange as opposed to the higher liquidity from its listing in Paris. 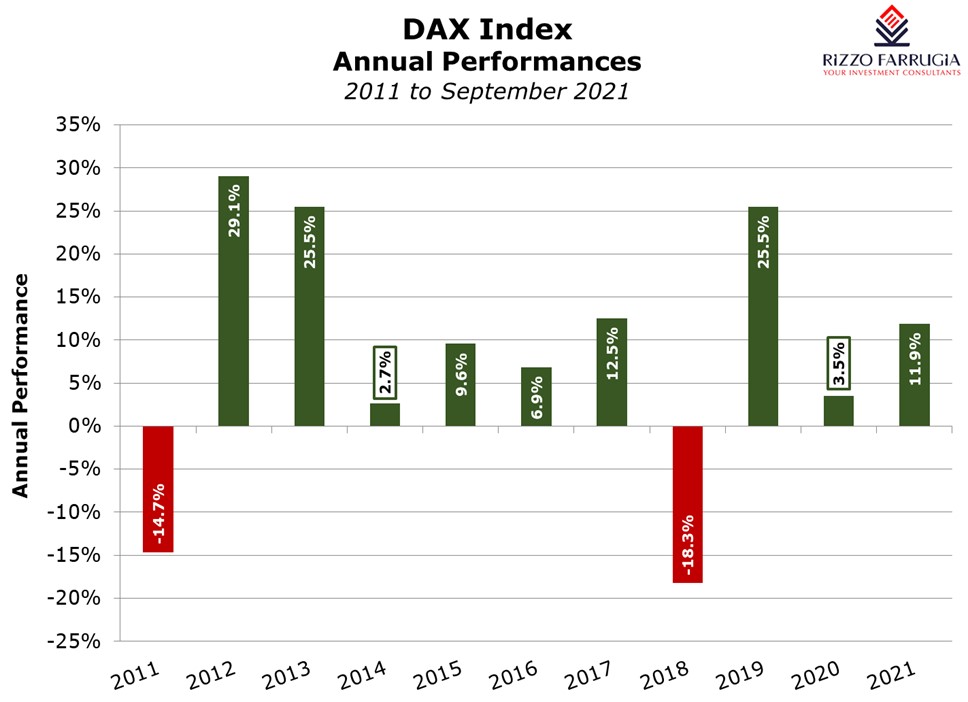 Meanwhile, Porsche SE is the investment vehicle that owns a majority of Volkswagen AG and therefore its performance will be largely linked to that of Volkswagen.

Siemens Healthineers is a manufacturer of medical devices that went public in 2018 after being spun off by parent company Siemens. It recently acquired US radiation therapy powerhouse Varian for circa USD16 billion.

Qiagen has been in the limelight over the past 18 months due to a huge demand for its portfolio of Covid test kits as well as its technologies for detecting new coronavirus variants.

Sartorius is a 152-year-old laboratory equipment maker whose bioreactors are used by messenger RNA Covid-19 vaccine manufacturers. Another very old established company is the chemicals distributor Brenntag which was founded 110 years ago.

On the other hand, the online fashion retailer Zalando is a much younger company having been set up in 2008 but yet grew into a market capitalisation of almost €25 billion.

Following the enlargement of the index the sectoral composition has somewhat changed with ‘Health Care’ and ‘Industrials’ being the only net beneficiaries at the expense of all other sectors. In fact, the weighting of the ‘Health Care’ and ‘Industrials’ sectors increased to almost 15% and 11% respectively compared to 9% and 6.7% prior to the change in the index, reflecting in the inclusion of Qiagen, Siemens Healthineers and Sartorius within ‘Health Care’, and Airbus within ‘Industrials’. On the other hand, the most diluted have been ‘Financials’, ‘Technology’ and ‘Basic Materials’ as each one of these sectors lost more than 2 percentage points in its weighting in the index.

The changes to the DAX had mixed reactions from financial markets commentators. Some argued that the larger index means greater diversification and potentially more stability for investors since weightings of individual companies are now less pronounced. Others, however, opined that deeper changes are required to create an equity market fit for Europe’s largest economy. In fact, these same critics believe that the US indices remain more attractive than their European counterparts because they have a much higher portion of companies operating in industries based on innovation such as technology and communication.

One of the easiest ways for investors to gain exposure to the overall German stock market without resorting to individual stock-picking is via an Exchange Traded Fund. A number of the larger ETF providers have such products available enabling investors to gain access to some of the largest companies across the eurozone.