In last week’s article I made reference to an important leverage ratio that analysts and investors should consider when assessing the financial strength and soundness of a company before contemplating an investment in bonds.

The debt to asset ratio, also known as the debt ratio, indicates the percentage of assets that are being financed by debt. The higher the ratio, the greater the degree of leverage and financial risk of a company while a lower ratio is a more desirable one since it indicates a lower degree of financial risk. The debt to asset ratio is an important metric for most companies listed on the Malta Stock Exchange given the sizeable amount of property assets held by a large number of Maltese companies.

Apart from portraying the strength of the Mizzi Organisation through this financial ratio, it is also important to gauge how other Maltese bond issuers fare in this context. As such, the debt to asset ratio was calculated for all companies (excluding the banks and insurance companies) whose bonds are listed on the Regulated Main Market of the MSE.

The ranking indicates that Plaza Centres plc has the strongest debt to asset ratio with a figure of 0.2 times as at the end of 2020. Plaza sold one of its properties in September 2020 and the financial statements as at 31 December 2020 indicate overall debt of €7.7 million (representing the bonds issued in 2016) and assets of just under €39 million. 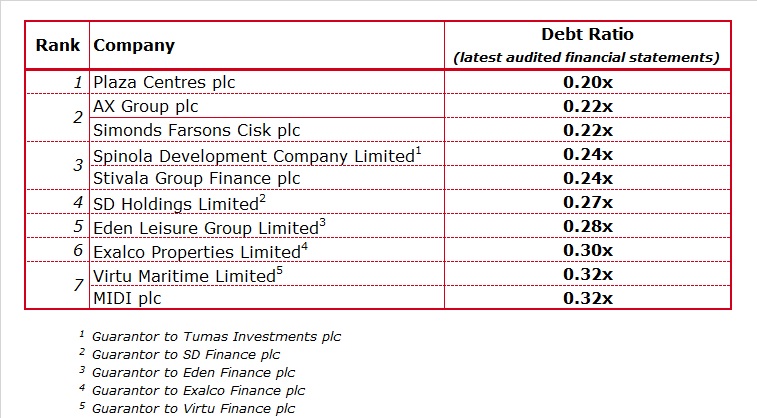 The largest non-financial corporate bond issuer in Malta is International Hotel Investments plc with total bond issuance of €225 million. IHI has a strong portfolio of property assets in various countries and although the absolute level of debt at €644.9 million as at the end of June 2021 is far higher than all other companies, the debt to asset ratio is also very strong and expected to be at 0.42 times this year. Incidentally, on 31 August 2021 IHI announced that it submitted an application to the Malta Financial Services Authority requesting admissibility to listing of unsecured bonds redeemable in 2031. The information that will be published by IHI should regulatory approval be obtained will enable analysts and investors to calculate updated financial ratios based on the projects being contemplated by the hospitality group of companies.

Another company that is shortly expected to also publish a prospectus is Hili Properties plc. However, the company will not be issuing another bond but instead it indicated that it is issuing new shares presumably to finance other property acquisitions overseas as indicated in a number of recent media articles. Hili Properties had overall debt of just under €80 million as at 31 December 2020 compared to total assets of €149.6 million thereby resulting in a debt to asset ratio of 0.53 times. Hili Properties is a subsidiary of Hili Ventures which is the guarantor of two bonds issued by Hili Finance Company plc. One of the bonds issued by Hili Finance (the €80 million that was issued in 2019) ranks as the largest corporate bond that ever took place in Malta. When analysing the total debt of Hili Ventures, one needs to distinguish between bank borrowings and bonds in issue as well as the value of lease liabilities which are included within total debt as per accounting rule IFRS16. Moreover, one would need to take into consideration the very strong EBITDA generation from its fully-owned subsidiary Premier Capital plc.

The debt to asset ratio calculated across the Maltese bond market provides evidence of the overall strength of a large number of the companies listed on the MSE. As an increasing number of companies utilise the capital market, investors as well as financial analysts will gain access to a significant amount of data, enabling them to compare companies within specific economic sectors which would be useful when deciding on which companies to gain exposure to within an overall investment portfolio.