In last week’s article, I provided an overview of the movements across major international equity markets since ‘vaccine Monday’ – i.e. the crucial day when Pfizer and BioNTech announced that their vaccine was more than 90% effective in preventing symptomatic cases of COVID-19. In my analysis, I explained how this critical development in the fight against the pandemic affected the performance of various equity indices as well as specific sectors in the context of the strong economic recovery across the globe that took place from the sharp setback at the start of 2020.

Another interesting observation covering the past twelve months is related to the value of the US Dollar against other major currencies. Indeed, it is worth recalling that until ‘vaccine Monday’, the US Dollar was performing negatively against most other major currencies. Despite the huge volatility across financial markets, since the start of 2020 until the first week of November 2020, the US Dollar had lost 7% against the Swiss Franc, 5.6% versus the Euro, almost 5% against the Japanese Yen, and over 3% versus the Australian Dollar. In addition, the ICE US Dollar Index, which is a leading benchmark for the value of the US Dollar relative to a basket of other currencies, had lost 4.3% during the same period. On the other hand, the US Dollar gained nearly 1% against the Pound Sterling possibly reflecting the uncertainties that were still very evident at the time in relation to the ongoing negotiations between the UK and the European Commission on the terms of any potential Brexit deal.

In contrast to the superlative performance of many of the main equity indices as well as energy prices as explained in last week’s article, the Pfizer/BioNTech vaccine breakthrough did not translate into an immediate or broad rally for the US Dollar. Instead, the world’s reserve currency trended largely in negative territory against virtually all major currencies (except the Japanese Yen, and to some extent the Swiss Franc) between November 2020 (‘vaccine Monday’) and June 2021. However, the underlying dynamics of the US Dollar started to change as from the last week of May 2021 ahead of the US Federal Reserve monetary policy meeting which took place between 15 June and 16 June 2021. During the meeting, the US central bank signalled that it could raise interest rates in 2023, sooner than it had previously planned, on the expectation of further solid economic momentum gathering pace supported by the strong fiscal support by the Federal government which was also already translating into relatively high inflation rates. Indeed, despite the risks arising from the spread of the various COVID-19 variants across the world (in particular the ‘Delta’ variant), the improving situation in the US labour market and the accelerating consumer activity had already been signalling the more optimistic outlook which was also translating into excellent earnings reports by various US companies.

Amidst the higher expectations of an earlier tightening of monetary policy by the Federal Reserve, currency markets were quick to adjust to the evolving scenario. Since June 2021, the US Dollar gained 7.6% % against the Euro, over 5% versus the Pound Sterling and the Australian Dollar, whilst the US Dollar Index added more than 6% to the highest level since mid-July 2020. Similarly, the US Dollar gained over 4% against the Japanese Yen and the Canadian Dollar although it only advanced by 3% versus the Swiss Franc.

Given the turnaround in performance in recent months, many financial commentators are now asking whether this seemingly broad-based bullish trend in the US Dollar can continue further or whether these gains are not fundamentally strong enough to lift the US Dollar back to its levels at the start of 2020. In fact, despite the prevailing upward trend in the value of the US Dollar, since the start of 2020 the currency is still lower against all major currencies except the Japanese Yen (+5%). For instance, at the current rate of USD1.136 per Eur1, the US Dollar is 1.3% weaker against the single currency compared to the rate of USD1.12 per Eur1 at the end of 2019. 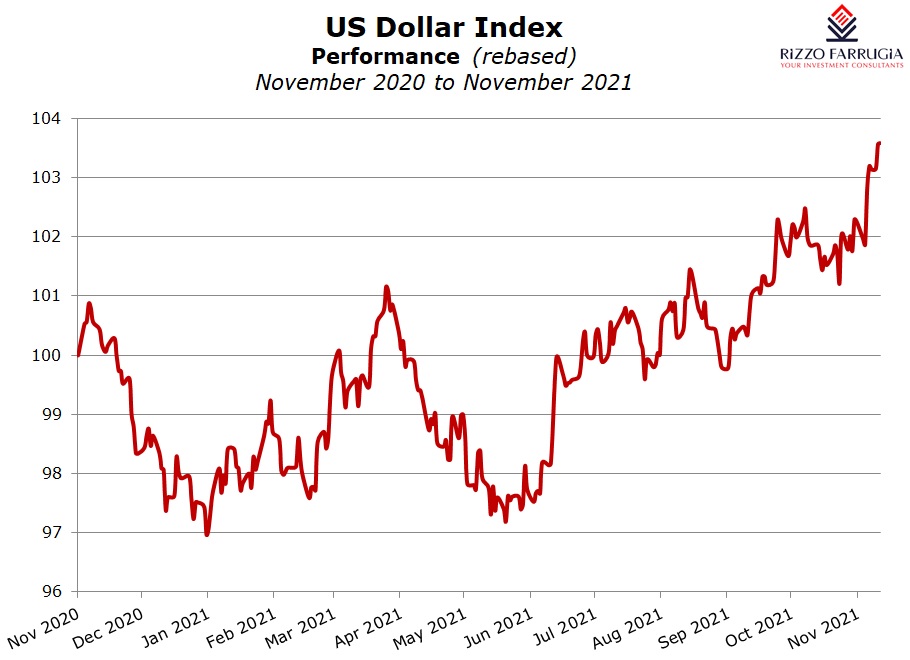 In my view, the determining factor driving the performance of the US Dollar in the coming months will be how the Federal Reserve will manage to smoothen the process of achieving its monetary policy objectives. As such, the central bank has a very delicate task in tightening monetary policy following the extraordinary stimulus unleashed after the outbreak of the pandemic to curb the persistent threats posed by high inflation, but at the same time maintain enough support to the economy during a period of transition which is also being hampered by substantial supply-side disruptions. Another important consideration is also how the US will regain fiscal discipline in the years ahead – a matter which exerts considerable influence on the performance of the US Dollar, and which has both economic/financial as well as political implications given the fragile control of the US Congress by the Democratic Party.

Beyond the US, since the performance of a currency signifies relative strength or weakness against another currency, developments taking place in other regions also have significant impact of how the US Dollar fares in the coming months. In the euro area for instance, the European Central Bank seems to be at an earlier stage in its path to normalising monetary policy when compared to the Federal Reserve, possibly reflecting the structural weaknesses of the single currency block when compared to the US economy. This might lead to more evident signs of monetary policy divergence going forward which may also translate into wider spreads between US Treasuries and German Bunds yields apart from the relative underperformance of the Euro against the US Dollar.

Although some investors may not feel entirely comfortable with having investments that are not denominated in their home currency, the diversification aspect of any portfolio ought to be extended to the currency element as well, over and above the type of asset class invested in. While exchange rate volatility can never be eliminated, investors must also take note that exposures to other leading currencies other than the Euro – such as the US Dollar or the Pound Sterling – should be considered as an investment in itself apart from serving as a springboard for broadening the potential investable universe. However, this must be done in the context of the overall investment objectives, expectations and risk profile of the investor whilst always maintaining a long-term and disciplined approach to investing.