In some of my articles over recent years, I delved into exchange rate movements over different time periods mainly with respect to the value of the EUR against both the USD and the GBP since these are the main currency movements that are mostly monitored by Maltese investors.

The EUR vs USD exchange rate exhibited a high degree of volatility throughout the course of 2020. It started off the year at the USD1.12 level and the US Dollar strengthened markedly towards the third week of March to almost USD1.06 following the approval by the US Senate of the historic USD 2 trillion stimulus package (the largest emergency aid package in the country’s history) on 25 March. At the time, the US Dollar was also seen as a natural ‘safe haven’ amid the huge turmoil across financial markets due to the COVID-19 pandemic.

The US Dollar weakened again to above the USD1.11 level shortly afterwards and traded in a relatively tight range until the end of May.

However, the euro rally gathered momentum from the end of May as the market digested the European Commission’s proposal for a €750 billion ‘Next Generation’ recovery fund, financed by mutual debt issuance and delivered in a combination of loans and grants to eurozone members. One of the major factors that was negatively impacting the performance of the EUR in earlier weeks was the re-emergence of fears over a break-up of the single currency but the ‘Next Generation’ recovery fund was widely interpreted as a rare landmark achievement in terms of solidarity and unity across the EU.

During the second half of 2020, the US Dollar was being negatively impacted by the heightened uncertainty on the US economic outlook due to the wider spread of the pandemic as well as the outcome of the Presidential elections.

The EUR vs USD exchange rate ended the year at the USD1.23 level. The US Dollar thus weakened by 9.9% against the euro and towards the end of last year many analysts who were issuing their forecasts for 2021 for the various asset classes were in general agreeing that the US Dollar would weaken once again during 2021. This assumption was based on a number of factors such as the extent of the efforts of the US Federal Reserve to keep interest rates low through bond buying and ultra-loose monetary policy as well as the growing debt levels in the US that may have restricted further options to stimulate economic growth.

However, the US Dollar has been recovering in recent weeks and is now at a five-month high against the Euro. The euro had appreciated to a multi-year high of USD1.2349 in early January 2021.

The dollar’s turnaround began as the newly elected US President Joe Biden pushed through the USD1.9 trillion American Rescue Plan in order to boost the economy following the shock brought about by the pandemic. Moreover, there was a ramp up in the pace of vaccinations across the US from about 900,000 doses per day to almost 3 million doses daily raising hopes of a faster and broader economic rebound from the pandemic.

In fact, over recent weeks there were a series of dramatic upward revisions to forecasts for GDP growth in America and the US economy is now expected to strongly outperform other developed economies. According to the OECD, the American Rescue Plan should add 3 to 4 percentage points to 2021 GDP. US GDP growth is now expected to be as high as 8% which will imply higher sales and profits for companies across the US indirectly leading to strong demand for the US Dollar.

Moreover, although the Federal Reserve dot plot published earlier this month suggests that interest rates will remain near zero until 2024, the interest rate differential is another factor that is supporting the US Dollar given the negative rates across other regions most notably in the euro area.

Most international financial analysts do not expect any change in the monetary policy measures by the European Central Bank anytime soon and interest rates in the EU are already the most negative in the world (with the exception of Switzerland) which makes it unattractive to hold onto the euro. A particular financial journalist actually commented that the “European Central Bank looks set to keep interest rates near zero indefinitely”. 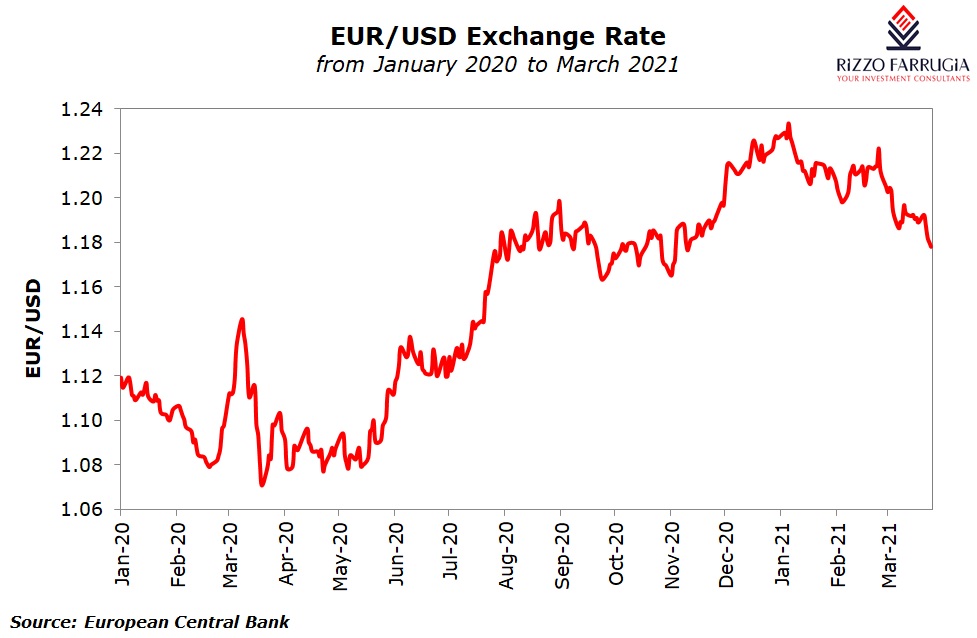 The euro was also dented by the slow pace and issues in the procurement of vaccinations, as well as rising COVID-19 infections across many countries leading to renewed lockdown measures in the major economies including Germany and France.

Some currency analysts are now anticipating that the US Dollar recovery will likely continue throughout the course of 2021 thus helping the greenback to recover part of the losses it sustained against the euro last year.

One of the reasons cited is that the large fiscal relief package of USD1.9 trillion could eventually lead to monetary policy normalisation by the Federal Reserve which should support the recent strength of the US Dollar. The superior economic growth being anticipated in the US compared to the eurozone economies should lead to higher inflation levels and quicker action by the Federal Reserve.

The recent volatility in the EUR vs USD exchange rate is being compared to the movements seen in 2017 and 2018. In 2017, as global economic growth was broad-based, the US dollar was on a declining trend but as the Federal Reserve hiked interest rates in 2018, the dollar strengthened accordingly. As such, with US economic growth largely expected to outperform most developed economies in a material manner in the months ahead which will eventually help economic growth in other regions, coupled with the vaccination rollout gathering momentum in Europe, some currency strategists believe that the US Dollar could weaken again in due course.

The EUR vs USD exchange rate is therefore likely to remain volatile in the months ahead given the various drivers of currency movements such as trade flows, relative interest rates and risk appetite.

While it is important to monitor currency movements from one period to the next due to the impact that this may have on the overall performance of an investment portfolio (especially when a major currency can gain or lose almost 10% in a single year as was the case in 2020), it is also important for long-term investors to gauge whether the movement in currencies is one of the main factors that should be considered in the context of the overall structure of one’s portfolio.

Any long-term investment portfolio should have exposure to the US Dollar given the sheer size of the US financial market and the quality of the companies present in the US as has been notable especially in the technology sector in recent years. As such, while it may be important to exert discipline on the exposure to a currency other than one’s home currency, this must also be seen within the overall objectives of an investment portfolio. When constructing investment portfolios for long-term financial planning purposes, the annual movements in a currency which may be sizeable at times should not be the over-riding factor that lead to investment decisions. Hopefully, over time, these currency movements would be outweighed by capital gains as evidenced by the compound annual growth rate of the S&P500 of nearly 12% during the past 10 years.