Although the main international financial headlines in recent weeks were dominated by the conclusion of the US-China ‘Phase 1’ trade deal, and later by the outbreak of the coronavirus pandemic, another important development which took place was the sharp downward trend of the euro currency against virtually all major currencies.

The rapid decline may have come as a surprise to many investors who, on a regular basis, closely follow the various movements across international foreign exchange markets. In fact, the euro dropped to a fresh 34-month low against the USD last Friday of USD1.0828 compared to USD1.1212 as at the end of 2019. In this respect, the 3.4% drop since the start of the new year must also be viewed in the context of the 4.5% decline in 2018 and a further decrease of 2.2% in 2019. These losses reversed a substantial part of the incredible rally of over 21% which the euro recorded between the start of 2017 (when it had touched a 14-year low of USD1.0341) and mid-February 2018 when it had even managed to break through the USD1.25 level.

Similarly, the euro had reached the CHF1.20 level in April 2018 – the highest level since early January 2015 when the Swiss National Bank (Switzerland’s central bank) had dropped its three-year old cap of CHF1.20 against the euro. Since then, the euro was on a continuous downward trend against Europe’s safe haven currency as it shed nearly 12% over the past 22 months.

What was the cause for the ailing euro currency? Two plausible reasons emerge which are closely intertwined with each other. First, following the euro sovereign debt crisis, and supported by the huge amount of monetary stimulus by the European Central Bank, the eurozone economy started registering encouraging growth which, in 2017, reached a ten-year high of 2.5%. This was followed by a lower growth rate of 1.9% in 2018 as the first signs of fatigue started to show up especially due to the various uncertainties that were being created in the second half of the year related to the trade relationship between the US and China.

In 2019, the economic performance of the eurozone worsened considerably whilst inflation remained stubbornly low. In fact, the eurozone economy grew by just 0.1% in Q4 2019 when compared to Q3 2019 – the weakest pace of expansion since a contraction was recorded in Q1 2013. Germany, which is Europe’s largest economy, recorded 0% growth during the final quarter of the year while the Italian and French economies contracted. Furthermore, the situation in Germany was also recently hampered by heightened political uncertainty following the resignation of Ms Annegret Kramp-Karrenbauer as leader of the CDU party and likely successor of Merkel as Chancellor. Overall, in 2019, eurozone GDP grew by only 0.9%, falling short of the estimated 1.0% growth.

Meanwhile, last week, the European Commission published its revised economic forecasts showing that GDP growth across the eurozone will remain stable at 1.2% in both 2020 and 2021. The forecast for inflation in the eurozone was raised to 1.3% in 2020 and 1.4% in 2021, representing a slight increase when compared to the previous forecasts.

In view of the weak economic and financial data, there are growing expectations that the ECB could adopt a more dovish stance and implement further easing measures through additional quantitative easing in the months ahead. In fact, the new President of the ECB, Christine Laggard, recently defended the case for lower interest rates and left the options open for more stimulus in the future if the need arises.

On the other hand, the President of the Federal Reserve, Jerome Powell, recently aired a cautiously optimistic view on the state of the US economy by explaining that the current expansion of the US economy is expected to continue on the back of solid performance in the labour market, resilient corporate earnings and high consumer spending and as such, the current monetary policy is considered to be appropriate in the present circumstances. Accordingly, the Fed Chairman also indicated that he sees no particular reason for a further reduction in interest rates thereby further supporting the US Dollar.

In contrast, the ECB recently launched a “strategic review” of its monetary policy, which is due to be ongoing throughout 2020 with some analysts already anticipating that the central bank might drop or bend its long-run inflation objective of close to the 2% level.

In view of the above factors, it may seem unlikely that the euro will start to recover meaningfully in the near-term. Some international analysts have also been questioning whether the euro-parity against the US Dollar is again a possibility although forecasts by a number of other commentators vary widely on the possible future direction of the EUR/USD exchange rate. 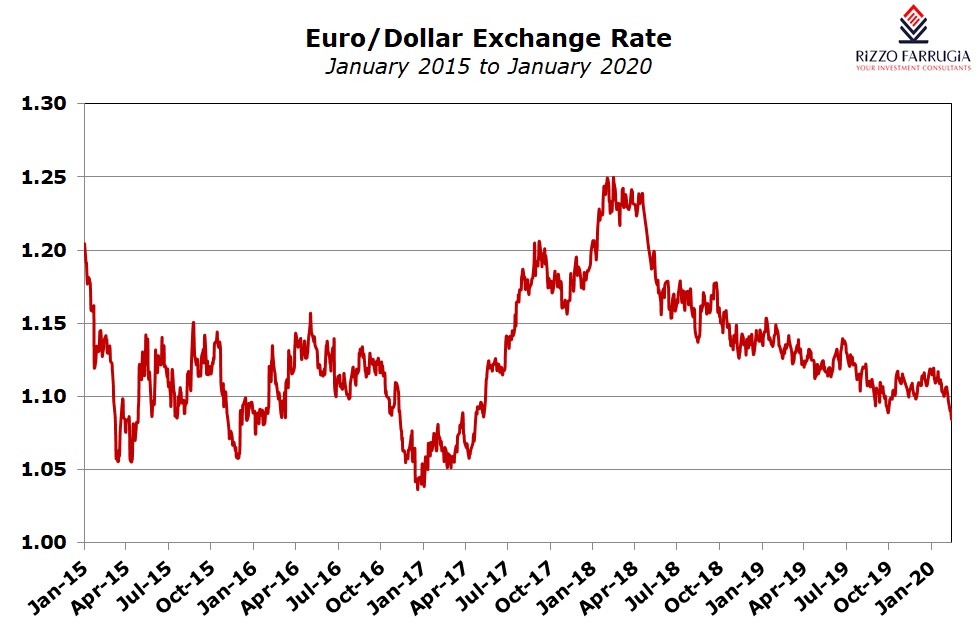 Some analysts believe that the euro may in fact weaken further since it is difficult for the eurozone economy and Germany in particular to register a sustained improvement in its economic performance. For instance, a prominent foreign exchange strategist at a major global bank believes that the value of the euro cannot rebound until there are clear signs of an economic recovery. This analyst argues that if the recent easing measures by the ECB fail to deliver significantly higher inflation or economic growth, then it would clearly indicate that there is limited room for further monetary policy easing which is likely to remain a negative factor for the euro currency. At that point, a weaker currency may be the only way to deliver looser financial conditions in the eurozone. Moreover, this same analyst highlighted the possibility that the US administration increases its focus on targeting European exporters and implements an increase in tariffs on EU goods moving to the US. This would be another negative driver for the euro.

However, other analysts are anticipating a strengthening of the euro against the US Dollar during the course of 2020. While most investors would expect such a recovery to take place only should there be an improvement in the performance of the eurozone economy in 2020, others point to the slowing rate of growth of the US economy which will mainly impact the EUR/USD exchange rate over the coming months. The US economic growth rate is forecast to ease from 2.3% year-on-year to 1.8% in 2020. The investment house forecasting this view expects the euro to recover to the USD1.15 by the end of 2020.

A foreign exchange analyst at another prominent US bank is also predicting a recovery in the euro to the USD1.16 level within the next 6 to 12 months. The predicted rebound in the euro in 2020 is largely based on the assumption that growth rates across the eurozone will pick up and close the outperformance gap with the US economy. This investment house also argued that recent surveys by Germany’s ZEW institute indicate that corporate confidence in Germany is recovering notably following last month's 'Phase 1’ trade deal to suspend the trade war between the US and China giving rise to the hope that the trade dispute’s negative effects on the German economy will be less pronounced than previously thought.

Another foreign exchange analyst at a major European bank is also forecasting a slight recovery in the EUR/USD exchange rate despite an expected lacklustre performance from the eurozone economy. Although this analyst argued that the weakness in the eurozone economy could lead to a further interest rate cut in the first quarter of the year and additional quantitative easing by the ECB, the current exchange rate also reflects this possible scenario and as such a slight improvement in economic and inflation data will be positive for the euro. On the other hand, this analyst also anticipates that some main indicators for the US economy which have not yet weighed on the value of the currency will eventually lead to a weakening dollar. The analyst highlighted the widening of the US current account and fiscal deficits as one of the main drivers that would lead to a weaker US Dollar partly due to the tax cuts introduced by Trump when he won the election in line with his electoral pledge to boost the economy through major fiscal incentives and infrastructural projects. Moreover, the analyst also expects the US economy to weaken in the coming months leading to one more rate cut by the Federal Reserve during the first quarter of 2020.

At this point, it is worth asking how the value of the euro impacts Maltese investors. In this respect, investors who have their investment portfolios solely focused on securities denominated in euro will not be impacted from the latest developments although wide movements in exchange rates may negatively impact the financial performance of companies in specific sectors which can lead to volatility in share prices.

This volatility is expected to continue as a result of the multitude of factors impacting share prices and exchanging rates, some of which can be rather unexpected such as the latest coronavirus pandemic. The extent of damage that coronavirus will inflict on the Chinese economy and the likely spillover effect on the eurozone and the US economies is unknown. However, as the German economy is primarily a manufacturing and an exporting one, it is regarded as more vulnerable from a slowdown in China than the US economy.